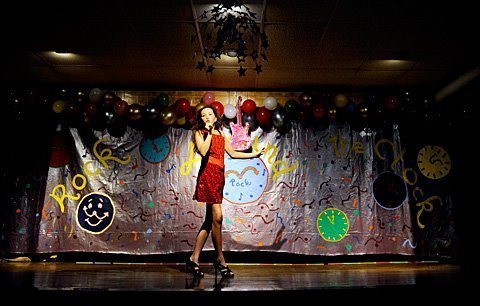 Seventh-grader Clare McCulloch channels Tina Turner as she performs the song "Proud Mary" during the May 10 Humanities Show at St. Francis-St. Stephen School in Geneva.

GENEVA — The crowd began to cheer as a man with a curly brown beard and another with a waist-length blond beard walked onstage.

Both carried guitars, and they were followed by a man with a bushy brown mustache, who quickly took his place behind a drum kit. As the opening strains of ZZ Top’s "Sharp Dressed Man" began to play, the band members waved the crowd forward and a crush of young children rushed the stage and began jumping up and down to the driving beat of the music.

Does this sound like a typical scene from a Catholic school?

It does if the school in question is St. Francis-St. Stephen School in Geneva on the day of the school’s highly anticipated Humanities Show. Students in Jeanette Hernandez’s seventh-grade humanities classes have put on the show nearly every year since the mid-1990s and say it’s one of the things they most look forward to about their middle-school years. The show is a way to reward students for good behavior and grades while also helping them learn about post-World War II history and music, said Hernandez, who also teaches art and Spanish at St. Francis-St. Stephen.

This year’s event was especially poignant because it was St. Francis-St. Stephen’s final Humanities Show. The school’s humanities program has been cut for next year, Hernandez explained.

"It’s too bad because being where we are, we don’t have access to music halls and museums. It was the whole purpose (of the show) to give exposure of the arts to the kids by utilizing a limited budget. We tied in a lot of social studies curriculum into the program. Humanities touched on the human condition and human reaction to things that went on in the world," she said.

Preparation for the show begins in January, when Hernandez’s students learn about the music that was influenced by events such as the civil rights movement, the Vietnam War, and the assassinations of President John F. Kennedy and Martin Luther King Jr. The students each then choose and research a singer or group and create an album cover that includes facts about the chosen artist or artists. Students who have kept their grades up consistently and who have not had to be sent to the office for disciplinary reasons are allowed to choose one of their artists’ songs to lip sync to during the Humanities Show. The students spend several weeks choosing their stage wardrobes, learning the lyrics to their songs and perfecting their performances. This year eighth-graders who met the same criteria also were able to participate in the show.

"This is a reward for a job well done," Hernandez said, noting that the show provides a good incentive for her students. "Every kid up there had high grades. No one had any outstanding assignments due in any class. Every kid on that stage was passing every subject."

Working together to put on the show also helps students learn the importance of taking care of each other, Hernandez added.

"We all have our talents. Some of us need help. They were there to provide any kind of help anybody needed. To me that is a combination of every religious lesson they’ve ever learned," she said.

The theme for this year’s Humanities Show was Rock Around the Clock, and the student performers put on two shows during the day for their fellow St. Francis-St. Stephen students as well as an evening show for parents who couldn’t make the earlier show times. Attending those daytime shows as a young student in the elementary grades made Teresa Pietrusinski yearn for the day she’d be old enough to participate in the show.

"Ever since I saw my first show, I wanted to do it," said Teresa, who as a seventh-grader finally was able to realize her dream this year.

"I saw my (older) sister do it and I wanted to do it, too," added fellow seventh-grader Savannah Bradley.

When their turns finally came, Savannah and Teresa decided to choose a musical act that would allow them to work with their best friend, Clare McCulloch. The three friends took the stage together on May 10 to perform the Pointer Sisters’ "I’m So Excited." The Pointer Sisters were the perfect choice because "we’re kind of like sisters," Clare explained.

"I heard that song before and I thought it would be a good song for me to do because it’s kind of my personality. I also chose it because I thought it has a good beat and it was fun to do," she said.

Teresa and Savannah also took to the stage twice. Teresa got to perform one of her favorite songs, "Black Velvet," as she portrayed Alannah Myles, and Savannah served as her guitar player.