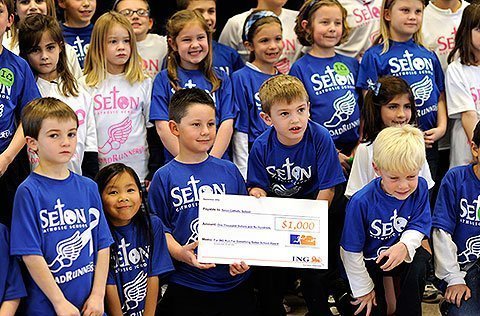 Members of the RoadRunners running club at Seton Catholic School in Brighton gather around a $1,000 check donated by ING Nov. 15.

That’s the goal of the running club at Seton Catholic School in Brighton, according to Seton parent and local pediatrician Dr. Correne Wirt.

Wirt said when she first volunteered to assist at a session of Seton RoadRunners club, she was hooked.

"After the very first session, the kids sat down, and they all got still," noted Wirt of how the club tapped some of the pent-up energy of its young participants.

Now Wirt, who has a first- and third-grader at the school, helps to develop activities for the student runners. She said she is a fan of the RoadRunners because she sees the harms of childhood obesity each day.

"They think they are having fun," Wirt added of the club’s members. "They don’t realize they are running for an hour."

The rise in childhood obesity is one reason why running clubs have taken off among children, according to these clubs’ organizers. Nationally, rates of obese children ages 6 to 11 years old spiked from about 4 percent in the early 1970s to 20 percent in 2007-08, according to the President’s Council on Fitness, Sports and Nutrition.

For four years in a row, All Saints Academy in Corning has topped schools its size in the state in the council’s presidential physical fitness challenge, which tests students in endurance running/walking and shuttle/sprint running, as well as flexibility, pull-ups and sit-ups. The school’s successful showing is a reflection of its focus on active living, said Tom Ketchum, All Saints physical-education and health teacher.

A group of students from the school also have signed up for a local running club started by marathon runner Jim Derick and his wife, Sue. Ketchum helps coach that club, although it is not affiliated with the school. That club has seen great success; four of its members who attend All Saints — Cleo Baker, Alivia Collins, Angela Collins and Faithe Ketchum — recently competed in the National Junior Olympics finals in Albuquerque, N.M.

"It motivates me to see the kids out there too," Ketchum said. "If they are running, I’ve got to be out there running to be a good example for the kids."

Ketchum said in both gym class and in the running club he stresses proper technique and the healthy living goals of the Greater Rochester Health Foundation’s Healthy Hero campaign: five servings of fruits and vegetables a day, less than two hours of screen time, one hour of active play a day and zero sugary drinks.

"It allows the child to be in competition with himself, and it’s a healthy habit they can develop at a young age," said Sister Lurz, who also helped start the Seton running club, since she served there as principal until 2008.

Seton’s club started in September 2005 with 26 runners, and it has grown to more than 70 runners each season; club members run outside in the fall and spring as weather permits. Last school year the running club expanded to kindergarten through second grades.

This year the club received a national grant from ING, a financial-services company, to support an expansion to kindergartners through second-graders at the school.

"One of the ways (ING gives) back to the community is by supporting runners and schools that have running clubs," said Adrienne Cavallaro, a Brighton resident and a registered representative with ING.

The running club helps to encourage students to stay fit in the off season, said parent Mark Cook, who volunteers as Seton’s athletic director. It also is a way for students who don’t play team sports to stay active, he said, noting that parents have helped to get the club off the ground and are encouraged to run with their children.

"We have a very robust parent volunteering program," Cook said.

Wirt, the Seton parent and pediatrician, noted that running can be an inexpensive sport for kids to pick up; they only need shoes and a water bottle. Running club participants also received T-shirts. One of the few expenses the running program has incurred is for orange cones — the more, the better, Wirt said.

"I think the biggest compliment I got was the kids said, ‘We don’t do any running at running club, we just play games,’" she remarked.

Parents give the club high marks.

"The kids got so much energy out," said Joy Ramsey of Pittsford, whose 7-year-old son, Jack, attends Seton Catholic. "They loved it. They had the obstacle courses and they ran around the school. He wants to do it again in the spring."

"I just think that running club is really cool," said Lucci Pagano, 7, a first-grader from Rochester.