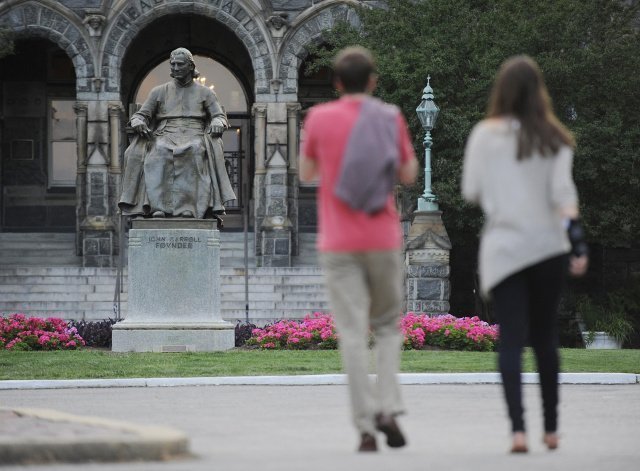 Students on the campus of Georgetown University in Washington pass a statue of Archbishop John Carroll, Baltimore’s first archbishop and founder of Georgetown.

WASHINGTON (CNS) — The Archdiocese of Washington has criticized a Georgetown University student group’s invitation to the president of Planned Parenthood to speak on campus.

In a statement, the archdiocese said the issue is not about free speech because "lacking in this choice by the student group is any reflection of what should be an environment of morality, ethics and human decency that one expects on a campus that asserts its Jesuit and Catholic history and identity."

Georgetown University officials defended the students’ invitation, saying in a statement that the issue is a matter of "sustaining a forum for the free exchange of ideas … even when those ideas may be difficult, controversial or objectionable to some."

In its statement, the archdiocese said: "One would prefer to see some recognition by this student group of the lives and ministry, focus and values of people like Blessed Oscar Romero, Blessed Teresa (of Kolkata) and Pope Francis in place of that group’s seemingly constant preoccupation with sexual activity, contraception and abortion."

It added: "The Archdiocese of Washington is always open and ready to dialogue with the students, faculty and administration of the university on issues of such significance."

"The apparent unawareness of those pushing the violence of abortion and the denigration of human dignity that there are other human values and issues being challenged in the world lends credence to the perception of the ‘ivory tower’ life of some on campus," the archdiocese said.

Georgetown noted that Richards is not being paid to speak. "Student groups may invite any outside speakers and guests to campus. An appearance of any speaker or guest on campus is not an endorsement by the university," it said.

The Lecture Fund, according to its website, is "a nonpartisan student-run organization that exists to enrich the academic experience of the Georgetown community. The Lecture Fund strives to bring speakers to Georgetown’s campus to enlighten, educate and, occasionally, entertain."

The university said it recognizes "that the perspectives of some speakers (invited by the Lecture Fund) run counter to the Catholic and Jesuit values that animate our university."

"We work very hard to ensure that these values maintain a privileged place in our community while at the same time providing a forum that does not limit speech either in the content of the view being expressed or the speaker expressing the view," the university said.

The Washington Archdiocese suggested that "those so interested in learning more about the killing of unborn babies and respect for the dignity of all human life" look at a recent issue of America magazine "that speaks at length about the extent of violence and persecution the people of faith around the world suffer."

"It would be beneficial," said, "for these Georgetown University students to learn more about these serious problems in the world."

The Lecture Fund, according to its website, "consists of only undergraduate students. We extend invitations to any and all speakers, they accept or deny the invitation, and we plan accordingly."

On its website, the group said Richards’ talk "is not open to the public and only those with a Georgetown University ID will be allowed to attend. The event will consist of remarks, followed by a question and answer period."

The Archdiocese of Washington statement said, "The contribution to a better world today can take inspiration from the Gospel and its proponents such as Pope Francis and from the Jubilee Year of Mercy rather than from the organized efforts to facilitate the violent destruction of unborn children,"

It added: "The Jesuit community on campus clearly has its work cut out for it and a long way to go as it tries to instill at Georgetown some of the values of Pope Francis."

News of Richards’ planned speaking engagement was first reported by the Cardinal Newman Society on its website.

Cardinal Newman Society president Patrick Reilly noted on the group’s website that "disguised as an academic event, this (Richards’ talks) is nothing more than a platform for abortion advocacy at a Catholic university and under the nose of the Catholic bishops."

Founded in 1993, the society states its mission is "to promote and defend faithful Catholic education … (through) supporting education that is faithful to the teaching and tradition of the Catholic Church; producing and disseminating research and publications on developments and best practices in Catholic education; and keeping Catholic leaders and families informed."

"Besides a clear bias in the choice of speakers, there’s no sense of moral truth, which is the central point of a Catholic university," Reilly said on the website. "Either you accept Catholic moral teaching as true or you do not."

The Catechism of the Catholic Church teaches that abortion is morally wrong because "human life must be respected and protected absolutely from the moment of conception. From the first moment of his existence, a human being must be recognized as having the rights of a person."

In his 1995 encyclical "Evangelium Vitae" ("The Gospel of Life") St. John Paul II said: "Abortion willed as an end or as a means, always constitutes a grave moral disorder, since it is the deliberate killing of an innocent human being."

Szczepanowski is a staff writer at the Catholic Standard, newspaper of the Archdiocese of Washington.