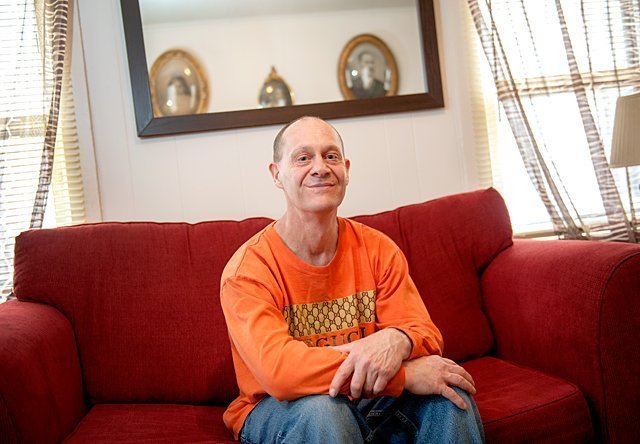 Larry Keyser has experienced bouts of drug addiction and homelessness over the years, but thanks in part to assistance from Catholic Charities of Chemung/Schuyler, he has a new start and his own apartment in Elmira.

ELMIRA — During the night and early morning of Jan. 27-28, with temperatures hovering just above the freezing mark, some 18 people were found sleeping outdoors, in cars and inside unheated structures throughout this modestly sized city.

Meanwhile, another 34 folks — including 10 children — came to the Catholic Charities of Chemung/Schuyler facility on South Main Street seeking shelter.

And these were just the known cases of homelessness to emerge from a Catholic Charities-led study.

Suzi Fritz, coordinator of Catholic Charities’ Emergency Services, noted that many additional people likely spend each night under bridges and in abandoned properties around town — as well as in outlying areas — even during the cold of winter.

Fritz said these numbers dispel the myth that homelessness is only an issue in large cities where the problem is more visible. Indeed, Larry Keyser, a lifelong Elmira resident, remarked that "from my view, anybody can become homeless."

Keyser knows this firsthand. The 55-year-old has experienced chronic bouts of homelessness and prison time over the past two decades — yet during his younger years, he never foresaw his life turning out as such.

"Truly, honestly, absolutely no," Keyser said, acknowledging that he lost his home, wife and freedom largely because of drug addiction: "It was a smooth ride; I was in complete control until I let the drugs come into my life. I take full responsibility."

Fritz said several potential factors can result in homelessness, such as eviction, family strife, or being released from a jail, hospital or rehabilitation center with nowhere to go. Many other homeless folks, she added, simply favor their lifestyle for reasons of independence.

Lindsay Winters, Catholic Charities of Chemung/Schuyler’s director of development, further noted that numerous homeless people contend with mental and/or emotional issues that stand in the way of getting help.

"They don’t necessarily see there’s a problem or know there’s a solution. The problem is overpowering for them," Winters said.

In an effort to track the local depth of homelessness, Catholic Charities conducted a Point in Time Study featuring its late-January count of homeless people. The initiative also involved agency staff conducting interviews at community organizations and places where the homeless might come to warm up, such as libraries and the bus station.

When homeless people were encountered, Catholic Charities offered them supplies as well as information about services available through its agency and others. Supplies also were left in settings where people obviously were living, such as areas where there were mattresses on the ground.

"Because we are the local provider of homeless services, we know of some of these locations," Winters said. 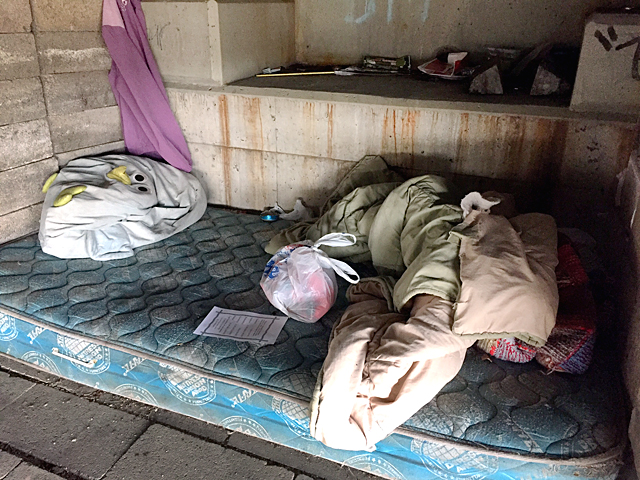 During a 2015 survey of homelessness in Chemung and Schuyler counties, Catholic Charities workers found ample evidence of people living on the streets of Elmira.

Assisting in the one-day Point in Time effort were health-care, social-service and police organizations. The study, conducted annually, is part of an ongoing attempt to assess homelessness in Chemung and Schuyler counties. Winters said that although this project has grown in scope, greater local awareness is still needed.

Fritz added that many don’t realize homelessness also exists in rural areas, such as people living in old farmhouses that don’t have running water or heat.

Winters and Fritz said that study results have a direct impact on funding Catholic Charities receives from the U.S. Department of Housing and Urban Development.

"The more evidence you show for need in your community, the more (financial) help you receive, hopefully," Fritz said.

She added that the need has grown since Gov. Andrew M. Cuomo’s executive order in early January requiring local governments across the state to place homeless people in shelters when temperatures reach 32 degrees or below. As such, Catholic Charities’ 12-bed Second Place East shelter, located at 605 College Ave., has experienced high demand this winter. Fritz said that when requests reach overflow levels, she places people in local motels overnight or with family members or friends.

Catholic Charities’ support of the homeless and others in need helps increase the odds of success stories such as Keyser’s. In early February he left Second Place East after a two-month stay to move into a new apartment arranged by another Catholic Charities ministry — the Gateways Community Living Program, which assists at-risk individuals and families with housing.

Keyser expressed gratitude to Catholic Charities for aiding him in his attempt to start a new life and stay off the streets, where he would be more prone to a relapse.

"They’ve been a spectacular help, more than I can express," he stated. "Otherwise I’d be knocking on doors and subject to a lot of negativity."