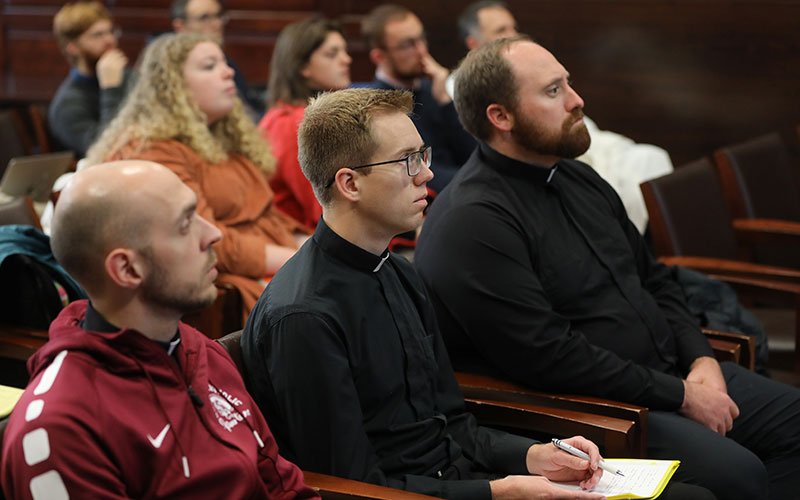 WASHINGTON (CNS) — A study of U.S. priests released Oct. 19 details clerics’ “crisis of trust” toward their bishops as well as fear that if they were falsely accused of abuse, prelates would immediately throw them “under the bus” and not help them clear their name.

The study “Well-being, Trust and Policy in a Time of Crisis” by The Catholic Project, written by Brandon Vaidyanathan, Christopher Jacobi and Chelsea Rae Kelly, of The Catholic University of America, paints a portrait of a majority of priests who feel abandoned by the men they are supposed to trust at the helm of their dioceses.

And while the study says priests overwhelmingly support measures to combat sex abuse and enhance child safety, the majority, 82%, also said they regularly fear being falsely accused. Were that to happen, they feel they would face a “de facto policy” of guilty until proven innocent.

The study, unveiled at The Catholic University of America in Washington, documents the environment between priests and their bishops in light of the “Charter for the Protection of Children and Young People” instituted in 2002 by the U.S. Conference of Catholic Bishops.

Commonly referred to as the Dallas Charter, it sets in place policy about how to proceed when allegations of sexual abuse of children by clergy or church personnel come to light.

“Indeed, many priests feel that the policies introduced since the Dallas Charter have depersonalized their relationship with their bishops; they see bishops more as CEOs, bureaucrats, and legalistic guardians of diocesan finances than as fathers and brothers,” the study points out and quotes a diocesan priest saying: “Our archbishop is a remote figure. Not at all personable. Not approachable. He appears to be a busy CEO and religious functionary.”

Some priests says zero-tolerance police is “too harsh”

The document reveals that 40% of the priests who responded said they see the zero-tolerance policy as “too harsh” or “harsher than necessary,” adding that it’s too easy to lodge false claims of abuse against them. They feel bishops would not support a priest in the period necessary to prove his innocence.

“There’s this sense … that the bishops are against a priest who’s been accused, rather than doing what the bishop must do but still supporting the priest,” said one of the 100 priests that researchers interviewed in-depth.

“Most priests agree with the church’s response to the abuse crisis, but also fear that their bishops wouldn’t have their backs if they were falsely accused,” said Vaidyanathan, one of the study’s authors.

Of the 10,000 diocesan and religious priests surveyed, just 24% said they had confidence in U.S. bishops in general. Instead, priests in the study said they predominantly see the prelates as social climbers, careerists and administrators who barely know priests in their diocese by name.

“They’re really not leaders or they’re just kind of chameleons … looking to climb up the ladder.”

The study says 131 bishops also participated in the study, which analyzed attitudes about priests’ well-being, trust and the policy related to the sex abuse crisis.

In response to the study, the USCCB’s Public Affairs Office released a statement by Bishop James F. Checchio of Metuchen, New Jersey, chairman of the organization’s Committee on Clergy, Consecrated Life and Vocations.

“I am grateful for the insight provided by this study which will assist the bishops in our ministry to our priests. While not surprised, I am heartened that the results report priests have such a high level of vocational fulfilment and that they remain positive about their priestly ministry,” Bishop Checchio said in the Oct. 19 statement.

Referring to a figure in the document showing that 77% of the priests in the study could be categorized as “flourishing,” saying they felt fulfilled and had a sense of meaning and purpose, with 4% reporting they were thinking of leaving the priesthood.

“Our priests are generous and committed,” Bishop Checchio continued. “While acknowledging that circumstances will vary from diocese to diocese, the findings of this study are overall valuable in that they remind us of the importance of being always attentive to the care of our priests with the ever-growing stressors they experience in ministry, while we strive to address any issues that have damaged the unique relationship we enjoy.”

The relationship between priests and bishops

The study says that the “erosion of trust between a priest and his bishop” affects the level of well-being of a priest, and those with more trust fare better than others.

It also points out a great disparity of perception between the two groups, with bishops overwhelmingly seeing their role as more supportive of clerics. The majority of bishops surveyed said that they felt their role was akin to a brother, a father, a shepherd, a co-worker, when it came to dealing with priests.

Priests said strengthening relationships with bishops, having more social interaction with them, have the prelates know their names, communication, transparency about processes, as well accountability on prelates’ part would help alleviate the existing erosion of trust.

“The hope is that if we were to do the same survey five years from now, things would look different,” Stephen White, of The Catholic Project, said in a statement released before the presentation.

“Priests are happy in their vocations, but we also want them to feel less anxious and more supported. I know the bishops want that too. Hopefully this data can help in that regard,” he said.

Priests in the study also said they felt like cogs in the wheel, seen by bishops as liabilities. Some of the attitudes varied between diocesan priests and those who belong to a religious community, with those who were part of a religious order reporting more support.

The study also said that “at least some” of the mistrust comes from the way priests see “the application of policies created in the wake of the abuse crisis,” even as some bishops helped cover up abuses or were accused of being abusers themselves.

“Perhaps some bishops see themselves through rose-colored glasses,” a summary of the study said. “Or perhaps priests, in a beleaguered and prolonged state of stress and uncertainty, unfairly characterize their bishops through a lens of cynicism and fear. Or perhaps there is some truth to both perspectives.”

Tags: Holy Orders, USCCB
Copyright © 2022 Catholic News Service, Inc. All rights reserved. Linking is encouraged, but republishing or redistributing, including by framing or similar means, without the publisher's prior written permission is prohibited.