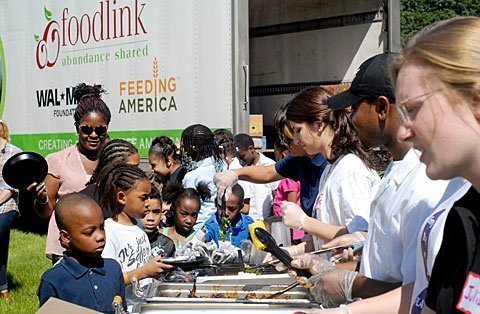 Children line up for a Freshwise meal outside The Community Place during a Foodlink summer meals outreach event June 2.

ROCHESTER — When less than a quarter of students who qualified were fed free daily summer meals last year, the community agencies that supply that food knew they had to take a different approach to reaching families.

So Foodlink partnered with HealthiKids — a Finger Lakes Health System Agency program created to promote healthier eating and physical activity in children — to help get the word out this spring. Through Foodlink children are fed throughout the summer at 60 sites in Rochester. The other partners in this initiative are the city’s recreation department, which also provides meals and activities at its centers, and the Rochester City School District, which provides meals to students enrolled in summer schools, explained Rachel Pickering, HealthiKids’ program manager.

As part of the outreach effort, Foodlink and Freshwise — which prepares the food that is served for afterschool and summer meals programs — served a special meal June 2 at The Community Place, one of the summer meals sites.

About 12,000 summer meals are served at the center, said Todd Waite, the center’s director of youth development.

Children in the Parsells Avenue center’s afterschool program as well as neighborhood children who walked over to the event each were served a meal of grilled barbecue chicken, corn on the cob, caesar salad, an apple and a cranberry oatmeal cookie. They also jumped rope and drew pictures of their favorite fruit or vegetable.

Christine Bryant-Clark walked to The Community Place with 11 of her young cousins after receiving a flier about the event.

"It’s a great program," she said about providing summer meals to children. "A lot of families need it and really don’t know about it."

About 40,000 children between the ages of 5 and 18 are eligible for the summer meals program, but only 8,000 were served last year, Tedesco noted.

"Clearly, a lot of kids are not eating or eating a less healthy alternative," Pickering remarked.

Officials acknowledged that some children may participate in programs that aren’t part of Foodlink or may travel during the summer, but, Tedesco added, Foodlink would like to see more participation of children and enrollment of additional sites. To promote community awareness was the basis for HealthiKids’ role in the program this year, Pickering said.

Even though the program has been around since the 1960s, "one of the biggest concerns we’ve been hearing from the community is they didn’t know a free healthy meals program existed," she added.

Some families also are now aware of the program’s flexibility as kids can just drop in to many of the sites, which also provide physical activity and enrichment programs in addition to daily breakfast and lunch meals, Pickering noted. No paperwork is required at most sites, she said.

"We’re not only combating hunger but doing it in a nutritious (and convenient) way (for families)," Pickering remarked.

HealthiKids staff members have been conducting outreach in the schools and community organizations as well as through the media to let as many people as possible know about the program, she explained. The agencies are even using such social media sites as Facebook and Twitter to get the word out and gear families toward the site closest to them, Pickering said. The more convenient a program is for a family, the more likely they are to use it, she added.

"Our agencies are trying to overcome the barrier of (the community) not getting enough information," Pickering said. "We want to raise the community consciousness."

As another component of the outreach initiative, Tedesco said Foodlink also will partner with the city recreation program’s staff members to conduct an assessment that will focus on:

"Our goal is to educate as many families as possible about the availability of summer meals sites in their neighborhoods and to increase participation at these sites," Tedesco added.

Pickering said that research has shown that children may gain weight during the summer without access to healthy meals such as the ones they can get through the summer program. If parents are working, children are likely to eat more processed foods and fast food meals. And if students are not participating in any physical activity as they would at the city recreation centers, they are more likely to return to school heavier, she said.

Foodlink is working to reverse these trends through the meals it serves to children — focused on exposing them to grass-fed beef and fresh produce as much as possible, noted executive director Tom Ferraro. Health experts warn that Americans’ current eating habits could lead to spending $1 of every $2 of public health care to treat diabetes by the year 2050, and Foodlink does not want to see that prediction become reality, he added.

According to information from the Yale Rudd Center for Food Policy & Obesity, rates of obesity for African-Americans and Latinos were higher than whites in 80 percent of states. The majority of Rochester’s student population is African-American, with Latinos comprising 21 percent.

The best way to reverse those trends is to replace empty calories of soda and processed foods with the types of meals Foodlink and its partners provide, Ferraro emphasized.