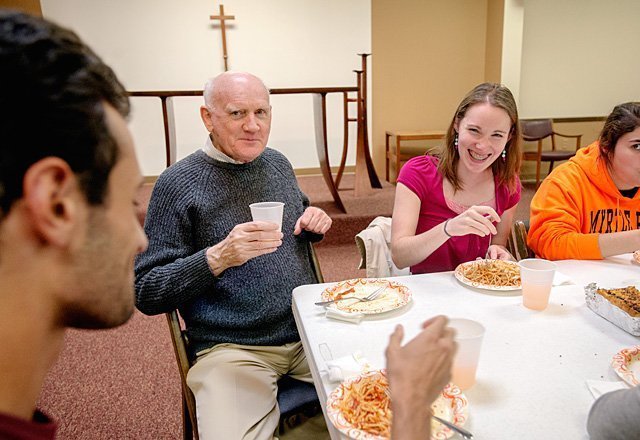 GENESEO — When it comes to satisfying various types of appetites, SUNY Geneseo’s Interfaith Center on Thursdays is the place to be.

Participants got a dose of spiritual nourishment during the weekly 5:15 p.m. liturgy on Sept. 18, which featured students as extraordinary ministers of holy Communion and lectors. As soon as Mass ended, student volunteers proceeded to haul long tables into the worship room — one of which was used to place bread, salad and a heaping container of spaghetti. Folding chairs from the Mass were rearranged so worshipers could transform into dinner attendees, thus addressing their physical hunger.

Throughout the ensuing meal, it was obvious that the 35 or so Newman Community participants — nearly all college students — also were assuaging their social appetites.

Lively conversation filled the air as young adults compared notes about their hometowns, areas of study and other aspects of campus life. Earlier, during the Mass’s sign of peace, there was an abundance of hugs, smiles and handshakes. At no time during the liturgy or spaghetti dinner did anybody appear to be left out.

With so many positive elements, it’s not surprising that the weekly Mass and free pasta dinner are a long-running success at Geneseo. According to Mike Sauter, the college’s Catholic campus minister, these gatherings have been going on for close to 25 years. He noted that approximately 80 Geneseo students are active in the Thursday get-togethers, with about half of them showing up at any one time.

"It’s a really nice way to release toward the end of the week," said volunteer Danielle Gerbosi, 21, while she fine-tuned the spaghetti sauce in the Interfaith Center’s kitchen prior to the Sept. 18 Mass.

"I think it’s a really positive experience, a really safe place to go whether (students) miss a home-cooked meal or want to connect with other people," added Gerbosi, a senior from White Plains, who has regularly attended the Thursday events since her freshman year.

"It’s good people, good food," agreed Tom Brett, 21, another senior who provides kitchen help. He is from Our Lady of Victory Parish in Rochester.

"You can sit down next to anyone and start talking," added Bernadette Erlichman, 20, a junior from Utica, pointing out that this provides a potential gateway to deeper ties: "You can build really great relationships that you take outside of Newman."

In addition, students have the opportunity to connect with many other offerings from the Newman Community. For instance, announcements at the end of Mass mentioned such activities as Sunday Mass, trips to the nearby Abbey of the Genesee monastery, a rosary group and a women’s group. "There are a ton of programs you can get involved in," remarked Gerbosi, who attends the weekly rosary group.

Sauter said the end result is a distinct spiritual community that bridges people with many different outside commitments, such as athletic teams and fraternities/sororities.

"Over the course of a year, it is so utterly rewarding for me to see how this thing builds. They get to know each other really well," observed Sauter, who also serves as pastoral administrator of St. Luke the Evangelist Parish in Livingston County. He noted that the lighthearted social climate on Thursdays has even spawned marriages.

On the other hand, students don’t necessarily show up to their first Newman Community event feeling at ease. In the Prayers of the Faithful on Sept. 19, Father Edward Dillon — a retired priest of the Diocese of Rochester who served as celebrant — prayed "for all the students in this wonderful place, especially those who are new and who are frightened." During his homily Father Dillon raised the importance of recognizing the person who stands apart from the crowd, suggesting that students be alert to such folks despite the busyness of college life: "Do we see the people who God puts across our path every day?" he remarked.

Sauter addressed this concern by singling out a freshman and a transfer student during the Mass, asking them to share basic personal information with the congregation — name, year in school, major, hometown and so on. Sauter explained to the Catholic Courier that since he’s at Mass every Thursday, he can easily detect new faces, adding that they’re in abundance at the start of a new school year. He acknowledged that it’s vital to draw such people into the community as soon as possible, lest they feel unwelcome and don’t ever return.

"If you just have a name early, it makes all the difference," he said.