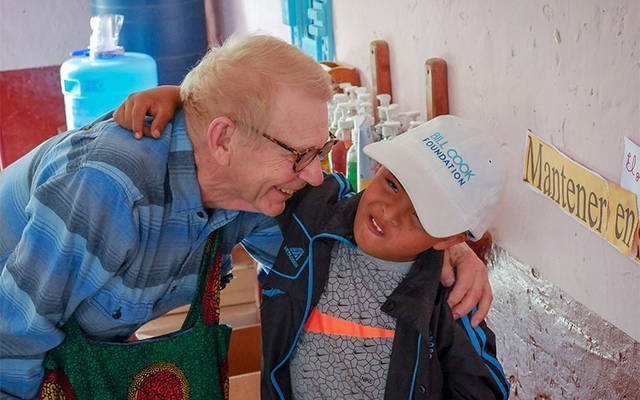 Bill Cook gives a hug to Jose, a child with Down syndrome, during a May visit to Huanaco, Peru. Through his nonprofit foundation, Cook works to provide educational opportunities for some of the world’s poorest children. (Photo courtesy Bill Cook) 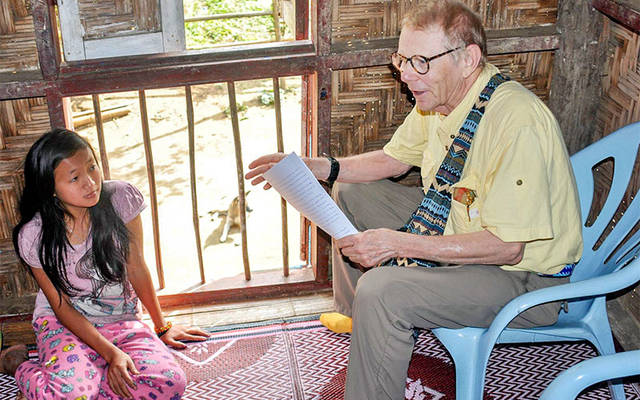 GENESEO — In 2007, while in Italy conducting seminars for college professors about St. Francis of Assisi, Bill Cook encountered a boy begging for money. He was a Romani — also known by the more derogatory term Gypsy.

Cook gave him a euro, and decided to spend some time with the youth while he continued to beg.

“You see the looks (from passersby) that say, ‘You dirty, crummy kid, get a job.’ To see the way the world looked down on him, that was very difficult,” Cook recalled.

That experience helped deepen a self-awareness by Cook that it wasn’t enough to be a scholar on St. Francis, whom he had studied intently for many years.

Cook decided that he also must model himself after the saint — whose feast day is Oct. 4 — by actively assisting the impoverished.

“At some point you have to say to yourself, ‘Why am I doing this?’ If I don’t learn how to live like Francis through my study, then it’s not very important. That’s what I came to realize,” Cook said. “How would I imitate Francis? If Francis were born into this world with my skill set, how would he live out his life?”

Cook’s skills involve education; he retired in 2012 from a 42-year professorship of history at SUNY Geneseo that included teaching several courses in church history. In 2015, he began the Bill Cook Foundation to provide educational opportunities for some of the world’s poorest children.

With Cook devoting himself full-time to its operation, the foundation has raised nearly $1 million while helping children in some 23 countries in Africa, Central America, South America, Asia and Europe. Its good works range from supporting a home for teenage girls who have been trafficked in Guatemala; to sending three Cambodian students to Cook’s alma mater, Wabash College in Indiana (he is an Indianapolis native); to providing a tutor for refugee children in Myanmar who are not allowed to attend public school because they are HIV-positive; to assisting young Romanis who face discrimination, particularly in eastern Europe. Several of the foundation’s projects also include funding for housing, food and other living necessities.

Working with a board of directors as well as an advisory board, Cook scouts out worthy projects for his nonprofit foundation and seeks funding for them by appealing to his long list of contacts, many of whom are SUNY Geneseo alumni.

“I like juggling balls and seeing if I can get them arranged in a useful order,” he said. “What I like to do is figure out how to get people together. There’s lots of money available from good-hearted people and lots of things that need to be done.”

Cook, who will turn 75 on Dec. 27, travels all over the world to oversee the start of various initiatives and monitor how they’re progressing, readily offering hugs to the indigent children he meets.

His experiences of recent years bear little resemblance to his teaching tenure at SUNY Geneseo, for which he has received several honors. Yet the seeds for his current ministry were actually sown long ago: When Cook was 8, he was deeply moved by abject poverty he witnessed in the Bowery during a family vacation to New York City.

“That sort of got inside me. When I look back at my life, all the way to a kid, this is a vocation that’s been emerging over many, many years,” Cook said. “But the pieces were very fragmentary.”

Cook, who has never married, adopted three boys between 1982 and 1987; he also has served as guardian for eight others. He formed a lasting bond with another youth beginning in 1992, when he gave food to a 12-year-old boy who was begging at a restaurant. Today that boy, Angel Fararoni, has three sons of his own and his family receives help from the Bill Cook Foundation. Cook also remains in touch with the Romani boy he befriended in Italy.

Cook has lived in New York state since earning master’s and doctorate degrees in medieval history from Cornell University in the early 1970s. Welcomed into the Roman Catholic Church in 1975, he is a member of St. Luke the Evangelist Parish and closely connected with SUNY Geneseo’s Newman Community as well.

A resident of the Village of Geneseo, Cook spends more than half of the year traveling for his foundation. He hopes that more people will consider devoting time to making the world a better place, saying that any effort large or small should be considered worthwhile.

“Despite all the tragedies of the world, we all have in us the opportunity to do something really good that matters,” he stated.

EDITOR’S NOTE: To donate to the Bill Cook Foundation, or learn more about it, visit www.billcookfoundation.org.

Tags: Faith in Action, Livingston County News, Newman Community
Copyright © 2023 Rochester Catholic Press Association, Inc. All rights reserved. Linking is encouraged, but republishing or redistributing, including by framing or similar means, without the publisher's prior written permission is prohibited.