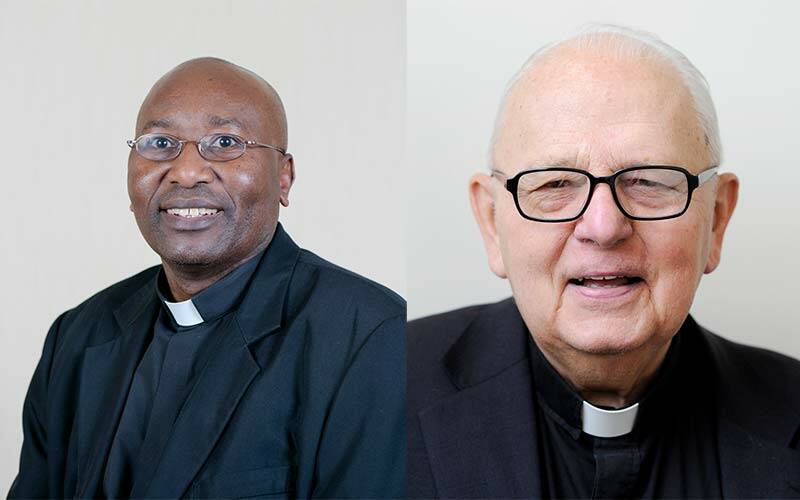 ROCHESTER — The new director of the diocesan missions office notes he would not be a priest today but for the efforts of missionaries.

On July 1, Father Paul Gitau, a native of Kenya, began a five-year term as diocesan director of the Society for the Propagation of the Faith. Bishop Salvatore R. Matano appointed him to the role concurrent with his pastorate at Webster’s St. Paul Parish.

Father Gitau assumed the role from Father Robert Bradler who for the past 40 years coordinated diocesan support of missionary activity.

Catechised by missionaries in Kenya, Father Gitau said his primary mentor, Irish Father Patrick O’Toole CSSp, committed to supporting him “morally and financially” as he pursued the priesthood.

A fruit of missionaries

Father Gitau was ordained in 1994 for the Archdiocese of Nairobi, Kenya. Later, Basilian priests in Rochester provided further support in the form of full scholarships for graduate studies at St. John Fisher College. All this support was crucial, he said, since his family could not have afforded to send him to seminary.

“If not for the missionaries, I would not be a priest. I can say that I am fruits of the missions,” said Father Gitau, who arrived in the Diocese of Rochester in 2003 and was incardinated as a diocesan priest in 2012.

Father Gitau acknowledged that his experience of missionary support gives him a unique awareness in his new diocesan role — a point on which his predecessor agrees.

“I would say it’s a good appointment, someone who is a product of missionaries,” Father Bradler remarked.

‘Did I help the poor?

“It’s been a wonderful 40 years,” Father Bradler said, remarking that Propagation of the Faith has given him “the opportunity to reach beyond the confines of the Diocese of Rochester to touch the whole world. I’ve met very wonderful, beautiful people. Some of them have become close friends of mine.”

Although he stepped down from the role due to recent health concerns, Father Bradler, 87, said he and Father Gitau are working together to help ease the transition.

In a statement, Bishop Matano expressed his gratitude to Father Bradler, noting that the longtime director oversaw moving the missions office from East Avenue to the diocesan Pastoral Center in Gates, and expanded contact with many religious orders and mission organizations.

Father Bradler said his dedication to Propagation of the Faith was fueled by Christ’s frequent edicts to aid the less fortunate.

“When I enter the gates of heaven, I know that’s the question I”m going to be asked: Did I help the poor, did I reach out to people?” he said.

The Society for the Propagation of the Faith is part of the international Catholic Pontifical Mission Society, which supports missionary work in developing nations.

In the Rochester Diocese, efforts include arranging educational and fundraising appearances at parishes by visiting missionaries; overseeing annual collections on Diocesan Mission Sunday (every third Sunday in May) and World Mission Sunday (every second-to-last Sunday in October); and encouraging prayer and donations, such as bequests, at other times of the year.

Father Gitau said the Propagation of the Faith — which is celebrating its 200th year worldwide in 2022 — strives to support efforts “proclaiming the good news of the Gospel in every corner of the world.”

He cited Matthew 28:19-20, which states, “Go, therefore, and make disciples of all nations, baptizing them in the name of the Father, and of the Son, and of the Holy Spirit, teaching them to observe all that I have commanded you.”