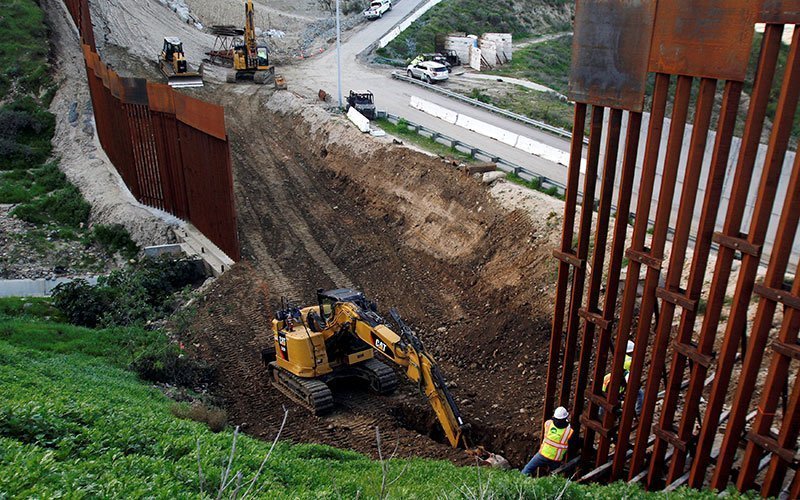 Construction workers in the U.S. work on a new section of the border wall as seen from Tijuana, Mexico, Feb.18, 2019. The U.S. Supreme Court in a July 31, 2020, order is allowing border wall construction to proceed amid a legal battle. (CNS photo by Jorge Duenes, Reuters)

WASHINGTON (CNS) — In a 5-4 vote July 31, the Supreme Court gave the go-ahead for construction to continue on portions of the Trump administration’s border wall with Mexico by declining to take up requests from environmental groups to stop the work.

The brief order was unsigned.

Justice Stephen Breyer wrote a short dissent, joined by Justices Ruth Bader Ginsburg, Sonia Sotomayor and Elena Kagan that said the government would not be harmed by the request to halt construction and that the court’s decision “may operate, in effect, as a final judgment.”

In June, a panel of the 9th Circuit ruled that Trump’s transfer last year of $2.5 billion in military funds to pay for border wall construction was an illegal overreach of executive authority.

The Supreme Court justices declined to lift a stay imposed a year ago, in another 5-4 vote, that allowed the federal government to continue to spend federal funds on construction of the border wall while the legal challenge to using military funds for the wall continued.

Challengers had asked the court this year to intervene, saying if the stay wasn’t lifted, the Trump administration could finish the wall before the court even had the chance to rule on some of its funding.

Earlier last year, U.S. Catholic bishops voiced opposition to the president’s declaration of a national emergency in order to free up additional funding to construct a barrier along parts of the border.

Cardinal Daniel N. DiNardo of Galveston-Houston, then president of the U.S. Conference of Catholic Bishops, and Bishop Joe S. Vasquez of Austin, Texas, then chairman of the USCCB Committee on Migration, said they were “deeply concerned about the president’s action to fund the construction of a wall along the U.S.-Mexico border, which circumvents the clear intent of Congress to limit funding of a wall.”

“We oppose the use of these funds to further the construction of the wall,” Cardinal DiNardo and Bishop Vasquez said. “We remain steadfast and resolute in the vision articulated by Pope Francis that at this time we need to be building bridges and not walls.”

In another statement, the border bishops and the other prelates who joined them said that while they agree with the president that there is a “humanitarian challenge” at the border, “erecting a wall will not solve the problem,” they said, and they asked Congress to step in with more humanitarian responses.

The southern border wall has been a major part of Trump’s platform since the start of his 2016 election campaign when he promised that Mexico would pay for the wall.

The groups challenging the wall’s funding have said they will continue their battle.

In a statement issued after the court’s July 31 decision, Dror Ladin, staff attorney with the ACLU’s National Security Project, said: “The fight continues. Every lower court to consider the question has ruled President Trump’s border wall illegal and the Supreme Court’s temporary order does not decide the case.

“We’ll be back before the Supreme Court,” he said, adding that the “Trump administration has admitted that the wall can be taken down if we ultimately prevail, and we will hold them to their word and seek the removal of every mile of unlawful wall built.”