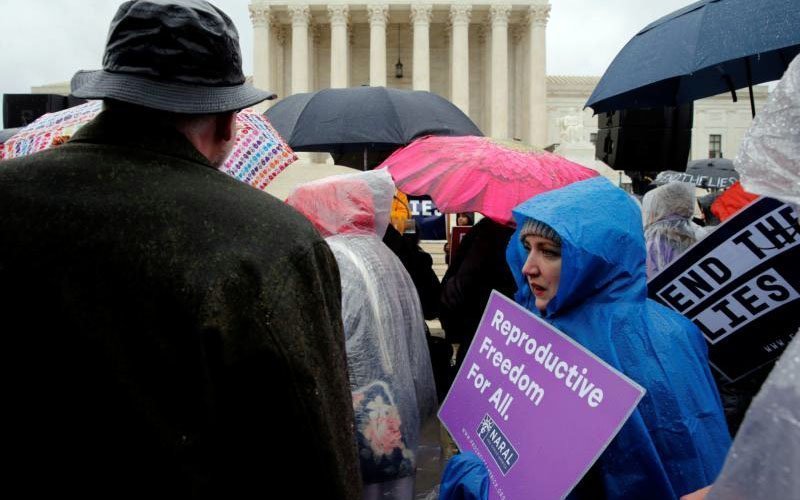 Pro-life advocates and a counter-demonstrator gather March 20 outside the U.S. Supreme Court in Washington as the court hears oral arguments in NIFLA v. Becerra, a case about freedom of speech at crisis pregnancy centers. (CNS photo by Jonathan Ernst/Reuters)

WASHINGTON (CNS) — In oral arguments before the Supreme Court March 20, justices seemed skeptical about a California law that requires pro-life pregnancy centers in the state to visibly display information about abortions to their clients that the centers say violates their right to free speech.

A few of the justices asked about the state’s motivation to put the law in place, wondering if it was more about educating women about state-provided services or if it was meant to specifically target centers offering pregnancy-related services that clients might assume are medical facilities.

Justice Elena Kagan said it would be a problem and a First Amendment issue if the law was “gerrymandered” to only apply to certain types of service providers.

The law’s requirement that licensed and unlicensed centers disclose their status in advertisements in large type and in many languages was seen as an “undue burden” by Justice Anthony Kennedy, who asked if this would apply — and was told it would — to an unlicensed facility that wanted to have a “choose life” or “pro-life” billboard. Justice Sonia Sotomayor agreed that aspect of the law, in some cases, was “burdensome and wrong.”

The case is the first abortion-related one to be heard by the court with President Donald Trump’s appointee, Neil Gorsuch, on the bench. The oral arguments drew people from both sides outside the court in the freezing rain on the first day of spring. Some signs, held aloft in between umbrellas, said “Patients want care not coercion” and “Give free speech life.”

After the hourlong argument, Thomas Glessner, president of the National Institute of Family and Life Advocates, the group representing the pregnancy centers, told the crowd outside that he felt “very optimistic” about the outcome of this case.

California’s attorney general, Xavier Becerra, tweeted right after the arguments: “Information is power and all women should know the full range of their #healthcare options! A great morning with my team at #SCOTUS.”

In a March 20 statement, Cardinal Timothy M. Dolan of New York said he prayed the court would “do the right thing and uphold our fundamental right to free speech when it decides this case.”

“Pro-life pregnancy care centers embody everything that is right and good in our nation: generosity, compassion and love that is offered to support both mother and child,” said Cardinal Dolan, chair of the U.S. Conference of Catholic Bishops’ Committee on Pro-Life Activities.

He noted that some government officials, instead of “applauding and encouraging the selfless and life-affirming work of these centers” want to “force them to provide free advertising for the violent act of abortion in direct violation of their pro-life convictions and the First Amendment.”

The case, National Institute of Family and Life Advocates (NIFLA) v. Becerra, is about the constitutionality of the Reproductive FACT Act, a state law which says pregnancy centers must post notices in their facilities about available low-cost abortion services and also must disclose if they have medical personnel on staff. The Christian-base centers provide counseling and often offer supplies of diapers, formula, clothes and baby items. Centers that failed to comply with the law have been subject to fines of $500 for a first offense and $1,000 for subsequent offenses.

Three pregnancy centers challenged the law in court saying it infringed on their First Amendment rights to freedom of speech and free exercise of religion.

The law was upheld last October by a panel of the U.S. Court of Appeals for the 9th Circuit that said the state could regulate professional speech because of its interest in safeguarding public health and to ensure that “citizens have access to and adequate information about constitutionally protected medical services like abortion.”

Last October, a California Superior Court judge granted a permanent injunction against the state attorney general preventing him from enforcing the FACT law.

Justice Stephen Breyer said during the oral arguments that if abortion providers must tell pregnant women about other options, then pregnancy centers should similarly tell their clients about outside services. “In law, as you well know, what is sauce for the goose is sauce for the gander,” which he explained as coming down to this: “If a pro-life state can tell a doctor you have to tell people about adoption, why can’t a pro-choice state tell a doctor, a facility, whatever it is, you have to tell people about abortion?”

The USCCB and several other groups including the California Catholic Conference, the Catholic Health Association of the United States, in friend-of-the-court briefs with the Supreme Court supporting the pro-life pregnancy centers, stressed that the government can’t force people to say things they don’t believe.