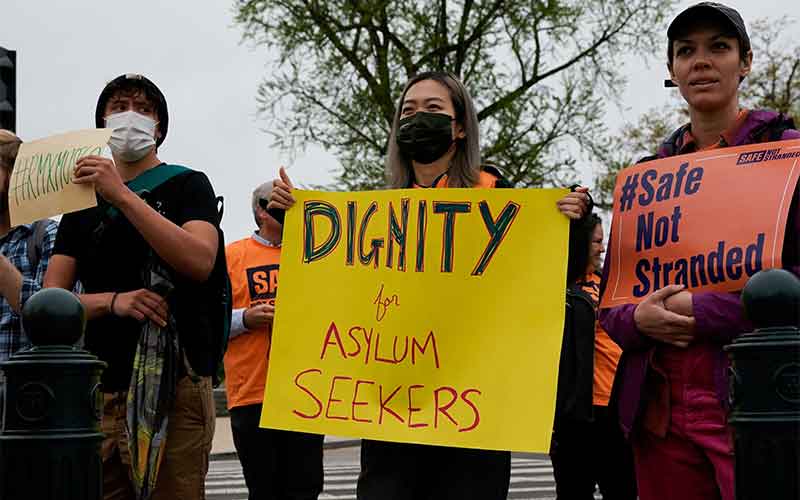 People in support of asylum seekers rally near the Supreme Court in Washington April 26, 2022, as the court hears oral arguments in President Joe Biden's bid to rescind a Trump-era immigration policy that forced migrants to stay in Mexico to await U.S. hearings on their asylum claims. (CNS photo by Elizabeth Frantz/Reuters)

The policy in question is the Migrant Protection Protocols, or MPP, which requires asylum-seekers to stay in Mexico until their cases can be heard in U.S. immigration courts.

Immigration supporters, including many Catholic organizations, have spoken out against this policy. And during oral arguments, activists held a rally outside the Supreme Court holding signs with the message “safe not stranded.”

The policy, put in place in 2019, has been a headache for the Biden administration. Once President Joe Biden took office in 2021, he paused the policy, then formally sought to end it a few months later in June.

But in August of that year, after Texas and Missouri sued to maintain the program, a judge with the U.S. District Court for the Northern District of Texas told administration officials that they had to continue complying with the policy, saying they had not ended it properly.

Last December, a federal judge reinstated the program with some changes made by the Biden administration, including a pledge to resolve cases within six months and to pay for migrants’ transportation to and from hearings.

The question now before the nation’s high court is whether immigration officials must send asylum-seekers to Mexico or if they can allow them into the United States while they await their hearings.

Some of the justices questioned the administration’s ability to release immigrants into the United States, but they also questioned how Texas courts can determine public policy.

Solicitor General Elizabeth Prelogar said the law does not contain a provision requiring migrants to be returned to Mexico, and she also pointed out that there is a “public benefit” to allowing migrants who pass criminal background and other checks into the U.S., freeing the detention beds for those who are more dangerous.

She also said it was impossible on a practical level to detain all migrants at the U.S.-Mexico border since there are less than 40,000 immigration detention beds.

Chief Justice John Roberts said that although the government can’t possibly detain all who cross the border, he wondered if releasing large numbers of them into the U.S. was in compliance with federal law.

Since reinstating the immigration rule, the Biden administration has enrolled 3,012 migrants in the Remain in Mexico program, primarily asylum-seekers from Cuba, Nicaragua and Venezuela.

Texas Solicitor General Judd Stone stressed that federal law requires U.S. border officials to either detain or return migrants to Mexico and said that if the U.S. has reached capacity limit to detain migrants, immigration officials should be returning them to Mexico where they can await their asylum hearings.

But those being forced to wait in Mexico have said they have been in dangerous situations and have found it hard to find lawyers to handle their cases.

“The legal rights, safety and humanity of thousands of men, women and children have been ignored as they have been forced to wait in life-threatening conditions in Mexico due to MPP,” said Anna Gallagher, executive director of Catholic Legal Immigration Network, known as CLINIC.

“We pray that the Supreme Court will recognize that MPP is both illegal and immoral so that the Biden administration can put an end to the shameful program once and for all,” she said in an April 26 statement.

CLINIC filed an amicus brief in this case urging the Supreme Court to reverse the lower court ruling brought by Texas and Missouri, which ordered the government to reinstate the policy.

Joan Rosenhauer, executive director of Jesuit Refugee Service/USA had a similar take. “For over three years, MPP has forced thousands of asylum-seekers to wait for their asylum hearings in dangerous border towns, subjecting them to systemic danger and violence,” she said in a statement, adding that her organization “works directly with people in northern Mexico as they await their opportunity to pursue asylum and find safety in the U.S. We hear every day of the violence and suffering they experience.”

“We are deeply dismayed by the reimplementation of MPP,” he said. “Unfortunately, attempts by the administration to make this program ‘more humane’ — however well-intentioned –will not cure its inherent faults, nor will they alleviate its inevitable toll on human lives.”

A decision in this case, Biden v. Texas, is expected by late June.

Contributing to this report was Rhina Guidos in Washington.