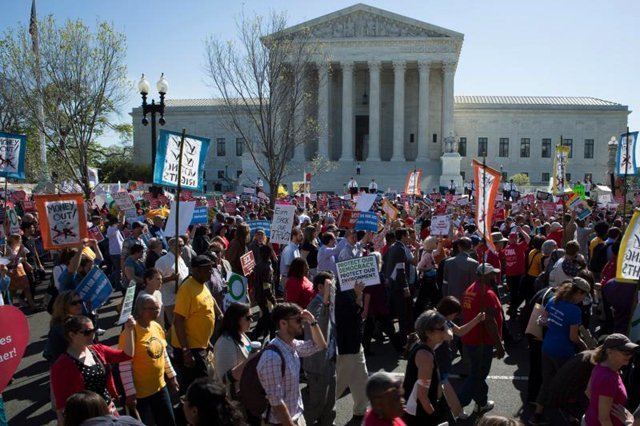 Demonstrators gather outside the U.S. Supreme Court in Washington April 18 as the justices hear oral arguments in a challenge by several states to President Barack Obama's deferred deportation programs.

WASHINGTON (CNS) — All eyes are once again on what seems to be an evenly divided Supreme Court, which heard oral arguments April 18 in a major case impacting a U.S. immigration policy.

After the 90 minutes of oral arguments in United States v. Texas, the eight Supreme Court justices must now determine if the U.S. president can temporarily protect undocumented parents of American citizens from deportation and give them temporary work permits.

The program had been put on hold last November by the 5th U.S. Circuit Court of Appeals in New Orleans, upholding a Texas-based federal judge’s injunction against Obama’s actions.

Twenty-six states, including Texas, are suing the federal government in the case, saying the president went too far with his actions. Texas Solicitor General Scott Keller said the president was not just putting a temporary block on deportations, but giving undocumented immigrants a "lawful presence" in this country that would enable them to qualify for benefits such as Social Security and Medicare.

The justices spent a lot of time focused on the phrase "lawful presence," and Chief Justice John Roberts in particular quizzed U.S. Solicitor General Donald B. Verrilli Jr. about it before noting that being lawfully present, having a license and a job did not necessarily mean someone was legally present in the United States.
Verrilli pointed out that the primary issue at stake was the "pressing human concern" to avoid breaking up families of U.S. citizen children.
Someone who knows that firsthand was seated in the court listening to the arguments. Six-year-old Sophie Cruz, from Los Angeles, might not have been able to explain the legalese used by the attorneys and justices, but she did know that her parents could face deportation if Obama’s plan to block deportations was lifted.
Sophie brought her concern to Pope Francis on his visit to the United States last September, crossing a security line to give the pope a note begging that her parents be allowed to stay in this country.
The plight of such families also was supported by many who gathered in front of the Supreme Court long before the oral arguments began. They carried placards saying: "Fight for families," and "Love your neighbor" while a mariachi band played alongside them.
In early March the U.S. Conference of Catholic Bishops and several other Catholic organizations joined in filing friend of the court briefs urging the
Supreme Court to support the Obama administration’s actions that would temporarily protect from deportation more than 4 million immigrants in the country illegally and enable some immigrants to legally work in the United States.
Justice Anthony Kennedy wondered if the president can defer deportations for millions of people without specific congressional authorization, calling it a "legislative task, not an executive task."
"It’s as if the president is defining the policy and the Congress is executing it," he added, noting: "That’s just upside down."
A key issue in the arguments was not just immigration but whether the states had the legal standing to challenge the president’s executive actions.
Part of the concern voiced by Texas officials is over the issuing of driver’s licenses to undocumented immigrants, which Keller noted was an issue for the state because of the cost.
Justice Sonia Sotomayor said she understands frustrations with obtaining licenses because there are often long lines and it’s not an ideal situation, but she seemed to indicate that this was surmountable.
She stressed that the 4 million immigrants who might be given a temporary reprieve from deportation "are living in the shadows" and "are here whether we want them or not," adding that the government had limited resources available for deportations.
Thomas Saenz, a lawyer representing three undocumented mothers of U.S. citizen children, told the court his clients live in "daily fear that they will be separated from their families and detained or removed from their homes."

More than 325 immigration groups, civil rights, labor and social service organizations have filed amicus briefs to urge the high court to uphold the Obama administration’s executive actions. In addition to the USCCB, other Catholic groups filing briefs included the Catholic Legal Immigration Network Inc., or CLINIC, and at least three Catholic colleges, which joined in a brief with more than 75 education and children’s advocacy organizations.

Other briefs were filed by House Democrats and a group of more than 60 entrepreneurs and business leaders including Facebook founder Mark Zuckerberg.
The court is expected to rule on the case in June. If the decision is a 4-4 split, it would leave in place the appeals court ruling blocking the Obama administration’s plan.
– – –
Follow Zimmermann on Twitter: @carolmaczim.
Copyright © 2023 Rochester Catholic Press Association, Inc. All rights reserved. Linking is encouraged, but republishing or redistributing, including by framing or similar means, without the publisher's prior written permission is prohibited.