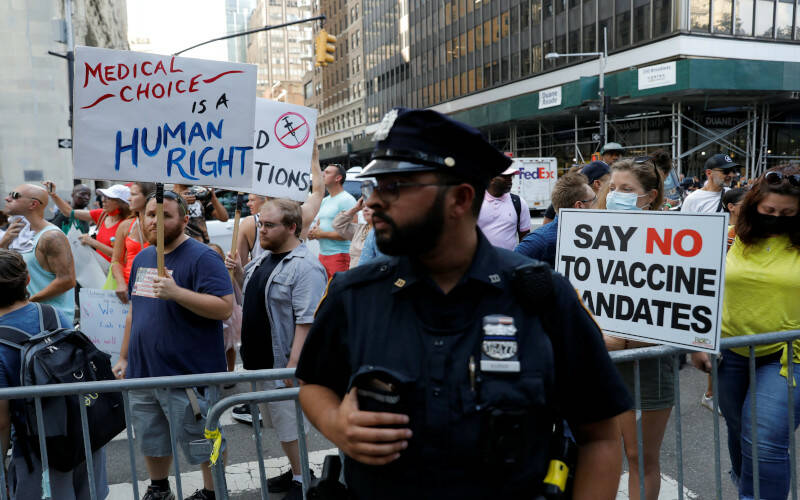 WASHINGTON (CNS) — During two sets of oral arguments Jan. 7, the majority of Supreme Court justices questioned the Biden administration’s requirement that large businesses need their employees to show proof of COVID-19 vaccination or be tested while they were less dubious about the requirement that most health-care workers be vaccinated.

In the emergency hearings, which lasted three and a half hours, the court considered emergency petitions to stop these requirements, even temporarily, or to allow them to proceed while lawsuits challenging them continued.

The employee challenge was over a vaccination or testing regulation issued by the Occupational Safety and Health Administration for employers with 100 or more workers.

The health-care worker challenge examined rules issued by the Centers for Medicare and Medicaid Services requiring COVID-19 vaccinations for all employees at hospitals, nursing homes and other health-care providers that receive federal funds.

At the start of the hearings, which focused on large businesses, Justice Sonia Sotomayor, Elena Kagan and Stephen Breyer described the Biden administration’s requirements as an urgent response to a health-care crisis that continues to worsen.

The other six justices indicated that the administration could be overstepping its authority here.

“This is something the federal government has never done before,” Chief Justice John Roberts said about the administration’s claim that the Occupational Safety and Health Act of 1970 gave it wide-reaching authority.

Roberts and Justice Neil Gorsuch said decisions regarding employers’ pandemic responses and employee requirements should come from states or Congress, not a federal agency.

During the pandemic, the Supreme Court has repeatedly upheld state vaccine mandates, but the case before them about large businesses is broader.

And the mandate for health-care workers is somewhat different because courts have ruled that the federal government can put conditions on programs like Medicare or Medicaid that get federal funding.

The pandemic’s impact, even on these hearings, could not be ignored. For example, the court continues to remain closed to the public and Sotomayor participated remotely.

Two attorneys, representing Ohio and Louisiana, argued before the court by phone after recently testing positive for COVID-19.

Scott Keller, a lawyer representing the National Federation of Independent Business, was asked more than once if he was seeking a stay on the government rule, which he said he was. He asked the court for a decision by Jan. 11 when the first phase of the ruling was scheduled to take place.

Keller argued that the federal government’s policy would cause many employees to quit their jobs.

In the first part of the arguments, Kagan pointed out that “nearly a million people have died” in the United States due to the coronavirus pandemic, which she said was “by far the greatest public health danger that this country has faced in the last century.”

Regarding the policy for health-care workers, she said the government is saying: “Basically, the one thing you can’t do is to kill your patients, so you have to get vaccinated.”