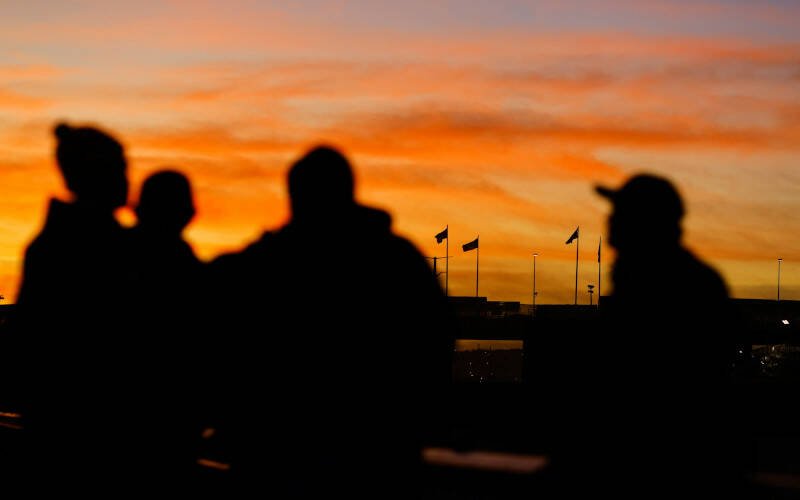 A view of the Paso del Norte International Bridge crossing between Mexico and the U.S. is seen as Venezuelan migrants stand in Ciudad JuᲥz, Mexico, on the edge of the Rio Grande Dec. 27. (CNS photo by Jose Luis Gonzalez/Reuters)

WASHINGTON (CNS) — In an end-of-the year decision, the Supreme Court said Dec. 27 that a federal public health rule that allows immigration officials at the border to quickly turn away migrants seeking asylum could stay in place while legal challenges to the policy played out.

In a 5-4 decision, the justices stopped a trial judge’s ruling that would have lifted the measure, known as Title 42 of the Public Health Services Act, on Dec. 21.

Chief Justice John Roberts had already put that order on pause Dec. 19 responding to an emergency request filed by 19 states asking the justices to keep Title 42 in place.

The Trump administration used the public health measure during the pandemic to allow U.S. border officials to expel migrants quickly without giving them an opportunity to seek asylum in the United States.

“Our hearts (are) broken by this decision and the many people that will be further harmed because of it,” tweeted the Interfaith Immigration Coalition Dec. 27.

They said that as people of faith, they were calling on President Joe Biden to “do everything in his power to welcome people seeking safety with the compassion they deserve.”

The justices agreed to hear arguments about enforcement of Title 42 at the border in February. In their brief unsigned order, they said the rule will remain in place for now and they will only consider whether the states challenging it have the legal right to do so.

In a dissent, Justice Neil Gorsuch, joined by Justice Ketanji Brown Jackson, emphasized that the Biden administration and Congress have failed to adequately address the immigration crisis and also said the nation’s high court is not meant to issue policies.

He said he did not discount concerns raised by the state attorneys general and also acknowledged that lifting Title 42 “will likely have disruptive consequences,” but he said the reason it was enforced, as a public health measure, is no longer valid.

“The current border crisis is not a COVID crisis,” he wrote, adding that the courts “should not be in the business of perpetuating administrative edicts designed for one emergency only because elected officials have failed to address a different emergency. We are a court of law, not policymakers of last resort.”

Justices Sonia Sotomayor and Elena Kagan indicated they would have allowed the federal judge’s ruling ending Title 42 to stand, but they did not join the dissent.

Title 42 gives the Centers for Disease Control and Prevention the power to bar the entry of individuals into the United States to protect the public from contagious diseases.

The Biden administration initially extended the policy used by the Trump administration but in April it announced that it would end it, saying it was no longer necessary to protect public health.

A federal judge in Louisiana said the administration had not followed proper procedures in trying end Title 42 and ordered that it stay in place. The administration has appealed that decision to the U.S. Court of Appeals for the 5th Circuit, where it remains pending.

In a separate case, a federal judge in Washington ruled that the policy itself was illegal and ordered the government to end it, which was challenged by 19 states with Republican attorneys general.

After the U.S. Court of Appeals for the District of Columbia Circuit rejected the states’ request to join the case, the states came to the Supreme Court urging the curt to keep the policy in place and saying that lifting it would “cause a crisis of unprecedented proportions at the border.”

Migrant families challenging the policy say the states’ support for Title 42 is not based on pandemic concerns. They also said the policy has had a devastating impact on those forced to return to “cartels and others ready to abduct and exploit them.”

Texas border cities, like El Paso, had been preparing for the surge of new migrants as the pandemic-era rule was scheduled to end.

In mid-December, Dylan Corbett, director of the Hope Border Institute, a Catholic organization helping migrants, said constant changing policies make it hard for organizations such as his to plan.

“You have a lot of pent-up pain,” he told The Associated Press, noting that with government border policies in disarray, “the majority of the work falls to faith communities to pick up the pieces and deal with the consequences.”

In October, Bishop Seitz issued a statement expressing his disappointment that Title 42 had been expanded to Venezuelans seeking to cross the border.

“Now we must all work harder, especially the faith community, to build a culture of hospitality that respects the dignity of those who migrate, and to continue to press lawmakers and the Biden administration to establish a safe, humane, functioning and rights-respecting system to ensure protection to those in need,” he said.