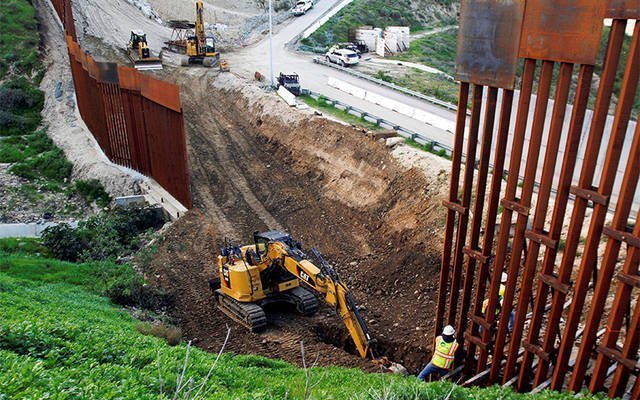 Construction workers in the U.S. work on a new section of the border wall as seen from Tijuana, Mexico, Feb. 18. The Supreme Court ruled July 26 that the Trump administration could use Pentagon funds to pay for construction and repairs of a wall along the border. (CNS photo by Jorge Duenes/Reuters)

WASHINGTON (CNS) — In a 5-4 vote July 26, the Supreme Court said the Trump administration could use $2.5 billion in Pentagon funds to pay for construction and repairs of a wall along the U.S-Mexico border.

The order — one paragraph long and unsigned — overturns an appellate court decision that froze the funds for border wall work involving building and replacing fencing and other projects in California, New Mexico and Arizona.

In lifting the freeze on these border wall funds from the Defense Department, the justices said those who initially challenged the use of Pentagon funding for the border wall — Sierra Club and Southern Border Communities Coalition— didn’t have the legal right to challenge the money’s allocation.

The order, announced during the court’s summer recess, was in response to an emergency filing by the Trump administration. The administration had asked for a quick decision, saying if it didn’t finalize contracts for these projects by the end of September, it would lose the ability to use the funds.

Earlier this year, Catholic bishops voiced their opposition to President Donald Trump’s declaration of a national emergency in order to construct a barrier along parts of the border.

Cardinal Daniel N. DiNardo of Galveston-Houston, president of the U.S. Conference of Catholic Bishops, and Bishop Joe S. Vasquez of Austin, Texas, chairman of the USCCB Committee on Migration, said they were “deeply concerned about the president’s action to fund the construction of a wall along the U.S.-Mexico border, which circumvents the clear intent of Congress to limit funding of a wall.”

“We oppose the use of these funds to further the construction of the wall,” Cardinal DiNardo and Bishop Vasquez said. “We remain steadfast and resolute in the vision articulated by Pope Francis that at this time we need to be building bridges and not walls.”

In another statement, the border bishops and the other prelates who joined them said that while they agree with the president that there is a “humanitarian challenge” at the border, “erecting a wall will not solve the problem,” they said, and they asked Congress to step in with more humanitarian responses.