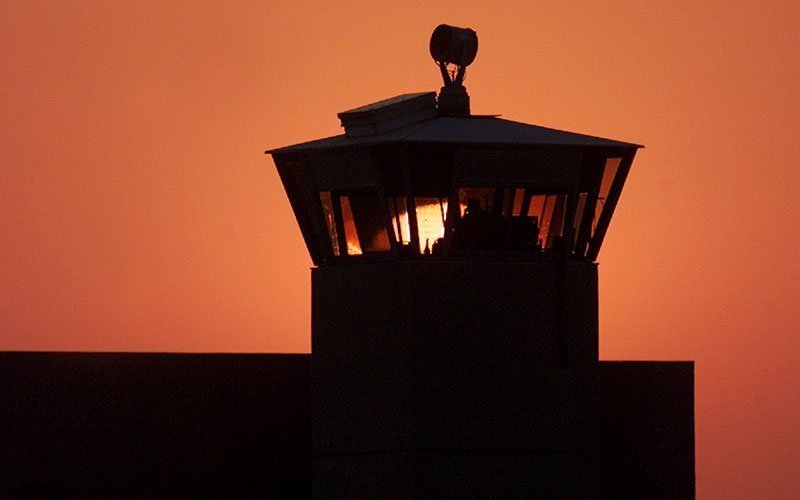 The sun sets behind one of the guard towers at the Federal Correctional Complex in Terre Haute, Ind., June 10, 2001. (CNS photo by Andy Clark, Reuters)

WASHINGTON (CNS) — After the Supreme Court cleared the way for the second federal execution in a week, 68-year-old Wesley Purkey was killed by lethal injection at the penitentiary in Terre Haute, Indiana, July 16.

The court’s 5-4 unsigned order overturned a lower court ruling that had temporarily blocked the execution over claims the inmate was not mentally competent and would not comprehend the reason for his punishment, thus making it unconstitutional.

After Purkey’s execution, the Catholic Mobilizing Network, the national Catholic organization working to end the death penalty and promote restorative justice, tweeted: “God rest his soul. This is the second federal execution this week after a 17-year hiatus. May God guide us as we grapple with this egregious violation of justice that dishonors all life.”

The group had tweeted the previous night they “hold in prayer” Purkey’s victims. He also had received a life sentence in a state court for bludgeoning an 80-year-old woman to death.

Sister Helen Prejean, a Sister of St. Joseph of Medaille, who is a longtime anti-death penalty activist, tweeted: “Victims’ families are not served by these federal executions. They’re told to just wait a few decades and then they’ll finally get ‘justice.’ The truth, as explained by many families, is that an execution changes almost nothing. It actually devalues the life of their loved one.”

Last year, the Justice Department announced it was resuming federal executions that had been put on hold for the past 17 years. The first of these was the July 14 execution of Daniel Lewis Lee. His case also had last-minute filings to delay the execution but was given the go-ahead that day by an early morning 5-4 Supreme Court decision.

The court’s decision on Purkey’s execution gave no explanation for it, but dissenting justices made their views clear, as they did in the Lee decision days before.

Justice Stephen Breyer, who has previously questioned the country’s death penalty practice and did so in the previous federal execution case, July 14, wrote a dissent July 16, joined by Justice Ruth Bader Ginsburg. “A modern system of criminal justice must be reasonably accurate, fair, humane and timely,” he wrote, adding: “Our recent experience with the federal government’s resumption of executions adds to the mounting body of evidence that the death penalty cannot be reconciled with those values.”

Justice Sonia Sotomayor also wrote a dissent, joined by Ginsburg and Justice Elena Kagan, which noted the lower court’s ruling that the evidence Purkey’s attorneys had given about their client’s mental state gave sufficient reason for a competency hearing before his scheduled execution.

“Proceeding with Purkey’s execution now, despite the grave questions and factual findings regarding his mental competency, casts a shroud of constitutional doubt over the most irrevocable of injuries,” Sotomayor wrote.

In a separate July 16 order, issued without comment or dissent, the Supreme Court rejected arguments from spiritual advisers to Purkey and Dustin Lee Honken, an inmate scheduled for execution July 17, that the executions be postponed because of coronavirus concerns.

A Buddhist cleric was an adviser for Purkey, and Benedictine Father Mark O’Keefe is the adviser for Honken, a meth trafficker who received the death penalty for the 1993 execution-style slayings of two sisters, ages 10 and 6. He received three life sentences for killing their mother, her boyfriend and a drug-dealing associate.

Father O’Keefe, a moral theology professor at St. Meinrad Seminary in St. Meinrad, Indiana, said in his appeal for a postponed execution: “Honken has been a sincere, practicing Catholic for more than 10 years. He attends Catholic Mass and receives Communion regularly; he receives Catholic ministry regularly; and he believes sincerely in the Catholic faith.”