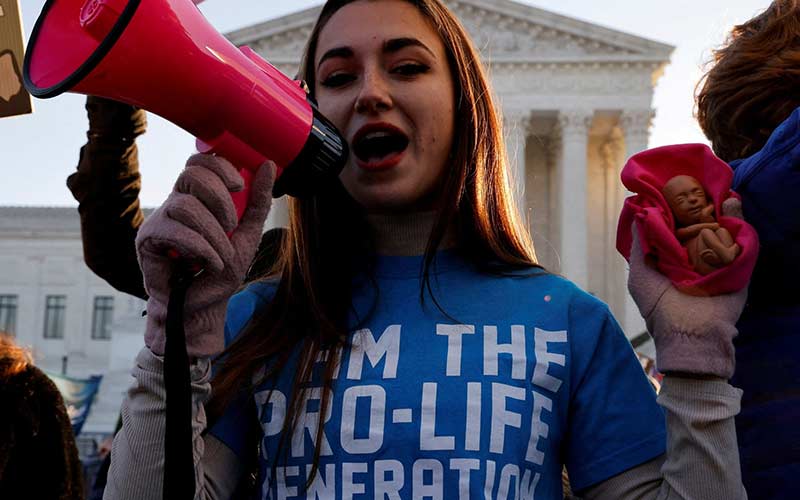 A pro-life demonstrator is seen in front of the U.S. Supreme Court in Washington Dec. 1, 2021. (CNS photo by Jonathan Ernst/Reuters)

WASHINGTON (CNS) — The Supreme Court Jan. 20 rejected a request from Texas abortion providers to immediately send their challenge of the state’s abortion law to a federal District Court, where a judge had previously blocked the law.

The high court’s action — in its one-sentence order — means the state law that bans most abortions after six-weeks of pregnancy will remain in effect.

The Supreme Court’s refusal to grant the providers’ request was not unanimous. Justices Stephen Breyer, Sonia Sotomayor and Elena Kagan said they would have granted the request.

Sotomayor, in a seven-page dissent, joined by Breyer and Kagan, said the court’s action in this case meant it “accepts yet another dilatory tactic by Texas.” She also said the federal District Court “will remain powerless” to address the state law’s “unconstitutional chill on abortion care, likely for months to come” and added that she could not look the other way while, she said, her colleagues on the bench did.

Texas Right to Life praised the Supreme Court’s action saying in a Jan. 20 statement that the “lawsuit will continue in the appropriate venue and the Texas Heartbeat Act will continue to save preborn lives.”

While the Supreme Court was considering the appeal from the state’s abortion providers, the challenge to the state’s law that had been before the 5th U.S. Circuit Court of Appeals was sent to the Texas Supreme Court Jan. 17.

The state’s abortion law has been in effect since Sept. 1, 2021, and has faced multiple court battles since then. A major part of the law that has been challenged is its reliance on private citizens to enforce it, encouraging them to sue people suspected of performing or aiding with abortions.

Last December, the U.S. Supreme Court ruled that a portion of the abortion providers’ challenge to the law, against a group of state medical licensing officials, could go forward but the court left the law in place while the legal battle over it continued.

The 2-1 decision issued by the federal appeals court in mid-January said the state should examine if the Texas attorney general, the state’s medical board and other licensing officials can take action to enforce violations of the abortion law.

When the Supreme Court first ruled against blocking the Texas abortion law last September, the Texas Catholic Conference, the public policy arm of the state’s Catholic bishops, said this was the first time since Roe v. Wade that the nation’s high court “has allowed a pro-life law to remain while litigation proceeds in lower courts.”

The other major abortion decision which hangs in the balance is the Supreme Court’s pending decision, likely in June, on Mississippi’s ban on most abortions after 15 weeks of pregnancy.

If the court ultimately sides with Mississippi, it would be the first time the court would allow an abortion ban before the point of viability — when a fetus can survive on its own that most consider to be at 24 weeks.

A ruling allowing Mississippi’s law to go forward could lay the groundwork for abortion restrictions in other states.

Texas Right to Life said Jan. 20 that it was eagerly awaiting this ruling which it said “could weaken or overturn Roe v. Wade” and that it hoped the Supreme Court justices “will recognize the grave legal and ethical errors of its 1973 decision.”