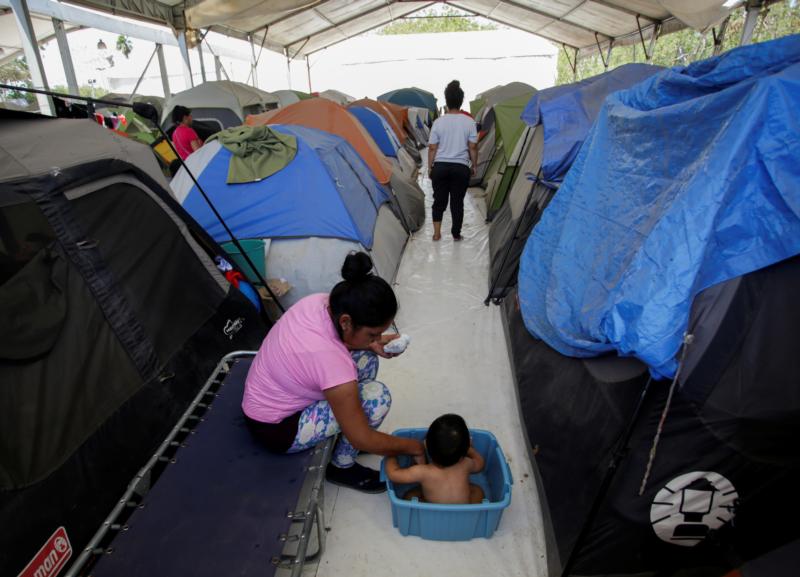 A migrant woman bathes her son outside their tent at a migrant encampment in Matamoros, Mexico, April 30, 2020, where more than 2,000 people live while seeking asylum in the U.S, as the spread of the coronavirus continues. (CNS photo by Daniel Becerril/Reuters)

WASHINGTON (CNS) — In a 7-2 decision June 25, the Supreme Court said the Trump administration can deport some asylum-seekers without granting them a federal court hearing.

The opinion, written by Justice Samuel Alito, said asylum-seekers on track for expedited removal from the U.S. are not entitled to seek habeas corpus — or the right to challenge government detention. The court also ruled that a 1996 law allowing for fast-tracked deportations is constitutional.

The high court reversed a lower court ruling in favor of a Sri Lankan farmer, Vijayakumar Thuraissigiam, who fled his country saying he was persecuted as a member of the country’s Tamil minority and was apprehended just across the U.S.-Mexican border in 2017.

An immigration officer said Thuraissigiam failed to show “credible fear of persecution” if he returned home, so like other asylum-seekers who fail their initial screenings, he was placed on a track for expedited removal, meaning he would not receive the right to an attorney or a hearing before a judge.

Thuraissigiam petitioned a federal court to challenge his deportation.

Writing the majority opinion, Alito said: “Habeas has traditionally been a means to secure release from unlawful detention, but respondent invokes the writ to achieve an entirely different end, namely, to obtain additional administrative review of his asylum claim and ultimately to obtain authorization to stay in this country.”

He also said Thuraissigiam, “does not want ‘simple release’ but, ultimately, the opportunity to remain lawfully in the United States.”

In her dissenting opinion, Sotomayor said Congress had blocked the courts from carrying out a lawful judicial inquiry into asylum claims.

“Today’s decision handcuffs the judiciary’s ability to perform its constitutional duty to safeguard individual liberty and dismantles a critical component of the separation of powers,” she wrote. She also said the court’s action “increases the risk of erroneous immigration decisions that contravene governing statutes and treaties.”

Bradley Jenkins, a federal litigation attorney with Catholic Legal Immigration Network Inc., or CLINIC, said he was disappointed with the court’s decision and said the only lesson in it was that “Congress needs to look at fixing this problem and many other issues if takes up more comprehensive immigration reform.”

He told Catholic News Service the U.S. policy of expedited removal for border crossers does away with a “safety valve for asylum-seekers.” He also said this case, with its call for judicial review of the actions of Congress and the president — in light of the administration’s current asylum limits — had the chance to offer “an important safeguard.”

The law highlighted in this case is the 1996 Illegal Immigration Reform and Immigrant Responsibility Act, which established a system for regulating asylum applications and streamlining the process of removing immigrants said to have claims without merit.

Since 2004, immigration officials have specifically targeted for expedited removal immigrants without legal documentation who were apprehended within 100 miles of the U.S. border and within 14 days of entering the country.