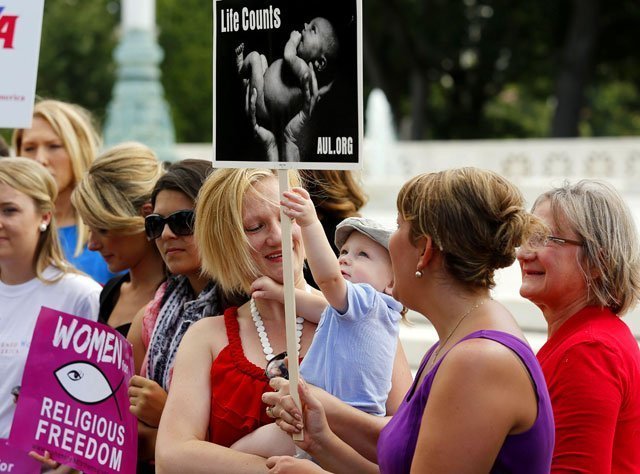 The decision, a victory for pro-life groups, reversed an appellate court decision upholding a 2007 Massachusetts law that made it a crime for anyone other than clinic workers to stand within the yellow semicircular lines painted 35 feet from entrances of Planned Parenthood clinics in Boston, Springfield and Worcester.

Eleanor McCullen, lead plaintiff in the case, McCullen v. Coakley, said she should be able to speak and offer advice to women going to these clinics. McCullen, a 77-year-old who attends Mass at St. Ignatius Church at Boston College said when the case was brought to the Supreme Court that she had helped many women decide against abortion.

The Supreme Court, in its opinion written by Chief Justice John Roberts, said the state law blocked public sidewalks that have been traditionally viewed as open for free speech. It also said the government’s ability to limit speech in those places is "very limited."

The law in question was put in place in an attempt to prevent violent demonstrations or protests outside clinic entrances. It replaced a 2000 state law that kept protesters from approaching within 6 feet of a person who was within 18 feet of an abortion clinic — similar to a 2000 law in Colorado that the Supreme Court upheld that year.

The Supreme Court’s opinion distinguished protesters from those who "seek not merely to express their opposition to abortion, but to engage in personal, caring, consensual conversations with women about various alternatives."

In a concurrence with the main opinion, Justice Antonin Scalia discusses what he sees as the court’s "onward march of abortion-speech-only jurisprudence." His concurrence was joined by Justices Anthony Kennedy and Clarence Thomas.

He observed that the court’s majority opinion "carries forward this court’s practice of giving abortion-rights advocates a pass when it comes to suppressing the free-speech rights of their opponents."

He said that the opinion "has something for everyone," by invalidating the law in question because it is inadequately tailored to circumstances, is "certainly attractive to those of us who oppose an abortion-speech edition of the First Amendment."

But the main part of the opinion moves toward creating a version of the First Amendment that applies only to speech about abortion, he said. By concluding that a statute like the one overturned is not content-based and therefore not subject to strict scrutiny under the law, "the court reaches out to decide that question unnecessarily," Scalia wrote.

Scalia cited ways in which he says the main opinion singled out abortion-only speech in reaching its conclusion that the law was unconstitutional. And he concluded that although he agrees with what the court decided, he thinks it unnecessarily addressed the issue of whether the law was sufficiently narrowly tailored.

"The obvious purpose of the challenged portion of the Massachusetts Reproductive Health Care Facilities Act is to ‘protect’ prospective clients of abortion clinics from having to hear abortion-opposing speech on public streets and sidewalks," he said.

"The provision is thus unconstitutional root and branch and cannot be saved, as the majority suggests, by limiting its application to the single facility that has experienced the safety and access problems to which it is quite obviously not addressed," he concluded.

Justice Samuel Alito also had a separate concurrence. In it he faulted the majority for concluding that the Massachusetts law is viewpoint neutral, but he nevertheless agreed that it is unconstitutional because it burdens free speech more than necessary to accommodate state interests.

Contributing to this report was Patricia Zapor.