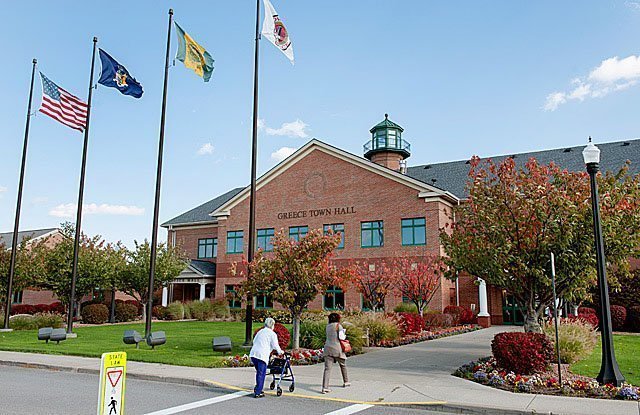 The Greece Town Hall is pictured in a photo from mid-October. The Supreme Court weighed the constitutionality of prayer being said before town council meetings in Greece Nov. 6. The court will issue a ruling on the case before it adjourns in late June.

WASHINGTON (CNS) — In considering a New York town’s practice of opening council sessions with a prayer, the Supreme Court Nov. 6 raised questions about whether the situation is adequately covered by previous rulings allowing legislatures to open with prayers.

The Rochester suburb of Greece was sued by two residents who argued that the town council’s tradition of opening sessions with prayers offered by local clergy violates the Establishment Clause of the First Amendment of the Constitution.

Although the town allows the prayer to be offered in any faith tradition, and has made some effort to include a variety of faiths, the 2nd U.S. Circuit Court of Appeals found the practice unconstitutional. It found that the vast majority of the prayers were specifically Christian, with sectarian references to Jesus and "your son," and that before the lawsuit was filed there was little effort to broaden the type of prayers offered.

In oral arguments in Greece v. Galloway, several Supreme Court justices seemed to be looking for how they might define a way for a municipal body to allow prayers, much as a 1983 ruling in Marsh v. Chambers said the Nebraska Legislature’s opening prayers do not violate the Constitution. The justices proffered hypothetical situations and sought explanations from attorneys on both sides about how the tradition of opening prayers might continue, while ensuring they were not overly sectarian, and keeping government employees from becoming entangled in vetting religious material.

Some discussion arose about whether the town council constitutes a legislative body, where outside participants are not required to attend, or if its differing responsibilities mean some citizens are compelled to appear before the meetings to conduct municipal business.

In an exchange with attorney Douglas Laycock, who represented the Greece residents who sued, Justice Elena Kagan observed that when someone petitions the government, "we do so not as a Christian, not as a Jew, not as a Muslim, not as a nonbeliever, only as an American."

She said "what troubles me about this case is that here a citizen is going to a local community board, supposed to be the closest, the most responsive institution of government that exists, and is immediately being asked, being forced to identify whether she believes in the things that most of the people in the room believe in, whether she belongs to the same religious idiom as most of the people in the room do."

Justice Anthony Kennedy told the attorneys he didn’t like the thought that government employees or even judges would be asked to analyze prayers to decide whether they meet a standard for being nonsectarian.

"That involves the state very heavily in the censorship of prayers," he said.

But Kennedy also seemed troubled with the town’s reliance on the standard from Marsh, as providing a strong enough historical reason to allow the prayers to continue.

"Well, the essence of the argument is we’ve always done it this way, which has some — some force to it. But it seems to me that your argument begins and ends there," he told deputy solicitor general Ian Gershengorn, who argued for the town’s position on behalf of the Obama administration.

The court will issue a ruling on the case before it adjourns in late June.