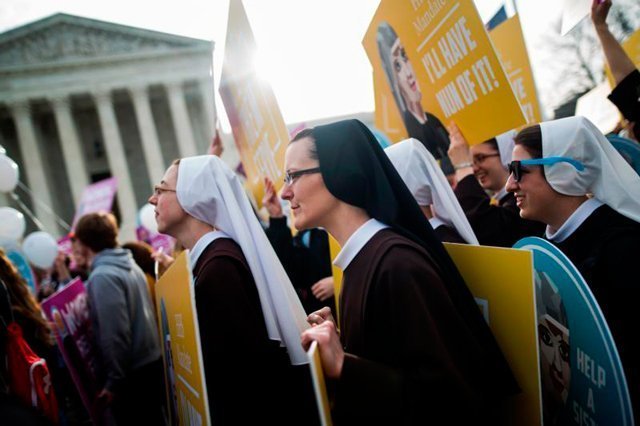 WASHINGTON (CNS) — Immediately after the Supreme Court sent the contraceptive case back to the lower courts May 16, some called the decision a punt — the football analogy of sending the ball back to the other team — or in this case the lower courts.

But the analogy falls short on a practical level because the seven consolidated cases in Zubik will be sent back to the lower courts with a very different look — bearing the stamp of being vacated by the nation’s high court.

The 3rd, 5th, 10th and D.C. Circuit Court of Appeals — which ruled in favor of the Affordable Care Act’s contraceptive mandate and did not see it as posing a substantial burden to the petitioners’ free exercise of religion — now must give another look at the issue equipped with the new information submitted to the Supreme Court showing a possible compromise.

Although the justices’ unanimous decision in Zubik v. Burwell took many by surprise, others said they saw something like this coming when the Supreme Court essentially showed its hand asking both sides to provide ways to implement the contraceptive mandate that would satisfy both sides.

"Contrary to most press coverage, this was not a punt," said Michael McConnell, a law professor at Stanford Law School in California, writing about the Zubik ruling. He described the decision as "a compromise in which the Little Sisters won the case but no precedent was set for the future. This is unorthodox, but arguably Solomonic," he added.

Hannah Smith, senior counsel for the Becket Fund for Religious Liberty, which is representing the Little Sisters of the Poor in the case, similarly didn’t buy the sports analogy that grabbed headlines.

"I don’t see it as a punt at all," she told Catholic News Service May 27. She said the Supreme Court was not just returning the cases to the lower courts but was "very specific in its order and outlined several points" such as forbidding the government from levying fines on the groups that objected to the contraceptive coverage, erasing previous court decisions and telling the courts to essentially find a feasible resolution.

In other words, when the court sent these cases back, it also sent guidelines for a new way forward.

Smith said the court’s decision was essentially telling the federal government: "You can do this in a different way, now you have to go back and do it."

She said it is going to take some time for this to work through the courts and she couldn’t predict a time frame for it.

It has already been nearly five years that religious groups have been involved in challenging the Affordable Care Act’s contraceptive mandate. The Department of Health and Human Services announced an "interim final rule" in August 2011 requiring that coverage of contraceptives approved by the Food and Drug Administration be included in most employees’ health plans. The rule provided a narrow religious exemption to the mandate that only applied to houses of worship and did not include most religious universities, schools, social service agencies, outreach ministries or health care providers.

The plaintiffs don’t seem daunted by the time it is taking for a resolution. Washington Cardinal Donald W. Wuerl said in a statement after the Supreme Court’s decision that the court’s opinion offered a path forward but "this struggle will continue."

The Washington Archdiocese is one of seven plaintiffs in the consolidated Zubik case.

Now the question for both sides is whether the courts follow the Supreme Court’s cue and find a compromise.

In a post for scotusblog.com, University of Notre Dame law professor Richard Garnett wrote that the courts could possibly "extend unwarranted deference to the government’s assertions about ‘compelling interests’ and the least restrictive ways of accomplishing them or engage in ungenerous second-guessing of religious claimants’ descriptions of the burdens imposed by government action on their religious exercise."

Legal experts say the government could either decline to cooperate on a solution or could change its regulations to implement the Supreme Court’s opinion and adopt a less restrictive alternative for religious employers who currently would need to have a third party to provide contraceptive coverage through their health insurance. However, the government would still need to determine how to accommodate religious objectors that self-insure.

While the final outcome hangs in the balance, Garnett said the case itself highlights a troubling sign about the accommodation of religion.

"To the extent, the right to religious freedom is regarded as a luxury good, a license to do wrong, or as special pleading by the culture war’s losers, it is increasingly vulnerable," Garnett wrote. "This should concern us all, because believers and nonbelievers alike benefit from a legal and cultural commitment to religious freedom and have a stake in the legal regime that respects and protects it."