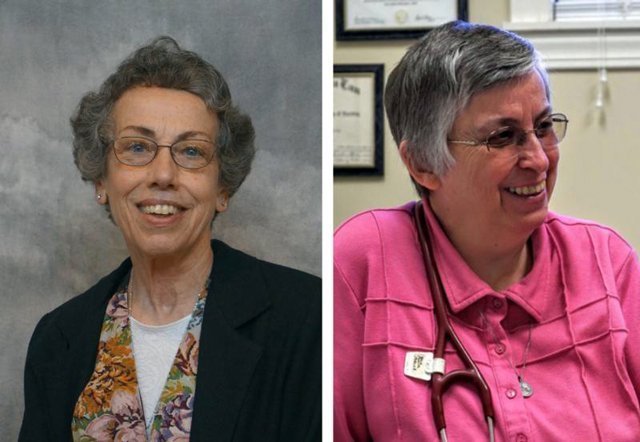 Sister Margaret Held, 68, a member of the School Sisters of St. Francis in Milwaukee, and Sister Paula Merrill, 68, a member of the Sisters of Charity of Nazareth in Kentucky, are pictured in undated photos. The two women religious were found stabbed to death Aug. 25 in their Durant, Mississippi, home, police said.
By Dennis Sadowski
Catholic News Service
WASHINGTON (CNS) — Police continued to search for the killer of two women religious who spent years caring for poor people as nurse practitioners in central Mississippi.
Sister Margaret Held, 68, a member of the School Sisters of St. Francis in Milwaukee, and Sister Paula Merrill, 68, a member of the Sisters of Charity of Nazareth in Kentucky, were found stabbed to death Aug. 25 in their Durant, Mississippi, home, police said.
The sisters had worked at the Lexington Medical Clinic in Lexington, about 10 miles from the house they shared.
Warren Strain, spokesman for the Mississippi Department of Public Safety, said police discovered a car missing from the nuns’ home the evening of Aug. 25 on a secluded street late about a mile from where the women were found dead.
Police officers discovered the women’s bodies after co-workers called asking to check on them after they failed to report for work at the clinic.
"These were just two wonderful faith-filled women who just brought so much life to this poor little section of Mississippi. They and so many of the sisters who have come down here throughout the years are the unsung heroes," said Franciscan Father Greg Plata, sacramental administrator of St. Thomas the Apostle Church in Lexington, where the sisters participated in parish life.
"They just bring the light of Christ to this area here. Both were extremely loved by the people in the area," Father Plata told Catholic News Service in a telephone interview Aug. 26.
"These two sisters wouldn’t hurt a flea. It’s almost incomprehensible that someone could perpetrate such a violence against them," the priest added.
Dr. Elias Abooud, the clinic’s owner, told The Clarion-Ledger newspaper in Jackson, Mississippi, the deaths are "a loss to the community. They were loved by everybody."
Authorities have released few details about the crime, but police suspect robbery was a motive.
Bishop Joseph R. Kopacz of Jackson commended the sisters for their years of dedicated service.
"They absolutely loved the people in their community," he said. "We mourn with the people of Lexington and Durant and we pray for the Sisters of Charity, the Schools Sisters of St. Francis and the families left behind."
Sister Susan Gatz, president of the Sisters of Charity of Nazareth, asked for prayers of gratitude "for the precious lives of Sisters Paula and Margaret" in a statement on the community’s website. "They served the poor so well. Because we are Gospel women, please also pray for the perpetrators," the statement said.
Sister Susan also asked for prayers for the women’s families, their religious communities, those who work at the medical clinic, the clinic’s clients and the community of Durant.
The leadership team of the U.S. province of the Schools Sisters of St. Francis in a statement announced its shock and grief over hearing the news of the deaths.
"Sister Margaret has been a member of our community for 49 years and lived her ministry caring for and healing the poor," the leadership team said. "Please keep Sister Margaret, Sister Paul and their families and loved ones in your prayers."
Sister Paula, a native of Massachusetts, moved to rural Mississippi in 1981, serving in health care ministry for more than 30 years. She joined the Lexington clinic in 2010.
A video about Sister Paula’s ministry recently posted on her community’s website described her ministry in rural Holmes County, where 62 percent of the children live in poverty.
"I have been so edified by the faith of the people I have cared for," Sister Paul said in the video. "They challenge me, they inspire me."
Sister Margaret first ministered in Mississippi as a social worker at a health center in Holly Springs in 1975. She relocated to Omaha, Nebraska, from 1981 to 1983 as a community health nurse with the Visiting Nurse Association before returning to Mississippi that year. She became a nurse practitioner in 1994, serving in Tupelo, Marks and Lexington. She began her service with her religious order as a teacher at St. Joseph High School in Kenosha, Wisconsin.
Archbishop Joseph E. Kurtz of Louisville, Kentucky, said Aug. 25 in a statement that the sisters "leave a legacy of dedication to their consecrated life and deep compassion for those they served."
He asked the faithful to "join me in praying for the repose of the souls of Sister Paula and Sister Margaret and for their families and religious communities. May they rest in peace."
Meanwhile, Archbishop Jerome E. Listecki of Milwaukee held up the example of the sisters for their service.
"Any act of violence is always a tragedy for the entire community," he said Aug. 25. "A random act of violence makes no sense. When an act of violence is perpetrated on a sister who has dedicated her life to performing good works and serving the community in the name of Jesus, that act of violence is magnified in a multitude of ways."
– – –
Contributing to this story were Marnie McAllister, editor of The Record in the Archdiocese of Louisville, Kentucky, and Maureen Smith, editor of the Mississippi Catholic in the Diocese of Jackson, Mississippi.
Copyright © 2023 Catholic News Service, Inc. All rights reserved. Linking is encouraged, but republishing or redistributing, including by framing or similar means, without the publisher's prior written permission is prohibited.