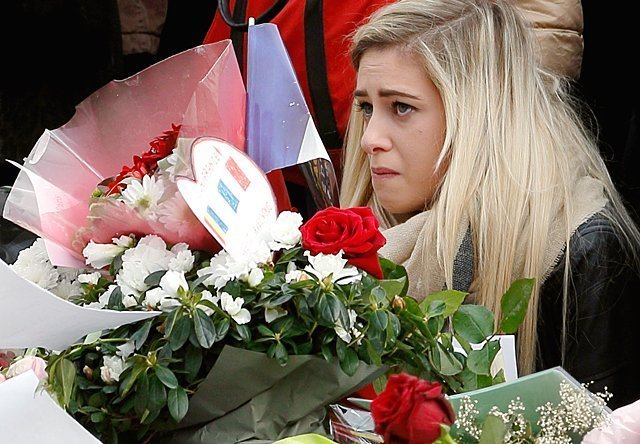 A woman observes a moment of silence in Republique square in Paris Nov. 16 after last fall’s terror attacks in France.
By Junno Arocho Esteves
Catholic News Service
VATICAN CITY (CNS) — Italian authorities arrested six suspects who allegedly received orders from the Islamic State terrorist group to attack the Vatican and the Israeli embassy in Rome.
The arrests made in Lombardy and Piedmont April 28 were the result of a joint operation coordinated by the district attorney of Milan and the Italian anti-terrorism agency.
According to the Italian news agency ANSA, authorities arrested Abderrahim Moutaharrik and his wife, Salma Bencharki; Abderrahmane Khachia, and three people who have maintained contact with a couple that left Italy to join the Islamic State in Syria. All of the suspects are of Moroccan origin.
A warrant has been issued for the couple, Mohamed Korachi and his Italian wife, Alice Brignoli, who are believed to have left for Syria in 2015.
Authorities monitored a series of conversations between the suspects via WhatsApp. One of the messages sent to Moutaharrik said: "Dear brother Abderrahim, I send you … the bomb poem … listen to the sheik and strike," ANSA reported.
Milan prosecutor Maurizio Romanelli told reporters authorities believe the word "sheik" is a reference to Islamic State leader Abu-Bakir Al-Baghdadi. He also said the messages, intercepted in February and March 2016, mentioned a strike against the Israeli embassy as well as against Christian pilgrims in Rome for the Jubilee Year of Mercy.
"I swear I will be the first to attack them in this Italy of crusaders, I swear I’ll attack it, in the Vatican God willing," a message from one of the arrested suspects stated, according to ANSA.
Jesuit Father Federico Lombardi, Vatican spokesman, expressed his confidence in the current security measures in place for the Holy Year.
"The preventative security measures in place to protect pilgrims during the jubilee year are serious and functioning properly, as everyone can see and have witnessed. Therefore, there appears to be no need to modify them," he told Catholic News Service April 29.
– – –
Follow Arocho on Twitter: @arochoju.
Copyright © 2023 Catholic News Service, Inc. All rights reserved. Linking is encouraged, but republishing or redistributing, including by framing or similar means, without the publisher's prior written permission is prohibited.