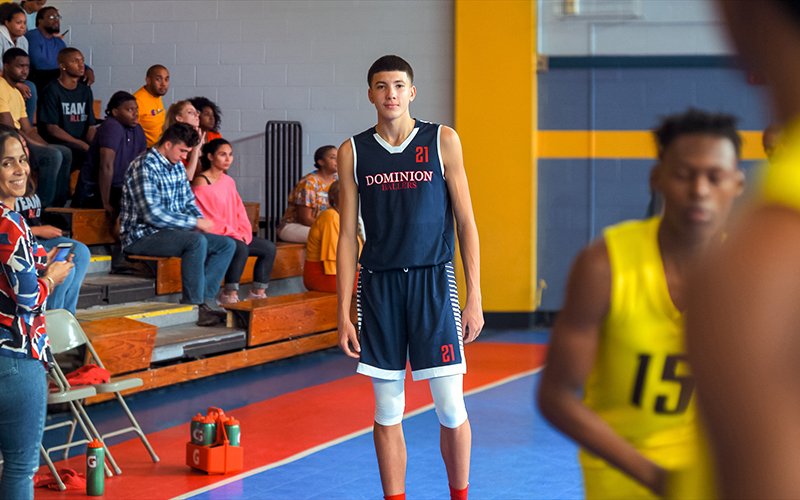 Jason River stars in a scene from the TV show "Swagger," streaming on Apple TV+. (CNS photo by Apple TV+)

In addition to being credited as one of the show’s executive producers, Durant’s personal history informs its narrative.

Although uneven and heavy-handed, the program has a sufficient number of refreshingly positive, honestly sympathetic and sweet moments to sustain it. The first three one-hour episodes are available on Apple TV+. Further installments will be released each Friday through Dec. 17.

Filmmaker Reggie Rock Bythewood created “Swagger.” Others working behind the scenes include Brian Grazer, who, together with Ron Howard, established Imagine Entertainment, one of the companies that produced the series.

Set in the Washington suburb of Seat Pleasant, Maryland, where Durant grew up, “Swagger” focuses on eighth grader and hoops star Jace Carson (Isaiah R. Hill). With high school looming, Jace’s single mother, Jenna (Shinelle Azoroh), is determined to find the right coach to take her son to the next level. She believes Ike Hill (O’Shea Jackson Jr.) is the man for the job.

Ike, nicknamed “the Icon,” played for Georgetown University and overseas, but didn’t make it to the NBA. That disappointment, viewers sense, informs the way he drives his new protege to excel.

Because his wife, Tonya (Christina Jackson), is pregnant with their first child, Ike has money worries. A potentially lucrative offer from a former teammate, Lester Davis (Deric Augustine), presents Ike with an ethical quandary and could force him to come to terms with aspects of his past he would rather forget.

The series gets off to a rocky start. A scene where Ike humiliates Jace in a one-on-one game when they first meet, for instance, feels overwrought and unconvincing. Similarly, a confrontation between Jace and the police — he’s accused of carjacking when, in fact, all he was doing was taking out the trash — registers as a flimsy bid for relevance that’s hardly plausible.

Yet the show does defy stereotypes about poorer communities. Thus most of the adults with whom Jace interacts are gainfully employed and Jace himself, far from being a dumb jock, is an honor student.

“Swagger” also features a clear-eyed examination of the world of youth basketball. It’s a culture marred by the commercialism of shoe companies, the insidious omnipresence of social media, excessive competition and universal opportunism.

Even as it showcases these ills, however, the program never loses sight of its characters’ humanity. So, despite some serious defects, “Swagger” exerts enough appeal to engage many of the adult viewers for whom it’s suitable.