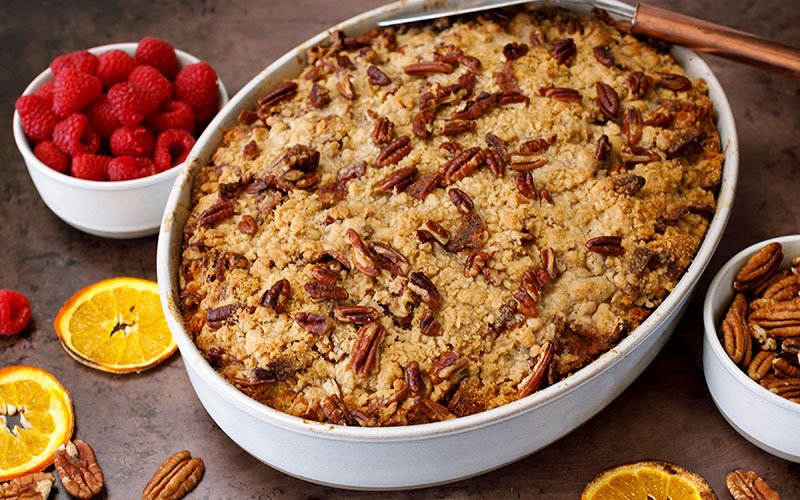 Christmas recipe: Soup for your soul and loved ones

Once thought to be more valuable than gold, cinnamon is mentioned in the Bible as one of the finest of spices. Sourced from the bark of a specific evergreen tree, it has been used for thousands of years as a fragrance and seasoning.

Sweet, woody, warm notes complement sugar perfectly, so cinnamon is found in sweet recipes more than savory ones. During fall and winter, the cinnamon jar is sure to get a good shaking for all sorts of baked goods — cookies, pastries, breads and other treats.

Cinnamon is a feature of this showstopping breakfast casserole. For Christmas Day serving, prepare most of it the night before and bake in early morning. If the family has yet to rise, the smell of french toast, cinnamon and smoky bacon will surely get them up and moving.

Start by cooking the bacon ahead. Thick-sliced bacon works best in this dish. Cook it until just crisp and let it drain on paper towels. Once it’s cool, chop into rough pieces, throw it into a covered dish or plastic bag and keep in the fridge until ready to bake the casserole.

An egg and butter bread like challah or brioche adds richness to the dish, but you can also use French bread. Be sure to use whole milk and heavy cream. If you substitute low-fat dairy, you may end up with a watery interior instead of a rich custard-like filling.

For the custard bread

If you plan to assemble the casserole the night before, prepare the bacon and the streusel topping and refrigerate both in separate containers. If you make the casserole the same day as baking, allot an hour of time for bread to soak up the egg mixture.

Liberally grease a large, deep casserole or 9-by-13 baking pan, then add the bread cubes.

Whisk or blend the eggs with milk, cream, sugar, cinnamon, vanilla and salt. Pour mixture over the bread cubes and gently press down until bread is submerged. Cover the casserole with plastic wrap and allow to rest for 1 hour in the refrigerator. Alternatively, leave in the refrigerator overnight.

Prepare the streusel topping by mixing the flour with sugar, cinnamon and salt. Using a pastry cutter, cut in the butter until pea-size crumbs form. Stir in pecan pieces.

Remove the casserole from the fridge.

Uncover the casserole and sprinkle chopped bacon over the bread. Then cover the entire casserole with streusel mix.

Bake 45-55 minutes. The casserole should be puffy and nicely browned on top. Remove from the oven and let rest for 10 minutes.