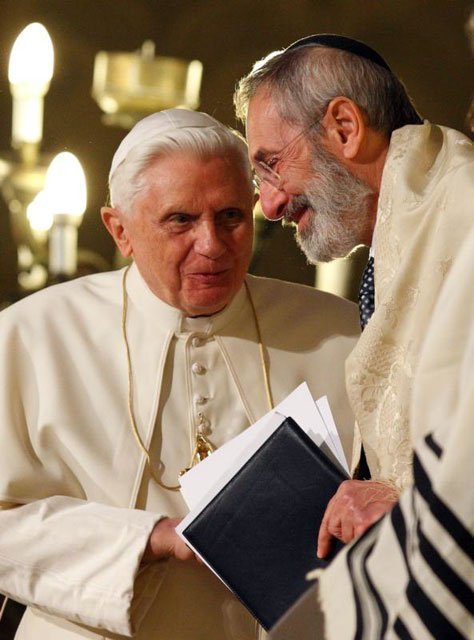 ROME (CNS) — History and geography have combined to make Catholic-Jewish relations in Rome unique, both negatively and positively — a fact highlighted by modern papal visits to the city’s main synagogue just two miles from the Vatican.

Pope Francis was scheduled to visit the synagogue Jan. 17, just as Pope Benedict XVI did in 2010 and St. John Paul II did in 1986.

The city’s Jewish community existed before Jesus was born "and the Christians who arrived here were (originally) Jews themselves so this place has an enormous symbolic meaning," said Rabbi Riccardo Di Segni, the chief rabbi of Rome. But, "the persecution we suffered, persecution by the church" for centuries, including the 300 years when popes forced the city’s Jews to live in a ghetto, also makes Rome unique.

The main synagogue "was built on the ruins of the ghetto," the rabbi told Catholic News Service Jan. 14 as he and his staff prepared to welcome the pope.

Especially since the Second Vatican Council, the general trend in relations between the popes and Rome’s Jewish community, like between Catholics and Jews elsewhere, is "good relations, friendship" and the possibility of confronting with frankness any problems that arise, Rabbi Di Segni said.

The rabbi has met with Pope Francis several times and has had telephone conversations with him as well; "there is always an open line in case of necessity."

"This visit is important because it gives two important signals: The first signal is continuity," demonstrating that "the route opened by John Paul II and followed by Benedict XVI is now going forward," he said. The second signal is a recognition of the importance of mutual respect and dialogue at a time of increasing "violence inspired and sustained by distorted visions of religion."

"We are a kind of symbolic center, due to our history and position," he said, for demonstrating to the world that dialogue and peace are possible even between communities with a painful history and that centuries of denying or denigrating the other’s beliefs can come to an end.

The rabbi said he hopes Pope Francis will make some public reference to "The Gifts and the Calling of God Are Irrevocable," a statement issued in December by the Pontifical Commission for Religious Relations With the Jews. The statement provides a brief summary of 50 years of Catholic-Jewish dialogue, looks at some theological questions that have arisen in the dialogue and states that the Catholic Church "neither conducts nor supports" any institutional missionary initiative directed toward Jews.

"The point about the conversion of the Jews is very important to contributing to improving relations," the rabbi said, and for creating "a positive atmosphere, without any doubts" about Catholics’ motivations for engaging in dialogue with Jews.

The document, which is theological in nature, needs to reach the public, the rabbi said, and the pope speaking about it during his visit to the synagogue would help.

While Rabbi Di Segni knows the pope "is the pope of surprises," he was expecting Pope Francis to speak about mercy at the synagogue since it is the Year of Mercy and the virtue is a theme in almost every papal speech.

The Rome rabbi said he appreciates that in talking about God’s mercy Pope Francis has rejected a facile and false dichotomy that contrasts the God of the Hebrew Scriptures with the God of the New Testament as if the Jews believed only in "the God of justice" and Christianity invented "the God of mercy."

Pope Francis "is much more honest and linked to the basic biblical tradition which speaks about ‘a God of justice and mercy’ together," the rabbi said.

"We appreciate this and we appreciate that mercy must be a central point in our relations," he said. "God gives us the example, the model" for how people must behave toward one another.

A video to accompany this story can be found at https://youtu.be/Js8gvbKLszA