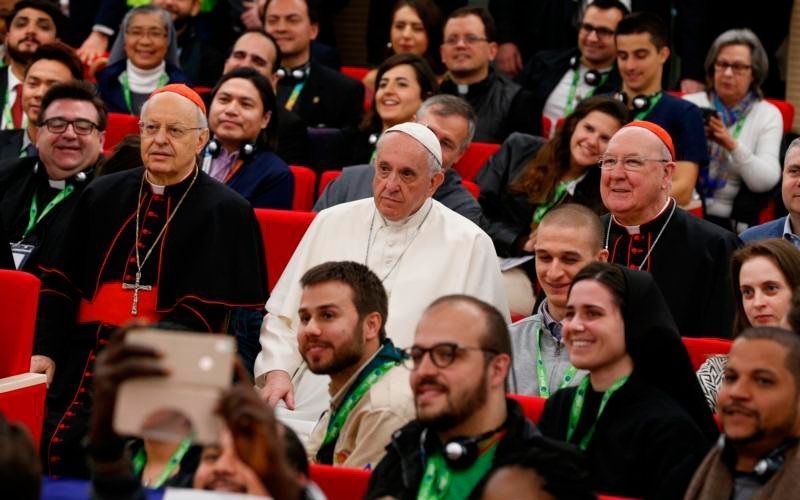 Pope Francis is pictured next to Cardinal Lorenzo Baldisseri, secretary-general of the Synod of Bishops, and Cardinal Kevin Farrell, head of the Vatican's Dicastery for Laity, the Family and Life, during a group photo at a pre-synod gathering of youth delegates in Rome March 19. The Synod of Bishops on young people, the faith and vocational discernment will take place Oct. 3-28 at the Vatican. (CNS photo by Paul Haring)

VATICAN CITY (CNS) — To strengthen and support young people in the faith, members of the Synod of Bishops will need to listen to their real-life stories, interpret what they hear in the light of the Gospel and make decisions that will lead to an authentic renewal of the Catholic Church, said Brazilian Cardinal Sergio da Rocha.

“Often we hear voices that blame young people for moving away from the church. But many of them have lived in situations that lead them to affirm that it was the church that moved away from them,” said Cardinal da Rocha, archbishop of Brasilia and relator general of the Synod of Bishops 2018.

The Brazilian cardinal will introduce the work of the synod Oct. 3 and, midway through the gathering, will summarize the speeches individual bishops have made in the synod hall.

The synod will meet Oct. 3-28 to discuss “young people, the faith and vocational discernment.”
Introducing the synod at a news conference Oct. 1, Cardinal Lorenzo Baldisseri, synod general secretary, said it will have 267 voting members, including two bishops from mainland China. While Chinese bishops always have been invited to the synod, he said, the agreement signed by the Vatican and the Chinese government Sept. 22 made it possible for bishops to attend.

The synod’s members include 15 heads of Eastern Catholic churches, 16 heads of Vatican offices, 15 members of the synod’s permanent council, 181 members elected by national bishops’ conferences and the men’s Union of Superiors General and 40 members named by Pope Francis. Eighteen of the voting members are priests; two are religious brothers.

The synod released Oct. 1 a new “Instruction of the Celebration of Synodal Assemblies and on the Activity of the Secretary General of the Synod of Bishops.” The document specifies that religious brothers may be voting members of a synod, but women may not.

Cardinal Baldisseri said, however, that the synod observers, which include women and 34 young people between the ages of 18 and 29, can participate in the synod’s working groups and are encouraged to help formulate the synod’s final resolutions.

The instruction and Pope Francis’ new constitution on the synods, which was published Sept. 18, looks to the future, but “first of all looks to the past, to the deposit of faith and the tradition of the church,” the cardinal said. “It is the structure of the church for a synod of bishops. Obviously, there is an increasing effort to involve the entire people of God.”

Asked whether the ongoing clerical sexual abuse crisis should or will dominate the synod discussion, the cardinal said the synod is an opportunity to explain to young people and everyone that “this is not the church.”

“Certainly, the scandals in the church that have come to light recently strike the mind and the heart,” the cardinal said, but he is certain young people are “able to understand human fragility.”

“I honestly do not think it (the scandal) is an impediment” to the synod’s task, he said. “In fact, perhaps it is an occasion to awaken the church.”

Having bishops from around the world gathered in Rome with the pope, Cardinal Baldisseri said, “is a unique opportunity to explain and help young people and adults understand what the church is. The church is not represented by some who make mistakes.”

He also was asked about an article Archbishop Charles J. Chaput of Philadelphia had printed in the magazine First Things presenting an anonymous theologian’s critique of the synod’s working document. In a later exchange in the magazine, the archbishop wrote that he agreed with the critique, which claimed the document had a “pervasive focus on socio-cultural elements” rather than religious and moral issues, that it emphasizes the church’s obligation to listen over its obligation to teach and that its understanding of vocation is heavily focused on “private meaning and truth,” rather than service.

Cardinal Baldisseri, who did not refer to Archbishop Chaput by name, noted that the bishop who complained is a member of the synod’s permanent committee and was present when a draft of the document was presented before publication. “If he had any objection, he could have said so; we would have included that, calmly. But I don’t understand why, later, he made a declaration. It’s a matter of loyalty and honesty.”

Copyright ¬© 2018 Catholic News Service/U.S. Conference of Catholic Bishops. www.catholicnews.com. All rights reserved. Republishing or redistributing of CNS content, including by framing or similar means without prior permission, is prohibited. You may link to stories on our public site. This copy is for your personal, non-commercial use only. To request permission for republishing or redistributing of CNS content, please contact permissions at cns@catholicnews.com.