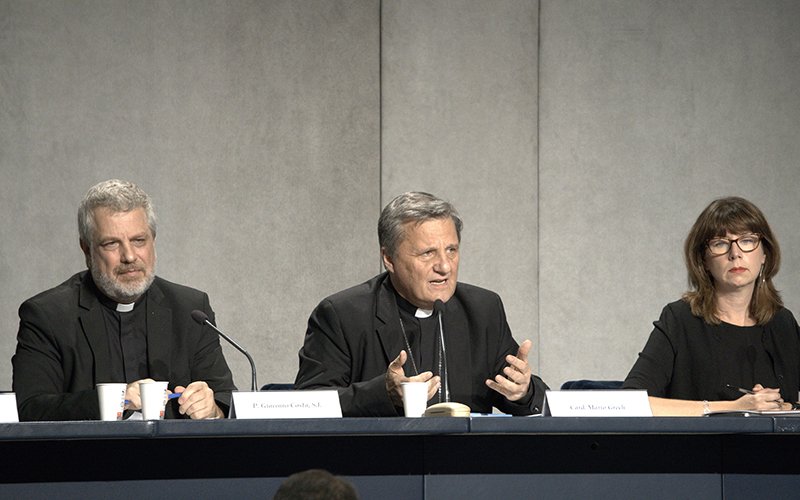 Cardinal Mario Grech, center, secretary-general of the Synod of Bishops, speaks at a news conference at the Vatican Oct. 27 to present the document for the continental phase of the Synod on synodality. Also pictured are Italian Jesuit Father Giacomo Costa, adviser to the secretary-general of the synod, and Anna Rowlands, professor of Catholic social thought and practice at Durham University in the United Kingdom. (CNS photo by Junno Arocho Esteves)

VATICAN CITY (CNS) — Around the world, listening sessions for the Synod of Bishops gave many participants a sense of finally being listened to, but they also raised questions about how to promote greater inclusion in the Catholic Church while staying true to church teaching.

Two of the issues raised most often in reports sent to the Vatican were the need to respect and value the contributions women make to the church and the need to face “the impact of a lack of trust and credibility resulting from the abuse crisis,” according to the working document for the synod’s continental stage.

Document result of group reflection on the syntheses of synod discussions

Titled “Enlarge the Space of Your Tent” — the Lord’s command to the people of Israel in the Book of Isaiah — the document said, “This is how many reports envision the church: an expansive, but not homogeneous dwelling, capable of sheltering all, but open, letting in and out, and moving toward embracing the Father and all of humanity.”

The document released Oct. 27 is the result of a group reflection on the syntheses of synod discussions submitted by 112 of the world’s 114 bishops’ conference, all 15 Eastern churches, 17 of the 23 dicasteries of the Roman Curia, the men’s and women’s international unions of superiors general, dozens of Catholic associations and more than 1,000 individuals, it said.

The general secretariat of the synod chose an international group of laity, religious, priests and bishops to read the submissions, pray about them and then draft a document that would help participants in the next phase reflect on the faith, hopes and concerns witnessed to in the reports. The document was approved by the cardinals and bishops belonging to the synod’s general council.

What emerged from the reports, it said, “is a profound re-appropriation of the common dignity of all the baptized. This is the authentic pillar of a synodal church and the theological foundation of a unity which is capable of resisting the push toward homogenization. This enables us to continue to promote and make good use of the variety of charisms that the Spirit with unpredictable abundance pours out on the faithful.”

Those who most often feel unwelcome in the church or undervalued, it said, include: women, young people, people with disabilities, the poor, those who are divorced and civilly remarried, single parents, those in polygamous marriages and members of the LGBTQ communities.

Responding to experiences of exclusion and discrimination shared by Catholic with disabilities, the document said that “in spite of its own teachings, the church is in danger of imitating the way society casts them aside.”

Reflecting the central place of the Eucharist in the life of the church, it said most submissions included a call for greater participation by all Catholics in the liturgy, working to ensure that it is less “concentrated on the celebrant,” involves more young people and women, including in preaching, and is more reflective of local cultures.

At the same time, the document also noted that in several reports, including that from the United States, some participants in the local listening sessions “lamented” Pope Francis’ decision to limit celebrations of the Latin-rite Mass according to the rite used before the Second Vatican Council.

“The quality of homilies is almost unanimously reported as a problem,” it said.

But the document also highlighted a common desire to find solutions to various forms of “sacramental deprivation,” including for people in remote towns and villages without a priest, as well as for civilly remarried Catholics and those in polygamous marriages.

While the reports were not “against priests or the ministerial priesthood,” the document said, many of them cited “clericalism” as an obstacle to being a “synodal church,” one where all the baptized share responsibility for the life of the community and for its mission of spreading the Gospel.

“Clericalism is seen as a form of spiritual impoverishment, a deprivation of the true goods of ordained ministry, and a culture that isolates clergy and harms the laity,” it said. Clericalism produces “rigidity, attachment to legalistic power and an exercise of authority that is power rather than service.”

In synod listening sessions around the world, participants noted that women are the majority of Catholics regularly attending the liturgy and staffing most paid and volunteer parish activities, yet it is mostly men who make the decisions in the church.

“Many reports ask that the church continue its discernment in relation to a range of specific questions: the active role of women in the governing structures of church bodies, the possibility for women with adequate training to preach in parish settings, and a female diaconate,” the document said. “Much greater diversity of opinion was expressed on the subject of priestly ordination for women, which some reports call for, while others consider a closed issue.”

Between January and March, smaller groups of church representatives are to meet on a continental or regional level; organized by bishops’ conferences, the groups are to include bishops, priests, religious and laypeople to read the document, pray about it and discuss which issues raised it in are most important and urgent for Catholics in their region to address in order to increase participation, a sense of communion and a commitment to missionary outreach.