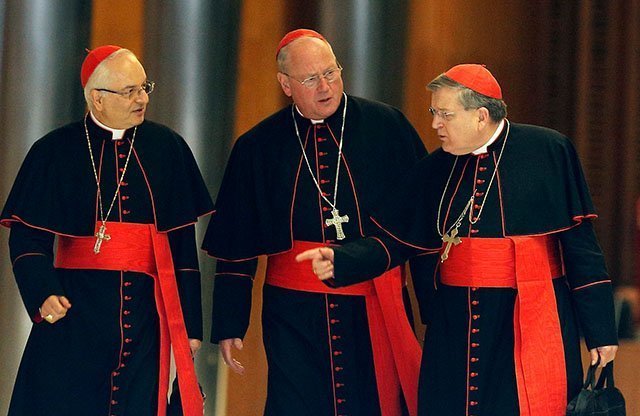 Cardinals Mauro Piacenza, prefect of the Congregation for Clergy, Timothy M. Dolan of New York, and Raymond L. Burke, prefect of the Supreme Court of the Apostolic Signature, talk as they walk through Paul VI hall before the morning session of the extraordinary Synod of Bishops on the family at the Vatican Oct. 16.

VATICAN CITY (CNS) — The extraordinary Synod of Bishops on the family must put greater focus on the beauty of the Christian vision of marriage and not let an approach of "welcoming" and mercy override the church’s duty to call people to turn away from sin, according to a number of reports from the synod’s small groups.

While the Oct. 4-19 synod was convened to talk about the pastoral challenges facing today’s families, its midterm synod report put too much emphasis on the problems, which risked making families and young people not want to bother with trying to make a marriage work, some synod groups said.

The frank comments and concerns were outlined in a 35-page compilation of the full written reports the synod’s 10 working groups submitted to the committee drafting the final synod document. The groups also submitted "hundreds" of proposals for line-by-line changes to the midterm report; those proposals were not released.

The groups, divided by language, met Oct. 13-16 to discuss and propose changes, amendments and clarifications to the synod’s midterm report, which was released Oct. 13.

Many of the working groups wanted a substantial reworking of the parts of the midterm report emphasizing the importance of a church that reaches out to families and people hurting in today’s world — including cohabitating couples, divorced and remarried Catholics and homosexual couples — and accompanies them back into the church.

Almost all of the language groups wanted to see a deeper emphasis on the beauty and attraction of God’s vision of an indissoluble marriage between one man and one woman who are open to life.

"Many in the group felt that a young person reading the ‘relatio’ (midterm report) would, if anything, become even less enthusiastic about undertaking the challenging vocation of Christian matrimony," said the English group that included Cardinals Timothy M. Dolan of New York, Wilfrid F. Napier of Durban, South Africa, and Archbishop Diarmuid Martin of Dublin.

Someone needs to step up and be vocal about the joyous path of Christian living, and "such clear leadership can only come from the church," the group said. "A failure to give such witness would be to fail humanity."

The group, led by U.S. Cardinal Raymond L. Burke, said the synod’s final document must proclaim the truth of the Gospel, human life and sexuality as based on revelation and natural law, because pastoral care "cannot be separated from church teaching." The group also included Cardinals Gerhard Muller, prefect of the Congregation for the Doctrine of the Faith; Vincent Nichols of Westminster, England; Peter Turkson, president of the Pontifical Council for Justice and Peace; and U.S. Byzantine Archbishop William C. Skurla of Pittsburgh.

The group criticized the midterm report’s "methodology" of first listening to the people before it judged and discerned a course of pastoral action. Instead, the group said, the church always must "see" the world "through the lens of the Gospel" so as to be able to love and care for people, "while at the same time honestly recognizing and acknowledging sinful situations, and searching for ways to invite conversion of heart."

The group felt the midterm report appeared to suggest sex outside marriage and other irregular lifestyles may be permissible. While "there are seeds of truth and goodness found in the persons involved, and through dedicated pastoral care these can be appreciated and developed," the group said any implication that immoral behavior is acceptable would leave "concerned and worried parents" wondering, "Why are we trying so hard" to teach children the Gospel?

The third English group, which included Cardinal Donald W. Wuerl of Washington, D.C., Archbishop Joseph E. Kurtz of Louisville, Kentucky, and Archbishop Denis Hart of Melbourne, Australia, said it did not want the final report to weaken any sense of hope that "fruitful, lifelong commitment in marriage is attainable."

The church must reach out "to welcome, without judgment or condemnation, those people who, for some reason, are not yet able to express lifelong commitment in a marriage between a man and a woman," the group said. But it also called for care in how one expresses God’s love for people because "we may inadvertently convey the impression that marriage is not important, or that it is an ideal that only a few select people can achieve," it said.

But the group also affirmed the church’s responsibility to "express a judgment" on the problematic issues in today’s culture. The church should not be afraid of its prophetic role and must warn "the wicked" of God’s punishment if they do not change "their evil conduct," the group said, citing the Book of Ezekiel (3:17-19).

The French group led by Austrian Cardinal Christoph Schonborn of Vienna and including Archbishop Paul-Andre Durocher of Gatineau, Quebec, said the challenge is to combine "love of truth and pastoral charity in a way that does not shock" those who are striving to follow all of the church’s teaching. The group referred to the "elder son" in the parable of the Prodigal Son and his dismay at seeing his father throw a party when his sinful younger brother returned, but never having given a party for him when he stayed and worked.

The group, which included many African bishops, affirmed "respect and welcome for homosexuals" and decried discrimination against them. However, it said the church cannot "legitimize homosexual practices, much less recognize a so-called homosexual ‘marriage’" and it denounced international organizations that tie financial aid to the adoption of more liberal laws.

The Italian group that included several curial officials — among them Cardinals George Pell, Francesco Coccopalmerio, Kurt Koch and Archbishop Vincenzo Paglia — said "two diverse perceptions" emerged in the synod discussions. One approach said there should be no hesitation in using such terms as "’sin,’ ‘adultery’ and ‘conversion’" when talking about situations that were contrary to the Gospel. The other approach was to recognize that the desire for a family has been planted by God "in the heart of every person, even those faithful who for various reasons do not live in full conformity to the word of Christ."

A "lack of an awareness of sin and serious cultural conditions" often are the reason a Catholic does not live in conformity with church teaching, the group said. The final document should emphasize the need for improved education about the faith.

Contributing to this story was Cindy Wooden.