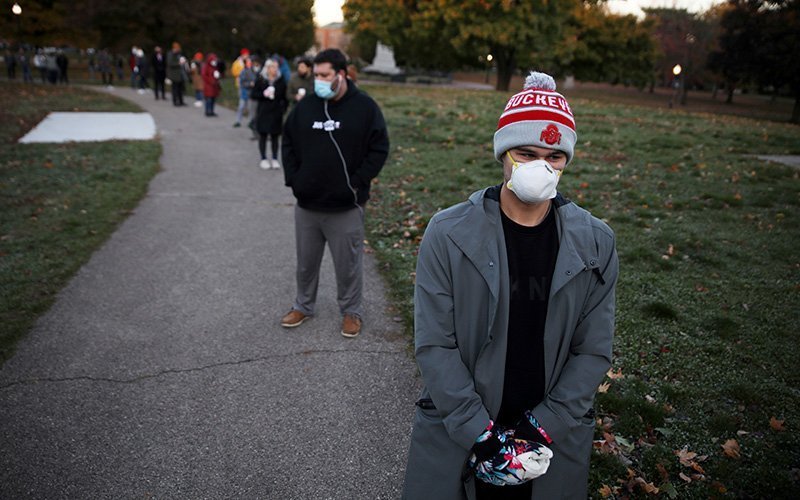 Ohio voters line up at a polling station on Election Day in Columbus Nov. 3, 2020. (CNS photo by Megan Jelinger, Reuters)

While postelection tensions are exceptionally high, Americans are not as ultra-polarized as the media portrays and they have the tools to help restore personal perspective and improve engagement with divergent opinions.

That was the takeaway from a webinar, “Ignatian Spirituality: Moving Forward Together,” hosted Nov. 4 as the contentious 2020 U.S. presidential election results were pending in ongoing vote counts following Election Day.

Le Moyne College in Syracuse, New York, hosted the virtual panel discussion as part of its webinar series, “Insights from the Heights,” which was led by Jesuit Father David McCallum, vice president for mission integration and development at Le Moyne. He previously served as special assistant to the president for mission integration and development.

Father McCallum, who joined the group meeting remotely from Italy, urged the Le Moyne College faculty, staff, alumni and students — as well as a host of other participating Jesuit institutions — to be “channels of God’s love” and to draw upon Catholic teaching to find a healthy way to engage in political and social disagreement rather than letting strong emotions run amuck.

“No matter what happens in the coming days there is so much healing that has to happen, and if we are going to be the nation we proclaim ourselves to be — and living abroad right now I see the incredible footprint and impact our county has around the world — we have to do better,” he said, adding that the COVID-19 pandemic adds an even greater context of stress and isolation to the election year.

“Each of us has a role to play; so the inner work of growing in our self-awareness and inner freedom, our own internal capacity and confidence to engage in a way that is not reactive but creative and discerning, this is the way, and it’s up to each of us,” the priest said.

Father McCallum said St. Ignatius begins one of his final spiritual exercises, “The Contemplation to Love Like God,” with a preamble stating that love is better manifested in deeds than in words.

“These times are not easy, loving those who hold very different perspectives than ourselves is not easy; loving at a time when the conditions don’t seem to support love is not easy and yet this is what we are called to,” Father McCallum said.

Right now, Americans, regardless of party affiliation, might feel like a victim in the present moment, he added.

“This is no place we want to spend any more time other than we just notice it then move forward together. How we do that will depend on each of us and all of us. We are not alone in this.”

“Having conversation with people who have our best interests at heart can be tremendously helpful in these times,” he said, adding this is a good time to “tend to our own garden first” before correcting other people for their imperfections.

“Ignatius said when you identify a change you would like to see in another person, it is best to start with yourself,” Father McCallum said. “Remembering that our view is partial, because we are at the center of our own reality, but we are not the only reality.”

Dialogue with people with whom we disagree or oppose calls for real curiosity, partiality and humility, he added.

“We (each) have our own reason and logic but dialogue involves not imposing an agenda on what everyone else thinks: Try to get down to that level without throwing judgments at people,” the priest said.

“Maybe Thanksgiving dinner is not the best time for this — maybe after, when we can open a space and discover together something that we didn’t already know,” he added.

Both St. Ignatius and St. Benedict before him, the priest said, understood that dialogue begins by being rational and giving the other person the benefit of the doubt, and remembering that most people operate under an assumption they are right and doing good.

“You can’t know that unless you really ask them, unless you are just making assumptions about the other person,” the priest said.

Father McCallum was speaking from Rome, where the Jesuit superior general has asked him to oversee the development and coordination of a new formation program for senior church leaders.

The mission of the Institute for Discerning Leadership, a project of the International Association of Jesuit Universities and the Office of Discernment and Apostolic Planning at the Jesuit General Curia, is to help support Pope Francis’ vision for renewal of the church through the process of discernment and co-creative synodality.

That new part-time role started last May and has allowed the priest to continue his work at Le Moyne.

Ordained in 2001, Fr. McCallum has provided hundreds of workshops and retreats, as well as spiritual direction and supervision for spiritual directors. In 2008, he completed his doctorate in adult learning and leadership at Columbia University’s Teachers College, a graduate school of education, health and psychology in New York.

Working from Italy during the U.S. election only reinforced Father McCallum’s view the media have been grossly overstating the political tensions and divisions of the American landscape.

“We have been pictured by media as polarized but I don’t believe that we are as separate as we may think we are and I don’t think you do in your own heart either,” he told the Zoom participants. “Let’s have hope and faith and love and put that love into deeds more than words.”

Also on the virtual panel discussion was Karin Botto, assistant vice president for human resources and organization development at Le Moyne College. She urged students and faculty to be mindful about who they choose to converse with following the election.

She suggested not seeking out hot-tempered and blood pressure-raising conversations inside the bubble of only like-minded associates.

“One thing that can be really helpful when we are having strong emotions is keeping a journal; many people find that helpful during difficult times: even just notating some bullet points or simple statements,” she said.

“Also being in nature, and not spending too much time on social media,” Botto suggested, adding that the college had planned the webinar well in advance knowing it would be needed after the election and that all the results might be unknown for some time.

“A lot of research shows that being in nature really changes us, lowers our blood pressure, helps us think better and solve problems: take a little walk and sit outside, get a good night sleep, eat well and surround ourselves with people we love.”

And it wouldn’t hurt to work on improving listening skills as well, she added, rather than just “agreeing to disagree” with opponents.

“Many of us think we are good listeners but are we actually not. There are actually six steps to good listening and one of them is being present, interpreting what the other person is saying without judgment,” Botto said.

“Once we know the other person’s story we can open our hearts as we listen, and not just bouncing other ideas off our own world.”