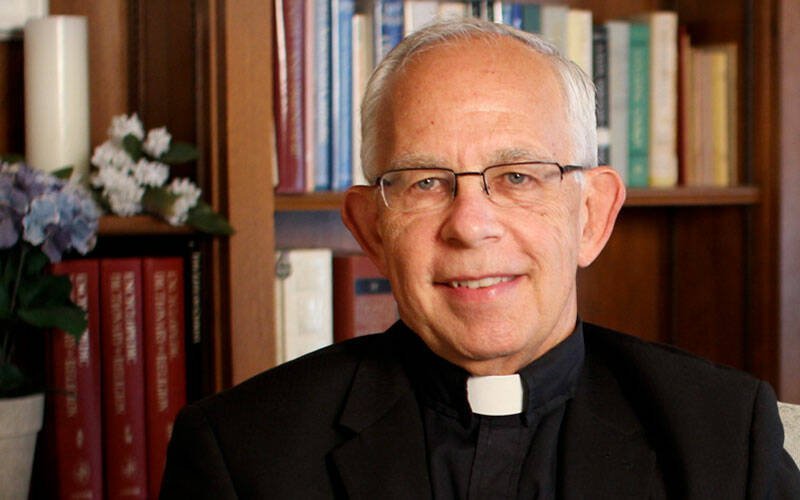 The way that Father John Rose sees it, our golden years can yield a wealth of golden opportunities.

“Everybody’s aging, and aging is not a disease, OK? We have no choice whether we age or not, but we have a choice in the way we age,” stated Father Rose, 75, during his Zoom presentation Nov. 1 about aging with wisdom, serenity and spirituality.

Speaking from Syracuse, where he serves as a senior priest in that diocese, Father Rose addressed parishioners from Elmira’s Most Holy Name of Jesus Parish. Several participants attended the session at the parish’s faith-formation center, and others logged in from their homes.

Father Rose noted to his audience that our early- and mid-adult years are marked by busyness and distractions due to career and parental commitments, often not leaving sufficient time for nurturing our inner selves. But he said that slowing our pace during our senior years — as well as detaching ourselves from unnecessary possessions — can yield more opportunities for prayer and reflection.

“It’s less about doing, and more about being,” he said.

Father Rose added that weighing our life experiences can bring about deeper self-realization, thus generating valuable wisdom that can be passed on to future generations — “aging into ‘saging,’” he said. He pointed out that senior citizens in many cultures are honored and valued for their wisdom, also noting that such role models as Pope Francis, Mother Teresa and Nelson Mandela have been revered worldwide for contributions to the greater good while in the later stages of their lives.

Although the pace of everyday living diminishes for most folks as they age, Father Rose said that today’s senior citizens are more healthy and active than in previous generations and are living longer as well. He suggested many possibilities for staying active — but not overactive — such as going for daily walks, bicycling, going to a gym, becoming more involved in parish activities, doing other volunteer work, spiritual reading, staying in touch with friends, joining a senior-citizen center, getting a part-time job or taking up a new hobby. He pointed out, for instance, that former President George W. Bush, now 75, has become an avid painter.

“We need to have a purpose when we retire,” said Father Rose, whose 49 years as a priest has included ministry as a pastor, spiritual director and retreat-house director. “It can be the most creative time of our lives.” However, he cautioned that the activities selected should be healthy in nature, as opposed to excessive amounts of television-watching, drinking, eating or gambling.

Asked by Father Rose what they enjoy most about growing older, Elmira participants noted their joy of grandparenting and having more time to do the things they want. As for what they don’t like, responses included physical pain, realizing there’s not enough time to do all the things they’d planned for retirement, and enduring an increased level of deaths among family and friends.

Father Rose added that older people are more likely to be living alone and therefore surrounded by more silence and solitude. Yet he said we can achieve serenity in the face of such challenges by feeling God’s presence through prayer. Also helping toward a more serene life, he remarked, is an avoidance of excessive negativity either in social circles or from watching the news. Rather, Father Rose vouches for thoughts and actions that will bring about more positivity. Using volunteerism as an example, he acknowledged that the coronavirus pandemic has forced in-person visits to be drastically reduced, but it’s still quite possible to ease loneliness among fellow senior citizens by connecting via telephone.

“There’s no reason you couldn’t call the parish office and find out who lives alone, who’s sick, and give them a call. And that means the world to them, that someone is thinking of them and cares for them,” he said.