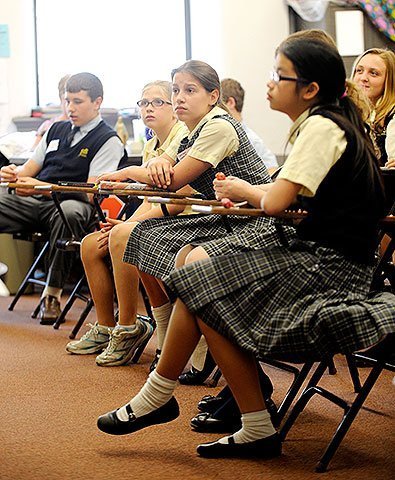 This school year, students at St. Mary School in Canandaigua have beendivided into five groups, called houses. Above, students listen to theirteacher as they sit in class in June.

When middle-school students arrived at St. Mary School in Canandaigua for the first day of school in September, they expected to get new textbooks, meet their new teachers and go over classroom rules.

Instead, they were whisked away to Notre Dame Retreat House for the start of a brand-new adventure reminiscent of something out of a Harry Potter novel.

The 61 students were divided into five groups, called houses, then charged with choosing patron saints for their houses. After the students chose to name their houses after St. Francis of Assisi, St. Peter, St. Theresa of Avila, St. Patrick and Blessed Pope John Paul II, they went about creating mottos, symbols and cheers for each house.

"It was a wonderful start to the year," said Linda Moll, English language arts and seventh-grade homeroom teacher.

Moll also is the teacher mentor for St. Patrick House, which, like the other four houses, comprises sixth-, seventh- and eighth-graders. Two eighth-graders from each house were chosen to be house leaders, and these 10 students gather together once a week during their lunch period for planning meetings. They meet with the rest of their houses later in the week during first period and fill their fellow students in on what was discussed and decided at the leaders’ meetings.

For many of the students, their only previous exposure to such a house system came from the Harry Potter books, where students at Hogwarts School of Witchcraft and Wizardry are sorted into four houses. There are some similarities between the fictional system and the houses at St. Mary, but there are quite a few differences as well, Moll said.

"Like any good Catholic taking over a pagan idea, we put our own particular identity, our own spiritual take on it," she said.

The impetus for the creation of the house system at St. Mary, however, did not come from a children’s fantasy novel. Instead, it came from an educators’ workshop Principal Ann Marie Deutsch attended, Moll said. A school in Kansas had successfully implemented the house system, and representatives gave a presentation on the benefits it had yielded at their school.

"She thought this could be something we could adopt to promote student leadership roles and work on different qualities to develop," added Jean Mercandetti, who coordinates the house program along with fourth-grade teacher Meghann McCarthy. "It aims to empower the sixth-, seventh- and eighth-graders for leadership and to step up and promote more relationships among the students."

So far the program is doing just that, said Mac Reston, an eighth-grader and a leader of St. Theresa of Avila House. Even though there are students from three different grades in each house, the students all band together as a house and work toward common goals, he said.

"Now I’m walking down the hall and there are kids in sixth grade who I never would have talked to before. Now that we’re in the same house, I say hi to them and I ask them how they’re doing," Mac added.

"I really like how it kind of creates a bond between everyone from the sixth grade to the eighth grade. It kind of gets us all together," added Catie Keck, an eighth-grader and a leader of St. Patrick House. "It’s a lot of fun and you definitely get to expand who you interact with."

Catie, Mac and the other eight house leaders were chosen by the middle-school teachers because they displayed leadership qualities, such as the ability to run a meeting and the ability to effectively communicate with the other members of their houses and represent them at leaders’ meetings, Moll said. The house program replaced St. Mary’s former student leadership council, which had been for eighth-graders chosen by their homeroom teachers. This new alternative gives all the middle-school students a chance to be involved, rather than just selected eighth-graders, she added. All the members of the houses are able to make suggestions at house meetings, and then their representatives take those ideas back to the leaders’ meetings.

The house system has already produced good results, according to Moll and Mercandetti. During a brainstorming session, the house members and their student leaders decided to mark October, which is observed as Respect Life Month, with a schoolwide Day of Service on Oct. 26. That day, groups of students went out into the community and helped out at a soup kitchen, a food pantry and a medical adult day program, while other groups of students helped out in various ways at the school.

"It’s really a great opportunity for them to develop their leadership skills because they really have to think deeply about how to coordinate all these great ideas," Moll said. "Kids this age … are always feeling that they don’t have a say in their own lives. They’re just getting to the place developmentally where they want to have a say in their lives. I think they’re really excited about it."