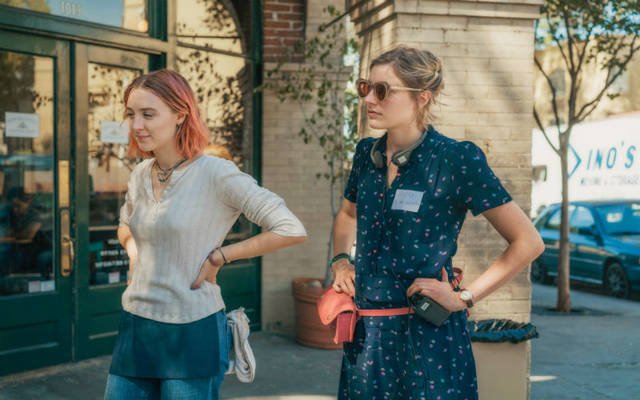 Her recounting of the way she tested her boundaries with both her family and her parochial school is pleasing in some respects but teeth-grating in a couple of others.

As a result, some of its content, particularly a sexual encounter in which the title character is a bit shy of her 18th birthday, necessitates a restrictive classification. The scene is not lurid, but that’s the point Gerwig is making: Nothing this girl does as she explores her limits as a daughter and student, however misguided, is capable of shocking anyone except herself.

This is particularly true at the all-girls parochial school Christine McPherson (Saoirse Ronan) — who insists that everyone call her Lady Bird — attends. It’s headed by the compassionate, good-humored Sister Sarah Joan (Lois Smith), who tries to help Christine identify her talents.

When Sister Sarah Joan suggests Lady Bird has “a performative streak,” she lands a part in the school musical and thinks she’s found a caring boyfriend in fellow actor Danny O’Neill (Lucas Hedges). But their relationship ends abruptly when, in another uncomfortable passage of the film, she sees him kissing another boy at the cast party.

She then pursues Kyle Scheible (Timothee Chalamet) all the way to a discreetly handled carnal moment that does not conclude the way Christine was expecting it to.

It’s 2002, and Lady Bird is eager to get out of her dull hometown, which she compares to “the Midwest of California.” And she hasn’t set her sights on the kind of state-subsidized university her cash-strapped family can afford, aiming instead at somewhere she imagines will be more cultured.

Even then, Sister Sarah Joan is onto her, though. Reading one of her college-application essays, she remarks, “It’s clear how much you love Sacramento.”

To this, the nun asks, “Don’t you think they’re the same thing?”

Lady Bird isn’t rebellious enough to roll her skirt, but she enjoys exploring taboos. She nonchalantly snacks on Communion wafers, for instance, while gossiping with a friend in the back room of a chapel. When another student expresses understandable shock, Lady Bird assures her that the hosts are unconsecrated.

But Immaculate Heart High School does have a nonnegotiable code of deportment. So when Lady Bird interrupts a pro-life lecture with “Just because something is ugly doesn’t mean it’s morally wrong,” she earns a brief suspension. The point isn’t explored further. This is depicted as just another expression of Lady Bird’s adolescent — and, so the script’s tone suggests, largely unjustified — discontent.

Gerwig herself is not Catholic but attended a Catholic high school, and Lady Bird, although it’s not made explicit, is in the same situation. She’s not rebelling against church teachings, though, as much as life in general and her place in it.

Lady Bird’s mother, the perpetually stressed Marion (Laurie Metcalf), with whom she bickers, works double shifts as a psychiatric nurse because husband Larry (Tracy Letts) is out of work.

Gerwig takes care to show that Lady Bird is capable of rapid emotional shifts while willing to accept her mother’s point of view. She ends one argument with Marion early in the film by hurling herself out the of the car they’re driving in. Later, she stops another by cooing over a prom dress at a thrift store.

It’s no spoiler to point out that the movie’s conclusion, during which Lady Bird has finally achieved her dream of college in New York, shows a very strong old-school moral compass at work. It’s a redeeming wrap-up. But the problematic material that precedes it requires thoughtful discernment by grown viewers well-grounded in their faith.