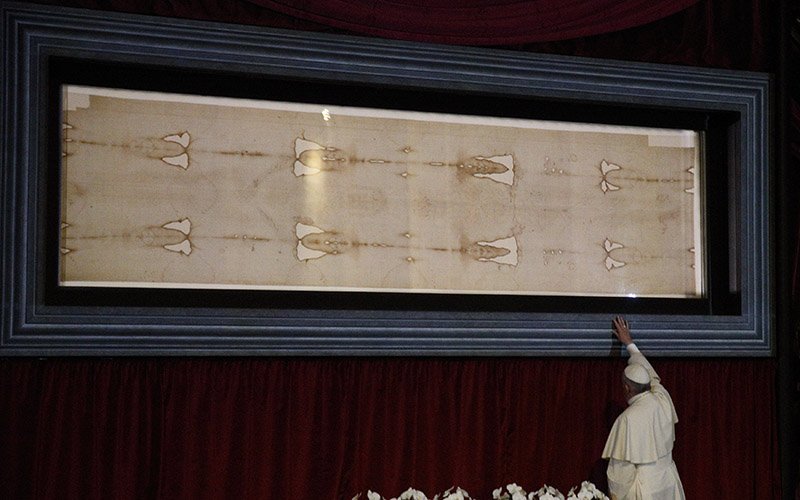 Pope Francis touches the case holding the Shroud of Turin after praying before the cloth in 2015 at the Cathedral of St. John the Baptist in Turin, Italy. (CNS photo by Paul Haring)

ROME (CNS) — Tens of thousands of young Christians from across Europe were expected to see in the New Year with chants and silent prayer, including before the Shroud of Turin. But the Dec. 28-Jan. 1 Taize pilgrimage to Turin has been postponed because of the COVID-19 pandemic.

Marco Bonatti, who runs the official shroud website for the Archdiocese of Turin, confirmed Aug. 13 that with the postponement of the Taize pilgrimage, the extraordinary display of the shroud also was postponed.

Archbishop Cesare Nosiglia of Turin, other Christian leaders in the city and the France-based Taize ecumencial community announced Aug. 12 that the pilgrimage would be postponed to December 2021.

It will be the first time since the New Year pilgrimage began in 1978 that the event was not held. In recent years, depending on the city chosen to host the European event, between 10,000 and 45,000 Christians aged 16-35 would gather for fellowship and, especially, the distinctive Taize prayer, which mixes Bible readings and long periods of absolute silence with simple songs using phrases from the Psalms repeated over and over.

The Archdiocese of Turin and the local Waldensian, Baptist, Romanian Orthodox, Lutheran and Adventist churches began planning the event in 2017. And the archdiocese, which is the custodian of the shroud, announced in January that it would include a special display of the shroud just for pilgrimage participants.

The 14-foot-by-4-foot linen shroud has a full-length photonegative image of a man, front and back, bearing signs of wounds that correspond to the Gospel accounts of the torture Jesus endured in his passion and death. The Catholic Church has not recognized it officially as the burial cloth of Christ, but recent popes have referred to it as an “icon” of Jesus.

Kept in a metal case in a chapel in the Turin cathedral, the shroud is put on public display only occasionally. The last public exhibition was in 2015, but in April Archbishop Nosiglia led a livestreamed prayer service in front of the shroud as part of a Holy Saturday prayer for an end to the coronavirus pandemic.

Announcing the postponement of the Taize gathering, the Archdiocese of Turin said, “Uncertainty about the possibility of contagion, now and in the coming months, is an important element, but not the only one” influencing a decision to move the event back one year.

The pilgrimage “must take place in conditions of serenity and security for all,” including the thousands of families in Turin and throughout the Piedmont region who were going to host pilgrims, the statement said. One more year of preparation will allow that to happen