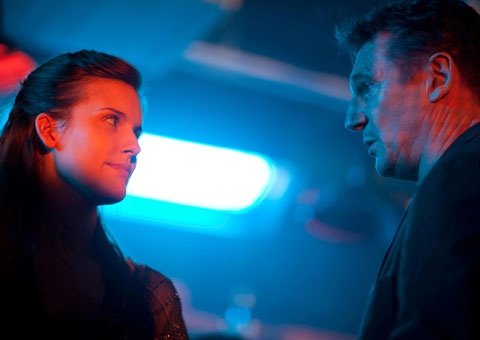 NEW YORK (CNS) — Liam Neeson scowls his way through the sour sequel "Taken 2" (Fox). Moviegoers may find themselves displaying a similar expression should they choose to spend a long 90 minutes watching Neeson tangle with — and inevitably best — one anonymous heavy after another.

This time out, Neeson’s Bryan Mills — a retired CIA agent short of fuse but long on mad fighting skills — is up against the machinations of a grudge-bearing Albanian by the name of Murad (Rade Sherbedgia). Murad is out for revenge because Bryan killed his son, the principal baddie of the first installment of the franchise.

Never having been exposed to the civilizing influences of Walmart and the Olive Garden, poor benighted Murad, who’s not only Eastern European but a Muslim to boot, fails to understand that junior had his torturous death at Bryan’s hands coming. So he hatches a plot to kidnap Bryan, Bryan’s ex-wife, Lenore (Famke Janssen), and their teen daughter Kim (Maggie Grace).

Since Kim’s previous abduction by Murad’s pride and joy — a serial human trafficker — provided the premise of the earlier go-round, perhaps she should contact Lloyd’s of London at this point and see if they don’t offer an insurance policy for this sort of thing.

The perfunctory setup we witness before Murad springs his trap includes a nod or two in the direction of family togetherness and hints at a possible reconciliation for Bryan and Lenore. But, given that Bryan’s methods of paternal protectiveness resemble those of a Mafia don, the emotions expressed on the way to his killing spree ring hollow.

In reality, mayhem for its own sake seems to be the driving principle behind director Olivier Megaton’s otherwise largely pointless shoot-em-up.

The film contains frequent, sometimes gory violence, including beatings and torture, brief premarital sensuality, at least one use of profanity and occasional crude language. The Catholic News Service classification is A-III — adults. The Motion Picture Association of America rating is PG-13 — parents strongly cautioned. Some material may be inappropriate for children under 13.