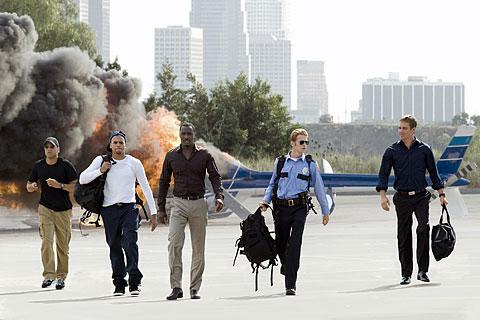 NEW YORK (CNS) — There’s a moral center to "Takers" (Screen Gems), or so at least its creators would have you believe. It doesn’t quite come off that way, and this crime thriller is ultimately a tired exercise in gunfire, explosions and insipid dialogue.

After each elaborately planned job, in which they’re always several steps ahead of the authorities, they seek nothing more than expensive suits, cigars, cognac, overseas bank accounts and women. But they’re still portrayed as somewhat moral — sophisticated good-time guys who take care of their relatives — and are much more appealing than the other criminals with whom they sometimes collaborate. How these guys even found each other in the first place, though, is never explained.

Then, Ghost (Tip "T.I." Harris) — the only member of the crew who was shot during an earlier job and imprisoned — turns up, having served his term. He’s embittered, has connections to Russian mobsters, and has a plan the Russkies devised for the highly engineered robbery of an armored truck. The rest of the film hinges on whether the fast-talking Ghost can be trusted, and how many of the gang members will survive.

Matt Dillon plays grumpy Los Angeles detective Jack Welles, who is always the requisite pace behind when the explosions occur, even as he deals with a boatload of his own torment.

It all adds up to the distressing formula: Two exciting chase sequences; speaker-rattling gunfire; suits by Armani; script by International House of Cliche.

The film contains constant stylized gun violence and an instance of male rear nudity, as well as pervasive crude and fleeting profane and crass language. The Catholic News Service classification is A-III — adults. The Motion Picture Association of America rating is PG-13 — parents strongly cautioned. Some material may be inappropriate for children under 13.