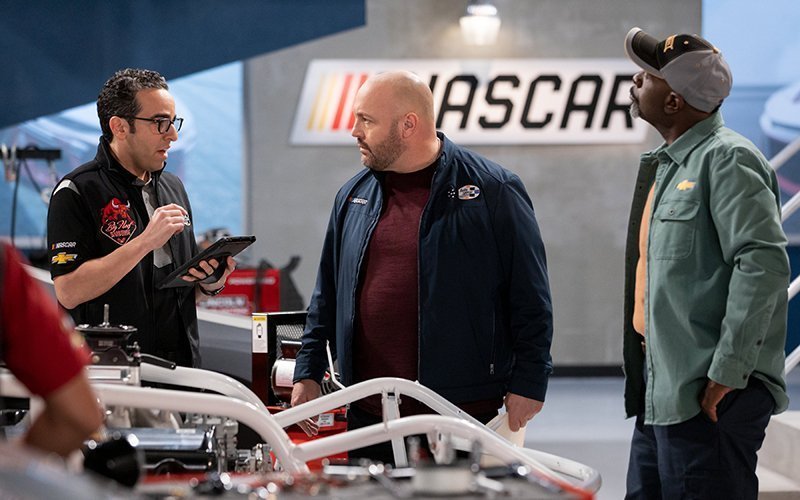 This is a scene from the TV show "The Crew" starring Kevin James streaming on Netflix. (CNS photo by Eric Liebowitz/Netflix)

NEW YORK (CNS) — Familiar faces return to the small screen this month in a trio of new situational comedies.

Fans of practicing Catholic Kevin James’ persona as a put-upon but lovable Everyman will not be disappointed by the premise of his new show, set in the world of NASCAR. James stars as Kevin Gibson, head of the fictional Bobby Spencer Racing Team. Kevin dreams of fame and fortune, perhaps even including victory at the Daytona 500 one day. But his well-laid plans are disrupted when the squad’s eponymous owner (Bruce McGill) announces his retirement and hands the reins to his brassy daughter, Catherine (Jillian Mueller). As Catherine tries to introduce new ideas and efficiencies, she locks horns with Kevin (“I have underwear older than her!”) and his gaggle of colleagues, including sidekick Beth (Sarah Stiles) and nitwit driver Jake (Freddie Stroma). As a sports-themed comedy, “The Crew” resembles “Ted Lasso” on Apple TV+ but with more slapstick and shtick. Based on the five episodes reviewed, occasional salty language and mild innuendo make this lackluster series fit for adult viewers only.

This unusual sitcom could easily garner awards both for originality and narcissism. Dwayne Johnson — known as “The Rock” during his days in the ring — stars as himself as he makes a run for president of the United States in the year 2032. He sits down with actor-turned-eager-reporter Randall Park and recounts his life story, narrating episodes of his unorthodox childhood seen in flashback. His father, Rocky (Joseph Lee Anderson), was a pro wrestler struggling to make ends meet, to the exasperation of his mother, Ata (Stacey Leilua). “Young Rock” is portrayed at age 10 (Adrian Groulx), age 15 (Bradley Constant) and as a student at the University of Miami (Uli Latukefu). Teen Rock nearly goes off the rails as a ne’er-do-well and chronic shoplifter, tendencies his older self explains away with the comment, “No one’s perfect and we all make mistakes.” So-called life lessons aside, those who remember the glory days of what was then called the WWF will appreciate the colorful athletes who pop in and out of the Johnson household, including Andre the Giant (Matthew Willig), the Iron Sheik (Brett Azar) and Junkyard Dog (Nate Jackson). Parents may be less appreciative of the crass language and suggestive dialogue that sometimes crop up in the first three installments of this offbeat — but not especially funny — program.

With a formula aimed at mixing laughter and pathos in equal parts, this show follows newly widowed Kenan Williams (Kenan Thompson) as he juggles single parenthood with a high-profile job as co-host of “Wake Up with Kenan,” a morning TV show in Atlanta. Both home and office are over-stuffed with characters offering advice at every turn, from his precocious young daughters, Aubrey and Birdie (played by real-life sisters Dani and Dannah Lane), to his sassy brother Gary (Chris Redd). Then there’s his father-in-law, Rick (Don Johnson), a one-time saxophone player and surfer dude who failed as a dad and wants a second chance to succeed as a grandfather. At work, Rick relies on Mika (Kimrie Lewis), his executive producer and likely love interest, to help him maneuver amid the frenetic atmosphere. As only the first episode was available for review, it’s difficult to assess how family-friendly this mediocre series will be. “Good morning, Atlanta! I don’t care who you slept with as long as you wake up with Kenan,” the anchor proclaims. To which his supposedly ditzy confrere, Tami (Taylor Louderman), counters, “I also don’t care who you slept with, as long as you’re married!” Indeed.