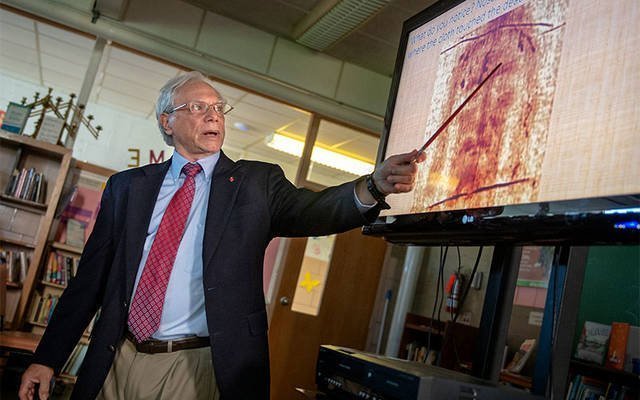 Frank Netti gave an hour-long presentation on the Shroud of Turin April 22 at the St. Francis and St. Clare Parish Ministry Center in Waterloo. (Courier photo by Jeff Witherow)

He does this by visiting area parishes and giving presentations about topics of interest to Catholics. He traveled to Clyde May 19 to give his presentation about eucharistic miracles to members of St. Joseph the Worker Parish, and on April 22, approximately 60 members of St. Francis and St. Clare Parish in Waterloo and Seneca Falls turned out for his presentation about the Shroud of Turin, which is believed to be the cloth in which Jesus was buried after his crucifixion.

“I find that my purpose here is to strengthen people’s faith, because you’re talking about Jesus Christ,” Netti said of his presentations. “Whether it’s the eucharistic miracles or the Shroud of Turin, people are reminded that these are signs of Christ’s presence on earth.”

Netti, who belongs to Holy Family Parish in Auburn, said he began putting these presentations together because he was looking for a way to take the skills he’d acquired throughout his nearly 40-year career and put them to use in service of his church. Over the years, he’d become adept at creating presentations and using them to offer financial advice to prospective clients, he told the Catholic Courier.

“I just turned that kind of talent into something I could use for the church,” Netti said.

Netti typically spends at least six months preparing a presentation, he said, noting that the shroud presentation took eight months of work. He read every book and article he could find about the shroud, starting with Mark Antonacci’s Resurrection of the Shroud: New Scientific, Medical and Archaeological Evidence. From there, he moved on to works written by members of the Shroud of Turin Research Team, which was a group of 32 established nuclear physicists, forensic pathologists and other scientists, as well as several photographers.

“They were the top scientists and forensic people in the country, with state-of-the-art photographic and computer equipment at their disposal. They were the team that said, ‘We’re going to prove that this is not a relic. It’s a fake, it’s a forgery,’” Netti said.

After performing extensive testing on the shroud in the late 1970s, however, the team was not able to prove that hypothesis, Netti added.

“When they returned to the U.S., they spent many months analyzing their 5,000 photographs. They came to the conclusion that ‚Ä¶ it was not a painting. They had a list of like 10 different points of what the shroud was not. ‚Ä¶ I read their studies and their works and found it’s really fascinating,” he said.

“People are more interested today than ever before because the science has evolved,” Netti said.

The people who come to Netti’s presentations about the shroud are particularly interested in the scientific evidence that seems to prove the shroud’s authenticity, he said. Some have walked into his presentations as skeptics and left believing that the shroud is truly the cloth in which Jesus was buried.

“People say, ‘You gave me the chills.’ I said something that really moves them. There have been other people who have come to the conclusion that they have seen something that taught them a lot about Christ and his presence on earth,” Netti said.

The process of researching both the shroud and various eucharistic miracles and of presenting them to others has had a dramatic affect on Netti’s own faith, he added.

“The more I research any of these topics, the more convinced I am that what they claim to be, they actually are,” Netti said.

EDITOR’S NOTE: For more information on Netti and his presentations, contact him at 315-246-7021 or frank.netti.49@gmail.com.