Talks presented around the diocese focus on the Eucharist - Catholic Courier 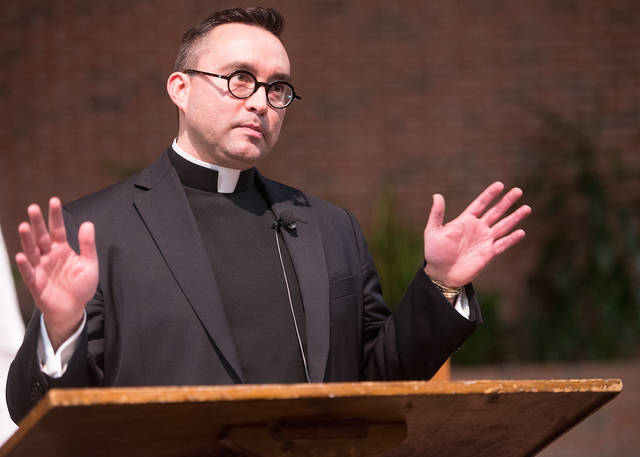 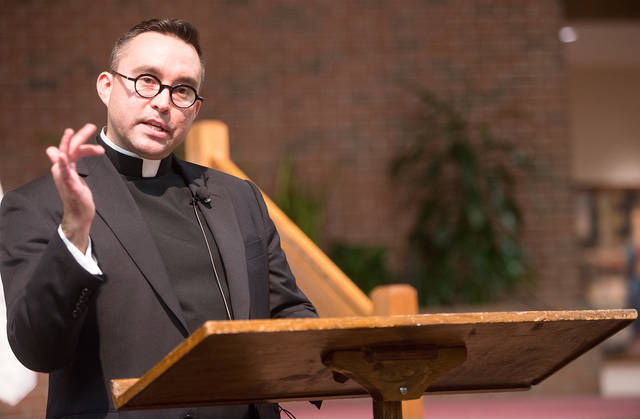 That’s one of the messages Father Matthew Jones sought to impart to the dozens of people who’d gathered inside St. Lawrence Church Jan. 23 to hear him talk about the Eucharist as the bread of angels. Father Jones’ presentation was one of several planned by St. Bernard’s School of Theology and Ministry in commemoration of the current Year of the Eucharist, which Bishop Salvatore R. Matano has declared will be observed in the Diocese of Rochester from June 2017 through June 2018 in conjunction with the diocese’s 150th anniversary.

The phrase “bread of angels” originally was used in the Old Testament to describe the manna God gave to the Israelites during their journey through the desert, said Father Jones, parochial vicar at St. Mary, St. Boniface and Blessed Sacrament parishes in Rochester.

According to the Old Testament Book of Wisdom, God nourished his people with “food of angels and furnished them bread from heaven.”

Manna is described again in Psalms 78, which reads in part, “God rained manna upon them for food: grain from heaven he gave them. Man ate the bread of the angels; food he sent in abundance.”

“The fact that manna was a prefigure of the Eucharist in the Old Testament indicates that this title was given to manna in the Old Testament and fittingly applied to the Blessed Sacrament in the New Testament,” explained Father Jones, who also is co-director of priesthood vocation awareness for the Diocese of Rochester.

Some of what Catholics know and believe about the Eucharist is derived from tradition rather than Scripture, Father Jones added. In his writings, for example, St. Augustine makes it clear that humans and angels are nourished by the same food in different ways, and that we could not be nourished except by means of the word becoming flesh, he said.

“St. Augustine says the angels according to their nature feed spiritually upon this supernatural nourishment which comes from the incarnation of Christ, whereas we ‚Ä¶ feed on this same grace through the sacraments,” he said. “This is why we can call, and it is proper to call, the Blessed Sacrament the bread of the angels.”

Father Jones will give his presentation on the Eucharist again on March 5 at 7 p.m. at St. Leo Church, 167 Lake Ave., Hilton. The talk will be preceded by a 5:30 p.m. Mass and a soup supper.

More Year of the Eucharist presentations are planned. They are:

‚Ä¢ “The Holy Sacrifice” — March 4 at 7 p.m. at Immaculate Heart of Mary Church, 115 E. High St., Corning. Father George Heyman will help participants understand the nature of the sacrifice of the Mass and the difference between Catholic and non-Catholic understandings of the Eucharist.

‚Ä¢ “The Breaking of Bread” — March 5 at 7 p.m. at Immaculate Heart of Mary and again March 7 at 7 p.m. at St. Leo Church. Father Peter Van Lieshout will help participants understand the radical healing brought about by the Eucharist.

‚Ä¢ “Holy Communion” — March 6 at 7 p.m. at St. Leo Church. Father Peter Mottola will help participants understand the nature of Holy Communion itself and be able to explain it to their Catholic and non-Catholic friends .

‚Ä¢ “The Bread of Life” — April 5 at 7:15 p.m. at St. Mark Church, 54 Kuhn Road, Greece. Father David Tedesche will focus on the witness of Jesus to become bread for all and what the gift of eternal life promises for believers.

For further information about the series or any of the individual presentations, contact the host parishes or St. Bernard’s School of Theology and Ministry at 585-271-3657.