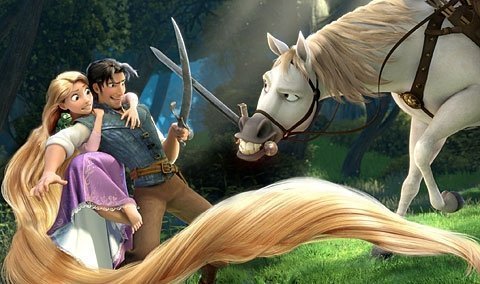 Largely irony-free and lacking the snarky quality of many movies aimed at kids, "Tangled" (Disney) is a throwback Uncle Walt would recognize and applaud. So will families.

Fortunately, that doesn’t mean it’s static or staid. Enough contemporary touches, in addition to computer-generated animation (projected in your choice of 3-D or 2-D), ensure "Tangled" is an equally dynamic and wholesome vehicle for its "love conquers all" theme.

Following the outlines of the German folk tale Rapunzel, popularized by the Brothers Grimm, the plot is a melange of elements recognizable from "Snow White," "Cinderella" and "Sleeping Beauty." The influence of the "Shrek" franchise is also discernible, without any adverse effects.

A child born to a king and queen possesses golden locks with healing properties, magic for which the infant is kidnapped by the evil crone Mother Gothel (voice of Donna Murphy). In a secluded tower, Gothel raises Rapunzel (voice of Mandy Moore) as her daughter, using her captive’s hair to restore her own youth while never letting the girl step outside her prison.

On the eve of her 18th birthday, Rapunzel, though unaware of her true identity, is desperate to escape so she might experience a display of floating lanterns that her parents stage every year to commemorate their lost princess.

Adopting the guise of an overprotective parent, Gothel refuses. But then a boastful young thief, Flynn Rider (voice of Zachary Levi), chances upon the tower after robbing the palace.

With the help of her versatile mane, Rapunzel persuades him to accompany her into the world she’s never known and has been taught to fear. Accompanied by Rapunzel’s pet chameleon, Pascal, they’re chased by Maximus, a zealous horse of the Imperial Guard, as well as Gothel and two of Flynn’s roughneck accomplices whom he double-crossed.

After a slow start, directors Nathan Greno and Byron Howard blend lighthearted romance, vigorous action sequences, and a few rather tepid songs by veteran composer Alan Menken into a pleasant whole. The film’s merely serviceable voice work and visuals may keep it from the ranks of animated classics, but the overall package is a good introduction to the Disney formula.

Keeping up with the times, the filmmakers tweak the damsel-in-distress motif by having Rapunzel save Flynn more often than the reverse.

Still, they remain true to the most vital, enduring values by equating romantic love with self-sacrifice, free of any tawdry distractions. Rapunzel and Flynn don’t kiss until they’re married and the movie’s edgiest bit involves a drunken, superannuated cherub winking at Mother Gothel.

But, along with mild swashbuckling violence, the film does include many slapstick pratfalls and cartoon ouches courtesy of our frying-pan- and hair-wielding heroine. Since sun worship seems to be the prevailing cult in Rapunzel’s fictional realm, moreover, there’s a distinct but inoffensive pagan undertone to the proceedings.

Finally, those shepherding preschoolers should anticipate a few tears during a potentially upsetting climactic scene. Rest assured, however, that a happily-ever-after wrap-up is quickly forthcoming.

The potential of that earlier brief interlude to elicit such strong emotional reactions is proof of the degree to which "Tangled" succeeds.