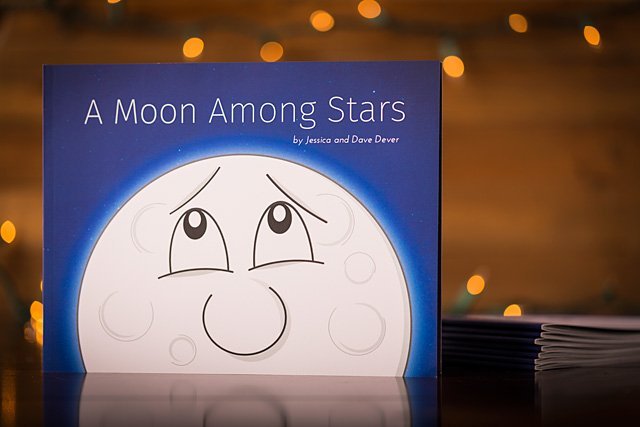 Several years ago, when she was a graduate student pursuing a degree in education from St. John Fisher College, Jessica Dever wrote a children’s book as part of one of her assignments. She never imagined, as she was putting that homemade book together, that she’d one day be reading it to students in her own classroom.

Fast forward to the present day, and not only has Dever read a more polished version of the book to her students, but her husband, Dave Dever, also worked with her to create that updated version of the book. Jessica Dever wrote the text while Dave Dever created illustrations to accompany her words, and the A Moon Among Stars was published in November 2016 by Lanier Press.

"Honestly we never thought we would create a book. Once the assignment came and went we started to think about the possibilities," said Jessica Dever, preschool teacher at St. Louis School in Pittsford.

A Moon Among Stars is recommended for children between the ages of 4 and 7 and teaches them about self-worth as well as such science concepts as lunar phases. It tells the story of a moon who begins to believe that everyone likes the sun better than him and decides to quit his night-shift job. A group of nocturnal creatures help their friend the moon realize he is special, unique and valued in his own way.

"A Moon Among Stars is a great entry-level science book, and at the same time it works as a lesson in self-worth," according to The Children’s Book Review.

In its original form, the book was similar to a scrapbook, as she created it using scrapbook paper, construction paper and clip art from the Internet, Jessica Dever said. Dave Dever, who co-owns a multipurpose creative production house called Revel Pix, used that original book as a model and created new illustrations using computer programs he uses everyday at work, his wife noted.

"I wrote the book in my free time, Dave dabbled in the illustrations when he had time. The book really started to come to life when Dave began to develop his take on each page. Then we would review each completed page together and become more excited about where it was going," she added.

The spouses worked together to hammer out all the details related to the publishing process, such as making decisions on website design and a release date for the book.

"I think we are a good team, and we had fun in the process," Jessica Dever said. "We are fairly creative people, and this was another exciting outlet for us to create something new and different from our traditional scope of work."

Jessica Dever has read the book to the 3-year-old students in her classroom at St. Louis and said they loved hearing about the moon and the nocturnal creatures, even though some of the concepts were a bit over their heads. The students’ parents have been very supportive and even threw a classroom party for the Devers in November when the book was published.

"My favorite thing is getting e-mails from former students’ parents whose child understands it and can’t sleep without the book by their side," she added.

The positive response the book has received has encouraged the Devers to collaborate on another project, and they already have begun to brainstorm ideas for their next children’s book. In the meantime, the couple hopes the children who read A Moon Among Stars will be inspired to learn more about the moon and other science concepts, and will learn that each of them are special and unique as well.

"We worked very hard on it and hope parents and children enjoy the experience of reading A Moon Among Stars together and in turn, take something from it, whether it’s a lesson in self-worth or something they didn’t know about the moon," Jessica Dever said. "Any conversation started from the book between parents and their children is a meaningful one."

EDITOR’S NOTE: A Moon Among Stars is available for purchase on Amazon or at amoonamongstars.com.