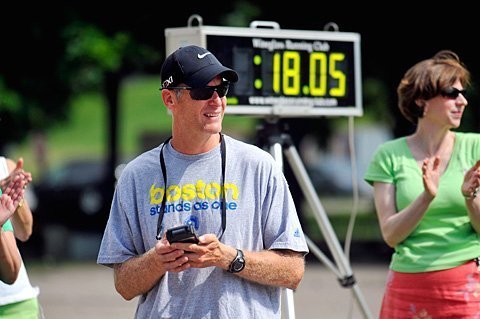 Tom Ketchum, physical education teacher at All Saints Academy in Corning, mans the timing station at the finish line of theRunning of the Saints 5K June 1 in Painted Post.

Having trouble motivating your kids to exercise? Tom Ketchum’s got a sure-fire solution: lead by example, walk the talk.

A few years back, after Ketchum dedicated himself to getting in shape, he dropped 90 pounds off his 285-pound frame — mostly through running — over an eight-month period. The slimming down was obvious to students at Corning’s All Saints Academy, where he teaches physical education and health. From there, it took less arm-twisting by Ketchum to get his classes on board with fitness as well.

"He showed us that if he could do it, we could do it," said Michael Woglom, 14, who graduated from All Saints in June.

Fitness has become such a focus at All Saints that the school distinguished itself as four-time state champion in the President’s Challenge, a national initiative of the President’s Council on Physical Fitness and Sports. All Saints earned the honor in 2008-09 through 2011-12 by having the highest percentage of students in its statewide enrollment division to earn the Presidential Physical Fitness Award. The achievement is based on physical excellence in five areas: flexibility, shuttle run (lateral sprint), endurance running and walking, pull-ups and sit-ups.

"It’s harder than it actually looks. You really have to work at it," said Gretchen Savoy, 14, another recent All Saints graduate, who earned the award in seventh grade and this past year in eighth grade. Michael, meanwhile, captured the honor in fifth, sixth and eighth grades.

All Saints may well have added to its four-year streak as the state’s top school, but the award was discontinued after 2011-12. However, the individual Presidential Physical Fitness Award continues; Ketchum noted that All Saints had 25 such winners in 2012-13, up five students from the year before.

Ketchum, 41, has worked full time at All Saints since 1997. A native of Immaculate Heart of Mary Parish in Painted Post, he was a standout three-sport athlete at Corning West High School. The SUNY Cortland graduate has stayed connected to athletics over the years through coaching at local schools and his position at All Saints.

"I think this was what God intended me to do," he said of his long tenure at the Catholic school.

Although a serious car accident shortly after high-school graduation diminished some of his athletic ability, Ketchum has become an avid runner. He currently runs about 55 miles a week, and beginning in 2010 he has started and finished four marathons — three Wineglass Marathons in Corning, and the famed Boston Marathon this past April 15 that garnered international headlines for the wrong reasons.

Ketchum posted a time of 3 hours, 10 minutes and 37 seconds in Boston. According to official statistics, this put him in 3,852th place out of the 23,342 runners who began the race, placing him in the top 17 percent. Despite being exhausted by the grueling course, he called it "the most enjoyable run I’ve ever had. It was 26 miles of giving fans high-fives, rows and rows of them. That kept me going."

But at approximately 2:50 p.m., two bombs detonated near the finish line. The blasts, which law authorities later attributed to two Chechen brothers with extremist political beliefs, killed three people and injured more than 250, many severely.

The race was immediately ended. Ketchum — who was already on his way out of town, having crossed the finish line more than an hour earlier — said he not only felt badly for the victims but also the thousands of competitors who were prevented from finishing after investing considerable sweat and toil. He said he hadn’t originally planned to run another Boston Marathon, but in light of the tragedy he now expects to compete in 2014 as a tribute.

"I think next year will be unbelievable," he said. "I don’t think anybody will be afraid (of violence). I know I won’t be afraid."

In the meantime, Ketchum is keeping busy with local involvement in his favorite activity. On the home front he enjoys running with his wife, Kristen, and daughters Brynne, 12, and Faithe, 9 (he also has a 4-year-old son). In addition, he and Kristen organized the second-annual Running of the Saints this past June 1. The 5-kilometer run and walk, which started and finished at Craig Park in Painted Post, serves as a fundraiser for All Saints Academy.

As a new school year begins shortly, Ketchum is sure to be rolling out his bag of tricks for keeping All Saints students in shape. In the past he has introduced such incentives as walking as many miles as possible over a few months’ time and tracking the amount of hours spent on fitness. His classes have included fitness obstacle courses as well as "sweat tests" to determine who’s exerted themselves the most, and he often has youngsters run sprints after class. Several All Saints students also have joined a local running club that he helps coach.

Ketchum said the youths enjoy exercising together and supporting one another.

"They’re such great kids," he remarked.

Although his passion for running is infectious, Ketchum acknowledged that it’s not for everybody — but, even so, he implores young people to engage in some sort of exercise to ensure better health.

"If you can’t run, just stay active — swimming, hiking, bike-riding, walking with your parents," he suggested.

He also advocates strongly for physical challenges because, as he puts it, "Fitness builds character because it’s very hard to do." He added that this character development helps form a lifelong work ethic.

"You might not like athletics or sports, and that’s fine, but there’s something out there in math or science, or maybe being a doctor or lawyer, and you can’t wish to do that," Ketchum said. "You have to work at it."