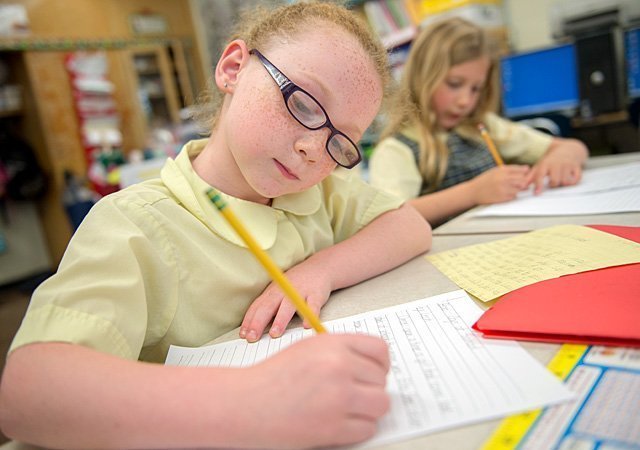 Leah Batterson (left), a second-grader at St. Mary School in Canandaigua, works on a writing assignment in Suzanne Pohorence’s class June 12. Pohorence was among 32 teachers helping to create a new curriculum for the Diocese of Rochester’s Catholic schools.

When classes at St. Mary School in Canandaigua let out in late June, second-grade teacher Suzanne Pohorence was still hard at work on a special project that was due July 31.

Pohorence is one of 32 teachers who spent three months developing a new curriculum for the 20 Catholic elementary and junior-high schools in the Diocese of Rochester.

"We haven’t had an updated curriculum for a while," Pohorence said. "It was time for us to upgrade so we could show the world we’re not just stuck in the old ways."

Working in teams of two or three teachers per grade level, she and 31 others drew upon past experiences and favorite resources to put together a curriculum that addresses current learning standards and incorporates the Catholic faith in every subject area. Each team was to develop comprehensive course and unit overviews for its specific grade level, and submit that curriculum to the diocesan Department of Catholic Schools for review by the end of July. Teachers from throughout the diocese will discuss the new curriculum package in October at their annual Superintendent’s Day conference, but it will not be finalized until the spring of 2015, according to Anthony S. Cook III, superintendent of diocesan schools.

"It will never be really done," Cook said, noting that curriculum should be constantly changing to adapt to the demands and needs of our ever-changing society.

Although the diocesan schools’ curriculum has been tweaked regularly to reflect current standards, Cook said the curriculum was due for an overhaul because it hadn’t been completely revamped since around the late 1990s. Quite a few changes have occurred in education since then, especially in the last few years, noted Paula Smith, principal and fifth-grade teacher at St. Patrick School in Owego and a member of the 32-member team charged with rewriting the diocesan curriculum.

"The current guidelines we have from the diocese now are outdated, as the Common Core has come along and the New York state standards have changed," Smith said.

Smith’s comment refers to the Common Core State Standards, a set of learning standards developed in 2009 by the National Governors Association and the Council of Chief State School Officers. Individual states are free to decide whether they want to adopt these standards, although when awarding federal grants, the government gave competitive advantage to states that adopted the standards. Most states have adopted them, including New York, which began rolling them out in 2010, with ongoing implementation in the state’s public schools.

"The Common Core State Standards are a set of high-quality academic expectations that all students should master by the end of each grade level," the National Catholic Educational Association stated in a May 2013 position paper. "The standards establish consistent learning goals for all students that focus on preparing them to succeed in college and careers in a globally competitive workplace. The standards define and clearly communicate grade-specific goals and inform parents about learning outcomes."

In 2011 the New York State Department of Education adopted the P-12 Common Core Learning Standards, which comprise the Common Core State Standards as well as additional standards unique to this state. Private schools, including Catholic schools, are not obligated to adopt either set of standards, but diocesan schools have been using them as a minimum benchmark, said Jeffrey M. Green, who served through June as associate superintendent of diocesan Catholic schools.

"The standards themselves are excellent. They set high expectations for students," Cook said.

However, reaction has been mixed to implementation of the Common Core State Standards in New York and other states. In an April 2014 compilation of Common Core-related questions and answers, the U.S. Conference of Catholic Bishops’ Secretariat of Catholic Education noted that proponents say the standards will help prepare students for college and the job market, while critics allege that the standards don’t allow for students’ varied learning styles, have reduced parental choice and caused federal overreach into schools.

Cook and Green said they believe much criticism of the Common Core actually arises not from the standards themselves, but from the flawed curriculum New York state developed to implement the standards. By definition, they noted, learning standards simply lay out the expectations for what students should learn, whereas curriculum dictates what is taught, when and how it is taught, and what materials are to be used.

Since diocesan schools are not required to follow the state curriculum, diocesan officials decided to create their own curriculum to address the Common Core learning standards, said Green, who called together the curriculum-writing committee before leaving his diocesan post for a position with the Greece Central School District. Green and Cook said they believe the new diocesan curriculum will reap the benefits of the Common Core’s high standards while correcting the flaws in the state’s curriculum. It also will infuse Catholicity into every subject area, Green said.

"We want to make sure we are addressing these learning standards, but in our own way," he explained.

The curriculum-writing project "gives our teachers a way to take those standards and incorporate them with the curriculum they’re writing out, and add the faith component," Cook added.

Cook said the Catholic schools of New York state’s eight dioceses always have sought to remain true to their Catholic mission while exceeding the minimum standards set forth by the state. In fact, the church’s Code of Canon Law calls for superintendents or directors of Catholic schools to ensure "that the instruction which is given in them is at least as academically distinguished as that in the other schools of the area." Parents of Catholic-school students seem to recognize this fact, trusting that teachers do their best to exceed the expectations set by the Common Core State Standards, Pohorence said.

That phrase sums up the guiding principles for Pohorence and the other teachers developing the new diocesan curriculum. She and a fellow second-grade teacher began working on the second-grade curriculum in May, after attending a May 1 orientation session at the diocesan Pastoral Center in Gates. Starting with English language arts, they went one unit at a time to develop general descriptions of each unit’s contents and the learning standards students should be able to meet after completing the unit. They also compiled lists of useful resources, activities they’ve successfully used when teaching those units, and ways to infuse Catholic content into the subject matter.

Smith noted that the Catholic faith will be infused into every subject. For example, a teacher helping her students learn their multiplication tables can enhance that lesson by reading them the Gospel story of Jesus’ multiplication of the loaves and the fish, she said.

The new curriculum will be a useful guideline, especially for new teachers, and will ensure a certain level of consistency across all the Catholic schools of the diocese. At the same time, it will allow enough flexibility for teachers to be creative and adapt to their schools’ unique resources and needs, Smith said.

"We’ll all be working from the same page with the ability for teachers and schools to adapt as they need to," she added.