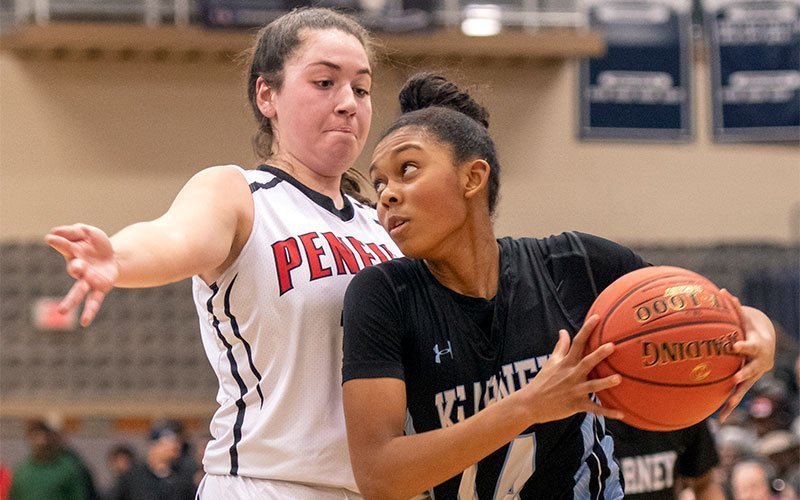 A sectional title for Bishop Kearney girls’ basketball, along with several team and individual titles in indoor track, highlighted a strong winter sports season for Catholic high schools in the diocese.

In their win over top-seeded Penfield, the third-seeded Kings rallied from a 26-17 halftime disadvantage, taking the lead for good early in the fourth quarter. Marianna Freeman scored a 19 points and Camille Wright had 13 to lead Kearney as the team raised its record to 20-3.

BK was scheduled to face Orchard Park of Section 6 in a state quarterfinal matchup March 14, but that contest has been postponed indefinitely due to concerns over a potential coronavirus spread.

Kearney’s path to the sectional title was marked by two lopsided victories. The Kings won 84-56 over No. 6 Webster Schroeder in quarterfinal play Feb. 28 as Freeman and Saniaa Wilson each scored 23 points, and 68-40 over No. 7 Victor in semifinal action March 2 behind 26 points from Taylor Norris. The Victor win ensured a 10th straight appearance in a sectional final for the Kings.

In the state championships March 7, Martin placed second in the 1,000, while the 3,200 relay took sixth.

Aquinas finished first in the Section 5 Class C meet Feb. 22, scoring 109 points to top second-place Le Roy’s 74. The Irish were led by two triple winners: Nile Colson in the 55- and 300-meter dashes and long jump, and Gabriel Giannini in the triple jump, high jump and pole vault. Also placing first was the 800 relay. Other top-three finishes came from Gian Malcolm, second in the 600 and high jump; Terrell Richards, second, 55; Gio Gonzalez, third, 300; and Joshua Watson, third, high jump. At the state meet, AQ’s top finish came from Giannini, who ended up 18th in the pole vault.

Also earning a Section 5 title Feb. 22 were the Aquinas girls, who topped the Class C field with 74 points to edge runner-up Le Roy’s 68. Event winners for AQ were Nia Williams-Matthews, triple and long jumps; Oo’marie Diggs, 55 dash; Chloe Henton, 300 dash; and the 800 relay. Other top-three finishes came from Henton, second, 55; Diggs, second, 300; and Williams-Matthews, third, 55 hurdles. Williams-Matthews went on excel at the state meet, finishing fourth in the triple jump and fifth in the long jump.

‚Ä¢ McQuaid boys’ basketball reached the Section 5 Class AA final. The Knights, seeded fourth, won 71-55 over No. 13 Webster Schroeder in first-round action Feb. 25 behind 26 points from Kobe Long; 84-68 over No. 5 Webster Thomas in quarterfinal play Feb. 28 as Jermaine Taggart scored 25 and Long and Keith Warren had 21 each; and 61-60 over top-seeded Victor in semifinal play March 3 as Taggart had 26, including three deciding free throws with 5.2 seconds left. McQuaid’s season was ended by No. 2 University Prep, 81-76, in the title game March 7. The Knights’ final record was 16-8.

‚Ä¢ Bishop Kearney boys’ indoor track placed second at the Section 5 Class D meet Feb. 21. First places for the Kings came from the 800 relay and Jahlique Johnson in the high jump. Second places were earned by Johnson in the 55 and Aneudys Duran in the 300, and third places were recorded by Ryan Lewis in the 3,200, Patrick Martin in the 600 and the 1,600 relay.

‚Ä¢ Elmira Notre Dame’s Alyssa Walker, competing in the Section 4 girls’ indoor track state qualifier Feb. 15, placed first in the 1,000 meters while Crusader teammate Rachel Simpson took third in the 600. Walker went on to finish 21st in the 1,000 at states.

‚Ä¢ Bishop Kearney girls’ indoor track was led at the Section 5 Class D meet Feb. 21 by Lilly Wellman, who placed first in the high jump; and Michelle Russotti, third in the shot put. Wellman then logged a top-10 finish at states, taking eighth in the high jump.

‚Ä¢ In boys’ swimming, McQuaid got second places from Max Murray in the 200-yard individual medley and 100 backstroke events at the Section 5 Class A championships Feb. 14. Other top finishes came from Julian Joseph, second in the 100 butterfly and third in the 50 freestyle; 400 freestyle relay, second; and 200 medley relay, third. Murray went on to place 10th in the 100 backstroke at the state championships March 7.

‚Ä¢ In wrestling, McQuaid’s Patrick McCray placed third in the 132-pound weight class and Brandon Perrone was fourth at 160 pounds at the Section 5 Class A2 meet Feb. 8.

‚Ä¢ Our Lady of Mercy girls’ basketball reached the Section 5 Class AA Final Four. The fourth-seeded Monarchs won 95-10 over No. 13 Edison Tech in first-round play Feb. 25, then defeated No. 5 Fairport by a 57-43 count in quarterfinal action Feb. 28 before falling to Penfield, 53-38, in the March 2 semifinal for a final record of 17-6.