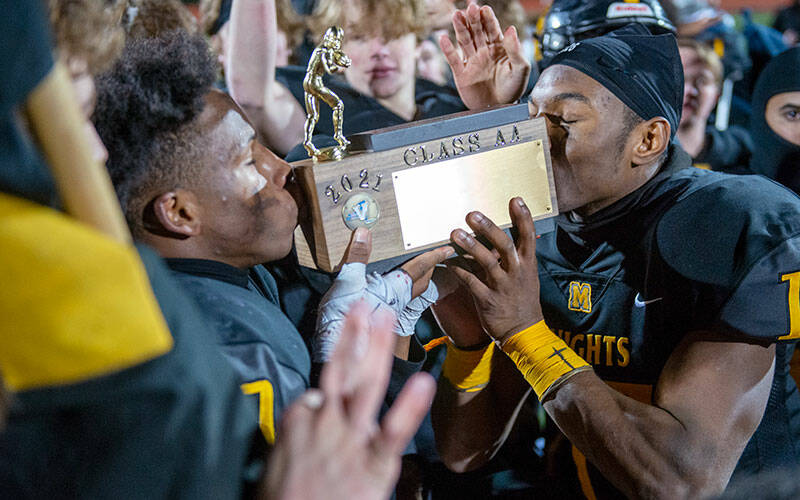 The fall high-school sports season was an outstanding one for Elmira Notre Dame girls’ soccer and Our Lady of Mercy girls’ golf, which each won sectional team crowns, as well as McQuaid Jesuit runner Jayson Chichelli and Mercy golfer Julia Zigrossi, who earned individual sectional titles.

The Crusaders claimed the Section 4 Class C title and went on to the state Final Four.

Top-seeded Notre Dame earned the sectional championship with a 1-o win over No. 2 seed Lansing in the Section 4 Class C title game Oct. 30. The Crusaders’ Ava Mustico got the game’s only goal with 4:42 remaining, and goaltender Shannon Maloney and the ND defense earned the shutout. Preceding that win was a 4-1 semifinal victory over No. 5 Oxford in sectional semifinal play Oct. 27 as Leila Vargas scored two goals and Mustico and Rachael Simpson had one each. The Crusaders had nearly been upset in their sectional quarterfinal against No. 8 Union Springs/Port Byron Oct. 23, playing to a 1-1 overtime tie on a goal by Simpson, but they advanced by winning 3-1 in a penalty-kick shootout.

In state Class C quarterfinal play Nov. 6, Notre Dame scored a 1-0 victory over Sauquoit Valley of Section 3 — which came into the game with a perfect 19-0 record — thanks to a first-half goal by Mustico with Maloney recording the shutout. However, ND was stopped, 2-0, by eventual champion Ausable Valley of Section 7 in the semifinal round Nov. 13. The Crusaders’ only loss of the season gave them a final record of 13-1-3.

The Monarchs were dominant at the Section 5 golf tournament, capturing both the team and individual titles at Irondequoit Country Club.

Mercy won the team crown by placing four golfers in the top eight, including Zigrossi who placed first with a 78. Also helping the Monarchs to their first-place team finish were Sophie Cellura, who finished fourth with an 86; Marisa Eichas, who was seventh with a 91; and Riley Stuver, who was eighth with a 92. The Monarchs’ team total of 347 was a full 30 strokes lower than second-place Victor (377).

In individual sectional competition — which combined the Oct. 10 team results with a second round on Oct. 12 — Zigrossi posted a 75 for a winning two-day total of 5-over-par 153, while Mercy teammate Cellura came in second at 86-80 for a 166. By placing among the top nine golfers, Zigrossi and Cellura qualified for the state championships to be held next spring. Also advancing to states were Eichas, who went 91-86 for a 177 to place seventh; Stuver, who went 92-89 for a 181 to tie for eighth; and Aquinas Institute’s Emily Ferguson, whose rounds of 96 and 85 also tied for eighth at 181.

Chichelli ran to victory for the Knights in the Section 5 Class B championships held Nov. 6 at Letchworth State Park. He posted a time of 16 minutes, 4.1 seconds to finish well ahead of Pittsford Mendon’s Nico Valentine, who came in second at 16:28.7. Chichelli’s run marked the best time in any sectional classification. Placing third individually in Class B was McQuaid’s Collin Brown, whose time was 16:38.8. The high finishes by Chichelli and Brown helped McQuaid to a second-place team showing.

Chichelli went on to a fifth-place finish in Class B at the state championships Nov. 13. He ran the Chenango Valley State Park course near Binghamton in 16:18.8, while Brown turned in a 12th-place performance in 16:37.8.

• McQuaid boys’ soccer had an outstanding regular season, winning 14 of 15 games to earn the No. 1 seed in the Section 5 Class AA playoffs. The Knights then won 9-0 over N0. 8 WOIS/Edison/Franklin/SOTA in quarterfinal play Oct. 22 as Andrew O’Neill, Andrew O’Hern and Elliot Aguirre had two goals each. However, McQuaid was stopped in the semifinals by No. 4 Fairport, 3-2 in overtime, in semifinal play Oct. 28. The Knights’ final record was 15-2-0.

• Mercy’s Emma Spagnola cracked the top 10 at the Section 5 Class A girls’ cross-country championships Nov. 6, placing ninth with a time of 19:36.7 at Letchworth State Park.