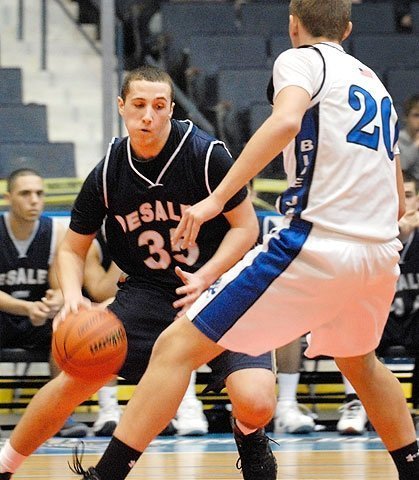 Simply put, there’s likely never been a more collective display of post-season dominance by Catholic high schools in this diocese.

Of the 10 varsity teams at six institutions, a staggering seven — the boys’ and girls’ squads from Aquinas Institute, Bishop Kearney and Elmira Notre Dame, along with the boys from Geneva DeSales — won sectional titles. Another — the Our Lady of Mercy girls — finished as runner-up.

Three of those sectional champions went on to reach the state Final Four with the Aquinas boys making a title-game appearance and the AQ girls and BK boys reaching the semis.

Down by as many as 14 points in the third quarter, Aquinas rallied to go ahead midway through the final period before the Knights forged back ahead for the win. AQ’s Phil Valenti had a monster effort with 33 points and 10 rebounds.

The state final was preceded by a 50-41 semifinal win over Baldwin of Section 8 on March 17 as Valenti had 21 points and 11 rebounds and Jarron Jones added 13 points and 16 boards. Aquinas had reached the Final Four with a 57-49 quarterfinal victory over Niagara Falls of Section 6 on March 10 behind 30 points and 16 rebounds from Valenti.

Earlier in the post-season, top-seeded Aquinas earned the Section 5 Class AA1 crown with a 63-57 title-game win over No. 3 Webster Schroeder on March 3 as Valenti had 26 points and 12 rebounds. The Irish also upended East High, 76-66, in the state qualifier on March 7 as Jamahl Pardner and Valenti had 21 points each. In games prior to the sectional final, AQ won 75-60 over No. 8 Webster Thomas in a Feb. 24 quarterfinal as Valenti had 23 points and Christian White added 21; and 72-63 over No. 4 Hilton in a Feb. 28 semifinal with Valenti hitting for 24 points.

Despite being a No. 9 seed, the Irish copped the Section 5 Class B title by winning 75-56 over No. 3 Wellsville in the final played March 2 as Nicole Bini knocked down 34 points. Earlier in sectionals, Aquinas won over 77-54 No. 8 Bath-Haverling in first-round play on Feb. 21 as Bini amassed 42 points; 73-65 in double overtime over No. 1 Newark in a Feb. 24 quarterfinal as Bini scored 31 points and Teja Reaves had 21; and 78-62 over No. 5 Hornell in a Feb. 28 semifinal behind Bini’s 30 points. Bini scored an astounding 137 points in her club’s four sectional games.

The Irish went on to win 58-37 over Olean of Section 6 in the state Class B quarterfinals on March 9 as Bini had 22 points. However, Aquinas fell 47-41 to South Jefferson of Section 3 in semifinal play on March 16. Reaves had 19 points as Aquinas finished with a 15-9 mark.

The Kings, seeded No. 4 in Section 5 Class A, won the title with a 55-48 decision over No. 7 Pittsford Mendon in the final on March 3 as Chinonso Obokoh totaled 15 points, 14 rebounds and four blocks. BK scored the game’s final nine points.

After capturing sectionals, BK won 64-43 over East Aurora of Section 6 on March 10 in a state Class A quarterfinal as Thomas Bryant had 15 points. The Kings’ season ended with a 57-53 semifinal loss to Harborfields of Section 11 on March 17 despite Antoine Anderson’s 16 points and a fourth-quarter rally that saw BK cut a 19-point deficit to three. Kearney’s final record was 17-7.

BK’s season ended with a 64-59 loss to Perry in a Class C state-qualifying game on March 3. Graham topped BK with 21 points. The team’s final record was 15-7.

The Crusaders, seeded third in Section 4 Class C, upended top-seeded Groton with a 60-54 title-game win on March 3. ND surrendered the game’s first 10 points and trailed 28-18 at halftime, but scored the first 12 points of the third quarter to go ahead. ND’s Shane Manning and Tom Agan had 22 and 15 points, respectively.

The Crusaders’ season ended in the state Class C quarterfinals as they lost 63-49 to Cooperstown of Section 3 on March 10. Matt Davis had 19 points to lead Notre Dame, which posted a final mark of 19-3.

Notre Dame, seeded fifth in Section 4 Class C, stopped top seed and previously undefeated Harpursville, 60-49, in the title matchup on March 3. The Crusaders led 36-23 at halftime and hung on despite seeing their advantage shrink to one. Sheridan Heine led ND with 23 points while Detta Gublo finished with 19 and Olivia May had 14.

ND’s season ended with a 67-55 loss to Little Falls of Section 3 in the state Class C quarterfinal game on March 10 despite 23 points from Gublo. The Crusaders finished with a 16-6 record.

The Saints, seeded No. 2 in Section 5 Class D2, claimed the title with a 69-56 triumph over top-seeded Whitesville on March 3. DeSales took a 16-point lead in the first half and had its advantage cut to three in the third quarter before finishing strong for the win as Kayshawn Nelson had 17 points and Michael Cragg and Tom Kanaley added 14 each.

The Saints’ season ended with a 69-64 loss to Batavia Notre Dame in the state Class D regional qualifier on March 6. Kanaley had 23 points for DeSales, which earned a final record of 16-6.

The Monarchs, seeded No. 3 in Section 5 Class AA, won 56-50 over No. 6 Victor in quarterfinal play on Feb. 22 as Dani Naylon had 18 points. That was followed by a 50-32 semifinal victory over No. 10 Canandaigua on Feb. 27 with Samantha Sorge scoring 12 points, Naylon adding 11, and Julia Delgatti and Tylar Guerrieri netting 10 each.

Mercy was derailed by top-seeded Greece Athena, 65-36, in the March 1 final with Sorge’s seven points leading the Monarchs. Mercy’s final record was 13-8.