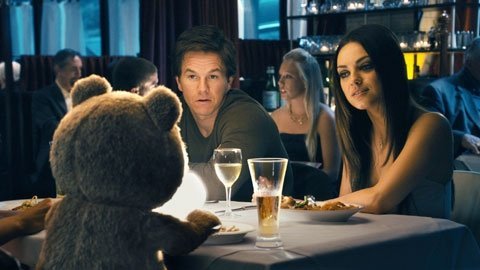 NEW YORK (CNS) — The familiar Hollywood trope of the grown man who cannot grow up gets a fantasy twist in the sporadically funny, but excessively vulgar comedy "Ted" (Universal).

Given that the film represents the big-screen launch of television’s Seth MacFarlane — aka the "Family Guy" guy — devotees of that series will know pretty well what to expect from the start.

MacFarlane, who directed and co-wrote (with Alec Sulkin and Wellesley Wild) uses a mix of live action and computer-generated animation to chart the long-standing friendship between slacker John Bennett (Mark Wahlberg) and the titular teddy bear (voiced by MacFarlane). As opening scenes set in 1985 explain, John was a lonely child who longed for friends. One Christmas, he made a wish that his favorite plush toy would come to life and be his best buddy forever.

And so it miraculously came to pass.

Jump ahead to the present where the unshakable bond between these two is being tested by tensions surrounding John’s romance with successful PR executive Lori (Mila Kunis), his live-in girlfriend of four years’ standing.

Due in large part to Ted’s negative influence, John is going nowhere fast. Not only has he so far failed to put a ring on it, professionally he’s underachieving in his work as a car rental agent. That’s hardly surprising, since he tends to spend a large percentage of the workday smoking pot with Ted.

Along with a love of illegal substances, MacFarlane endows the anything-but-cuddly Ted with a foul mouth and a taste for the company of prostitutes. Though he eventually displays good intentions and even self-sacrificing concern for John’s best interests, Ted’s loutish ways endure. Presumably meant to register as amusing, they instead grind against the grain.