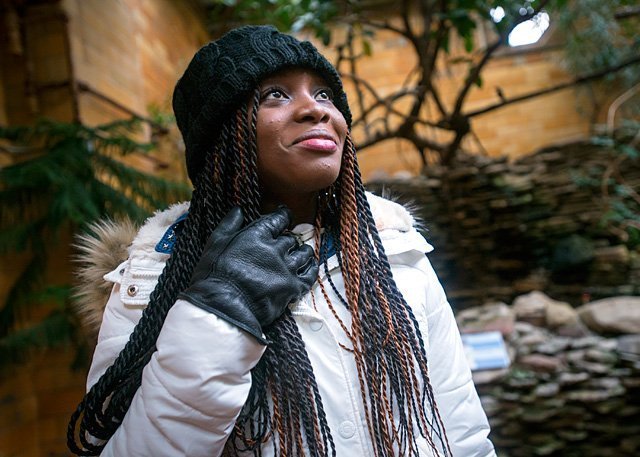 Shana Campbell takes a tour of Rochester’s Seneca Park Zoo during a visit on Jan. 4, 2016.

"I have to keep fighting and put my faith in God."

Those are the words Shana Campbell said to Deacon Kevin Carges last fall, just weeks after undergoing her fifth surgery in three months. Deacon Carges said that although Campbell, 18, has been through more trauma and disappointment than most people, she refuses to give up on either her fight or her faith.

"She realizes that she’s gone through something that she may be able to use to help others," Deacon Carges said. "She’s come a really long way. It’s really been a long journey for her."

Deacon Carges, who grew up in Elmira and serves at Our Lady of Peace Parish in Geneva, met Campbell in Jamaica in 2015, less than two years after she survived a brutal machete attack at the hands of her own father. The attack left Campbell, who was 15 at the time, with scars all over her body and the need for a tracheal tube in her throat. The tube helped her breathe but prevented her from talking without putting her finger over the hole in her throat, and it sometimes became infected and jeopardized her health.

Doctors in Jamaica were unable to do anything to improve Campbell’s situation, according to Deacon Carges, who frequently travels to Jamaica to work on projects for Eight 4 World Hope, a charity he founded with seven of his fellow alumni of St. John Fisher College in Pittsford. Deacon Carges was moved by Campbell’s story and reached out to more than 30 doctors, both in Jamaica and the United States, to see if any of them could help the teen. Most of the doctors told Deacon Carges they couldn’t help him, but eventually two local doctors helped put him in touch with Dr. Robert Lorenze, an otolaryngologist — or ear, nose and throat specialist — at the Cleveland Clinic who could perform the complicated surgery necessary to repair Campbell’s trachea.

Deacon Carges immediately set out to raise enough money to cover Campbell’s surgery, which the Cleveland Clinic estimated would cost at least $35,000. He brought Campbell to the United States in December 2015 to meet with Lorenze, and continued raising money after she returned to Jamaica in January 2016. He raised the needed funds by early June 2016, when Campbell returned to the United States for the surgery. During the operation, Lorenze removed two inches of her damaged trachea, moved the rest of her trachea up two inches and then reattached it below her vocal chords.

"That removed a lot of the scarring problems in her throat and opened up her airway, but the surgery created a lot of swelling in her throat. They anticipated it would start to dissipate in a week or so, but it never did," Deacon Carges explained.

Lorenze operated on Campbell three more times in July, using first a balloon and then a tube to keep the swelling in the teen’s throat in check as she healed. A fifth surgery in August opened her airway enough to allow her to finally be able to breathe and talk without the tracheal tube most of the time, but she still can’t get enough air when she engages in any sort of physical activity, Deacon Carges said. Campbell most likely will undergo a sixth surgery this summer in order to correct that issue, he added.

After recovering from her fifth surgery, Campbell was healthy enough to make the trip back to Jamaica and go to school for the first time since she was attacked in 2013. Being back in school is exciting yet difficult for Campbell, especially since she is an 18-year-old in a ninth-grade class with 14- and 15-year-old classmates. Having to endure multiple operations rather than just one also has been hard on Campbell, and the teen is disappointed that she still needs a tracheal tube, which prevents her from swimming, among other things, Deacon Carges said.

Nonetheless, Campbell tries her best to find the good in her current situation. She’s thought about becoming a doctor or a social worker in the future, and believes her own story can be an inspiration to those who are suffering or facing seemingly insurmountable challenges, Deacon Carges added.

"Maybe that’s part of the reason this journey hasn’t been easy," he mused. "As I reflect on it, maybe that’s part of it, to let others know that sometimes the journey is going to be difficult. It’s going to have defeats and difficulties over the way, but you can’t give up. You have to keep moving forward."

Campbell credits her faith in God for giving her the strength and determination to keep moving forward. God already has answered so many of her prayers and this gives her hope, she told Deacon Carges. Campbell also is grateful for the support of Deacon Carges and his family, who have welcomed her into their home on several occasions, as well as the financial support she’s received from many people throughout the diocese.

"When I feel like giving up I know Kevin won’t give up, so I can’t and won’t either," Campbell said.