Teen 'takes the plunge' into his faith - Catholic Courier 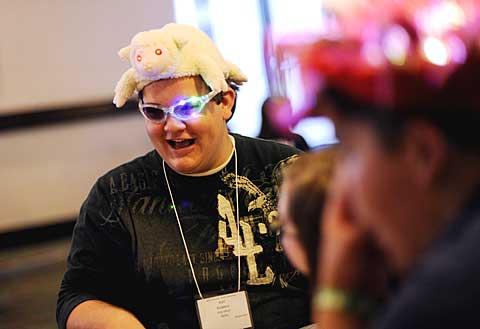 Karl Kodweis, a parishioner of Our Mother of Sorrows Parish in Greece, has some fun during a workshop that was part of the annual Diocesan Youth Convention Aug. 7.

This resonated during the Aug. 7-9 Diocesan Youth Convention held at the RIT Inn and Convention Center that I recently attended. In the back of my mind, I thought that it would just be a group of 25 to 50 people that would sit in a circle and talk about the Bible and Jesus. I found out that I couldn’t have been more wrong. This event was far different from what I had expected. There were more than 300 teenagers like myself who gathered together to learn and share more about what it means to be a teenage Catholic in this day and age.

When I arrived at the convention, I was amazed to see that kids from all over the Rochester Diocese joined together in the giant ballroom to share the one thing we all had in common: our faith. I came with two other kids from my home parish of Our Mother of Sorrows in Greece, and we joined the group from Holy Ghost in Gates. Instantly, friendships were formed. After we got to our rooms and unpacked, we all met in the giant ballroom again where we were introduced to the theme of the convention, which was to "Take the Plunge" into our faith.

The Diocesan Youth Committee, which organized this convention, was hoping that "Take the Plunge" would allow those of us who gathered to jump off and leap forward to formulate a stronger faith. Not only did they use decorations that made us feel as though we were in the ocean, they developed the presentation themes to complement that. Once we were introduced to the theme, members of DYC put on a skit to open the convention. Scenes from the Disney Pixar’s movie "Finding Nemo" helped get that message across as well.

Then the keynote speaker, Catholic singer/comedian Jesse Manibusen, came on stage. From that moment on, the convention took off. I felt that my faith grew the most because he made learning about God in his message fun. Throughout the two days that followed, we had a lot of time to just sit and listen to what Jesse had to say. Whether it was his story about how he wanted to become a Beatle or a story about Oreos and doughnuts, it always combined a Christian message with laughter. From the frequent chanting of "Who is the church?" "We are!" to "Where is the church?" "Right here!"there were many times that we were reassured about our role in the Catholic Church. He talked to us about how he grew up and how the choices his mother made for him regarding his singing had led him to this point. At times when he was speaking, he would completely switch tones in his voice whether the topic was personal with a message or humorous. Personally, he was a huge influence on me that weekend in helping me take the plunge deeper into my faith.

The convention included workshops with topics ranging from the role of faith in our lives to how popular music plays a role in our journey toward God. I attended the workshop about the role of faith in our lives and how we should be our true selves. Through this workshop, I learned to act as if Jesus were standing right there with me and make decisions that would mimic my relationship with him. The second seminar was on sex, relationships and peer pressure. During the workshop, I learned a lot about how I have to make my own decisions and not let other people and things pollute my mind. The convention also helped me as a person to find out how the Catholic Church viewed these and many other topics.

We took time out on Saturday night to party with D.J. Bill, who is a long-standing partner with our diocese, and have a good time dancing. The highlights of the evening included the "Electric Slide" and the famous Catholic dance. It did not matter if you could dance or not, we all had a great time doing whatever type of dance we could.

With the weekend coming to a close, we gathered for Mass Sunday morning in the ballroom that had become our gathering place. With Bishop Matthew H. Clark there to celebrate with us and Jesse to assist with the music, members of DYC helped make this a very special experience. During the final ceremony Sunday afternoon, the current members of the DYC, who had served their two-year terms, stepped down. The new members — including myself — were introduced and inducted for their two-year terms.

After being at this convention and witnessing DYC members’ abilities to organize the event and promote their faith, I was really looking forward to serving on the committee.

Kodweis is a parishioner of Our Mother of Sorrows Parish in Greece and a new member of the Diocesan Youth Committee.